At a glance, flat-leaf parsley and cilantro look practically the same. They’re easy to get mixed up, but in some dishes, they shouldn’t be used interchangeably. Other than their appearance, everything else about these two popular herbs is different.

This guide compares parsley and cilantro (also known as coriander). We compare their flavor, appearance, uses in the kitchen, and nutritional benefits. Be sure to also check out our cool infographic at the end of this page.

What’s the difference between parsley and cilantro?

Parsley is a bold, fragrant herb that has a grassy flavor and pointy leaves. It’s excellent in tabbouleh, pasta, or stirred into a white sauce for pouring over fish. Cilantro is a fresh, lemony herb that has leaves with rounded ends. It is more fragrant than parsley and is perfect for salsa, guacamole, curries, and Asian salads.

RELATED Parsley Care Guide: How To Harvest Parsley Without Killing The Plant

Comparing the flavor and aroma

If you’re looking for a high-impact flavor punch, then cilantro will be your best choice. It’s used in many Mexican dishes such as salsa verde. Without it, some dishes would lack color and vibrancy. 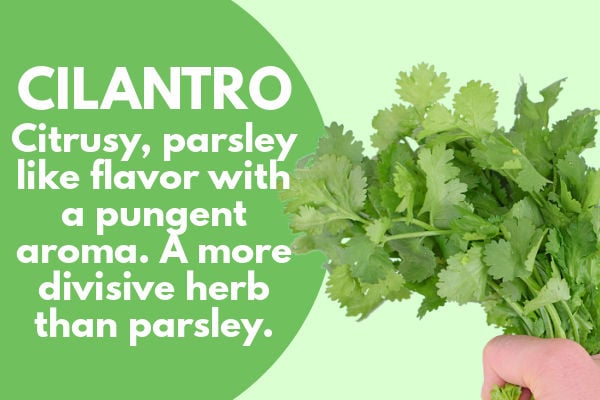 Cilantro leaves taste like a combination of citrus and parsley and they have a pungent aroma that is sweet, lemony, and peppery.  Compared to parsley leaves, you’ll notice that cilantro has a much stronger smell. This is an excellent way to tell them apart at the grocery store if the labeling isn’t clear.

People often describe the taste of cilantro differently. While some love its citrusy punch, others describe it as soapy or metallic. It is a much more divisive herb than parsley.

Parsley has a mild flavor that is grassy and earthy with a little bitterness. It won’t overpower the other ingredients and is excellent for adding color to salsa verde or chimichurri, as well as texture to pasta. Tabbouleh and white sauce also benefit from the addition of parsley. 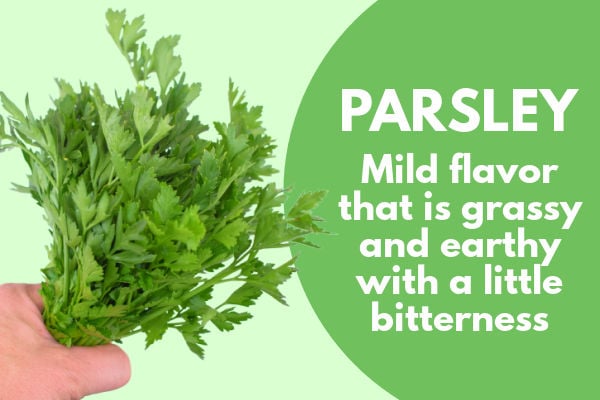 The fresh leaves are fragrant but lack the intensity of cilantro. They are perfect for adding brightness to food without overpowering it. The fresh leaves add color to dishes and balance the flavors. It is a common ingredient in Italian cooking for these reasons.

Did you know? In some parts of the world, flat-leaf is called Italian parsley.

Parsley and cilantro look very similar. They are both herbs with long, thin stalks and flat green leaves. If you look more closely, you’ll notice the ends of the leaves are a giveaway. 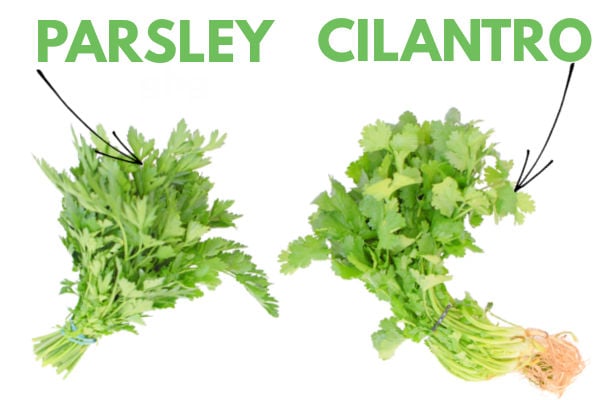 Parsley and cilantro can be used fresh or added at the end of cooking. They both add brightness to heavy dishes and can be chopped up to add flavor to recipes.

Cilantro has a stronger flavor and can stand up to other strong flavors well. It is great added to Thai salads and Mexican dishes that are packed with chili or cumin.

In the kitchen, the parsley leaves are often chopped off and the stalk is discarded. However, the stalks are edible and they can be sliced finely and added to food like casseroles or pasta sauce for added nutritional value.

The leaves are commonly used in Asian, Italian, and Middle Eastern cooking. They work well as a garnish but can also be used to help season sauces, soups, casseroles, and much more.

Some common dishes using parsley include:

The entire cilantro plant can be used in cooking, including the stem and leaves. Flavorful Mexican and Indian cuisine benefits from this herb, adding punchy flavor and balancing heavy meaty dishes.

Cilantro can be a divisive ingredient so don’t overdo it. If you’re cooking for guests, you may want to check if they like it before adding. Too much cilantro can overwhelm the dish - it may taste unpleasant, even to people who enjoy the herb.

Common uses for cilantro are:

How to store your herbs

To get the best from your herbs, parsley or cilantro can be stored in the same way. Follow these simple steps for best results.

Cilantro and parsley offer more than just flavor, sharing some similarities in nutritional benefits. Both are good sources of vitamin A, C, and K along with powerful antioxidants. They are both useful for assisting bone and heart health, boosting immunity, and helping to regulate blood sugar levels. 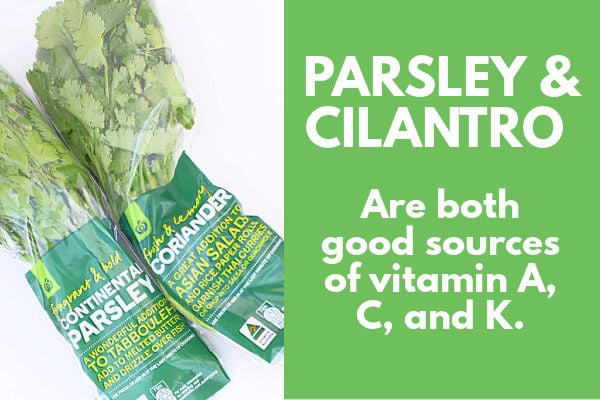 Each herb also has some unique benefits of its own. Parsley offers useful levels of iron and helps to aid digestion and relieve bloating. It also contains myricetin, which has been found to decrease insulin resistance.

Can I use parsley instead of cilantro?

Parsley and cilantro have different flavor profiles and each has specific uses in the kitchen. While it's possible to use the herbs interchangeably, you’ll get a much different tasting dish, depending on which option you choose. Here are some examples of where we’d happily swap one herb for the other:

What’s the difference between curly parsley and Italian parsley?

Italian parsley is also known as flat-leaf parsley and has pointy flat leaves. Curly parsley has ruffled leaves and less flavor than the Italian variety. Curly is best for garnishing while Italian is often the preferred option for adding a more robust flavor to recipes.

Parsley and cilantro have a similar appearance so it’s easy to mix them up. They are comparable in size and color, with long green stems that have flat leaves. But these herbs have different aromas, tastes, and uses in the kitchen.

The potency of cilantro can mess with a dish if it’s overused. It is also a divisive ingredient that some people won’t enjoy, no matter how well you follow the recipe. Parsley is less divisive, but it will struggle to hold its own in punchy dishes like spicy Mexican and Thai dishes.