Oyster chowder (aka oyster stew) is very similar to classic clam chowder. It is a creamy, thick type of soup that is hearty and delicious. There is a wide range of variations to this dish, depending on the city you visit; Manhattan has a red version, in Rhode Island, it is often clear, but this recipe is a New England-inspired white chowder.

With this recipe, you’ll use canned oysters so they have already been cooked. This means they only need a few minutes of cooking time to warm them up. Overcooking this seafood will turn them into rubbery, unpleasant chunks so watch your dish carefully towards the end of the cook. 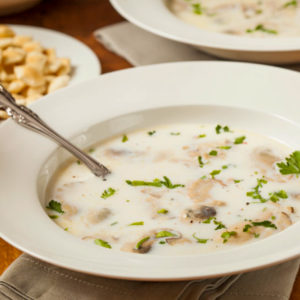 Oyster chowder (aka oyster stew) is very similar to classic clam chowder. It is a creamy, thick type of soup that is hearty and delicious. There is a wide range of variations to this dish, depending on the city you visit; Manhattan has a red version, in Rhode Island, it is often clear, but this recipe is a New England inspired white chowder.
5 from 1 vote
Print Recipe Pin Recipe
Prep Time 10 mins
Cook Time 20 mins
Total Time 30 mins
Course Soup
Cuisine American

Keyword chowder, oyster chowder, soup
Tried this recipe?Let us know how it was!

3 tips to improve the chowder

1. Work on the texture

To make a thicker chowder add a half cup of broken crackers when the oyster juice is added. You can also add a knob of butter just before serving and stir it through to increase the richness of the dish.

If using canned oysters then perform a taste test and if necessary season with salt.
Worcestershire sauce is an excellent addition to the recipe. Add a splash or two and mix into the soup before adding the oysters.

Consider using fresh oysters in this recipe if you prefer. You’ll need to include one quart of bottled clam broth as well as the oyster liquor which is found inside the fresh shellfish. You can also toss in fish, scallops, mussels, and clams to add more flavor and to create a more visually appealing dish.

Related reading:
Discover how mussels taste and if they’re worth your money.
Find out what a sea urchin tastes like.
Get the recipe for geoduck sashimi.

What goes with oyster stew?

Some excellent foods to pair with oyster stew are scalloped potatoes and garden salad with a vinaigrette to bring some freshness, crunchy texture, and acidity to the meal. The bitterness of rocket leaves is a good option because their bitterness provides some relief from a heavy, rich chowder. If you decide to serve wine, then a nice bottle of Riesling will work well. Prefer red? Choose a Cabernet Sauvignon for the perfect meal.

How long does oyster stew last?

Oyster stew will last 3-4 days in the refrigerator, stored in an airtight container. It is also suitable for freezing for up to two months. When it’s time to reheat the stew, allow it to thaw in the fridge overnight, then slowly heat it in a pot, without letting it boil. Microwaves are too severe and may result in an unpleasant split liquid.

What are oyster crackers?

How can I make this dish look fancier?

The secret to making authentic oyster chowder look “up-market” is to top each bowl with a garnish of mini toast that has been dolloped with sour cream, then scattered with caviar and fresh parsley. If you’d like to learn how caviar and roe differ, check out our in-depth article.

Oyster chowder is a homely, inviting meal that is hard to resist on a cold night. The creaminess combines deliciously with the potato, bacon, and oysters. The best part about this recipe is that the seafood comes from a can, so there’s no need for seafood preparation - a chore that many dislike.

What is your favorite type of chowder? Please let us know in the comments below.