The main difference between Maruchan and Nissin noodles is their broth taste and noodle texture. Maruchan has softer noodles with a creamy and light broth, while Nissin offers chewier noodles with a more flavorful broth. 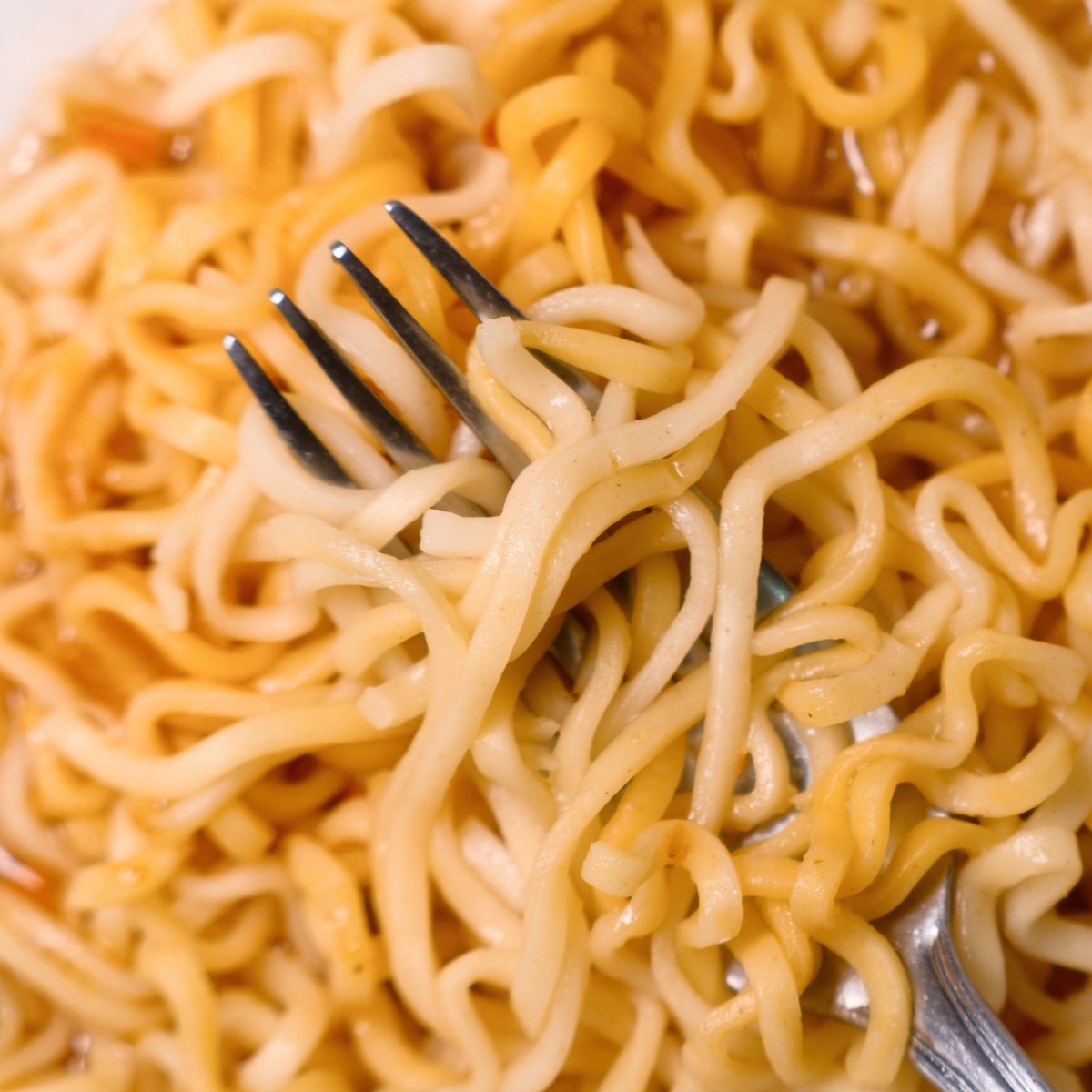 Maruchan and Nissin are two of the most popular noodle brands worldwide. While both originated in Japan and have numerous variants, they have several differences that you might want to know.

Read on as I thoroughly differentiate Maruchan and Nissin in terms of origin, flavor variants, ingredients, broth taste, noodle texture, nutrition, price point, and distribution. This article will also give healthier recipes using instant noodles, so be sure to read until the end.

Maruchan vs. Nissin: Origin and History

Maruchan noodles have been a staple of Japanese cuisine for over 50 years. The story of Maruchan noodles began in 1953, when Toyo Suisan Kaisha founded his company in Japan and branched out to make instant noodles in 1961.

The company's mission was to bring a new, delicious, affordable noodle product to the Japanese market, with instant ramen noodles as their first product.

Maruchan quickly expanded its reach and began to export its noodles to the United States in 1977.

Today, Maruchan ramen is one of the most popular instant ramen brands in the United States that you can find in most grocery stores, including instant ramen, cup noodles, and yakisoba.

Nissin's instant noodles were first invented in 1958 by Momofuku Ando, the founder of Nissin Foods. After witnessing the post-World War II food shortages, Ando wanted to create an easy and affordable food option for people everywhere.

He got inspired by the traditional Japanese food ramen, a type of noodle soup, and began experimenting with freeze-dried noodles. After years of perfecting his recipe, he released the first Cup Noodles product in 1971.

In 1973, Cup Noodles reached the United States and instantly became popular due to their convenience.

The company now produces over 50 flavors and variations of Cup Noodles, which are available in over 80 countries.

There are over 60 different flavors of Maruchan noodles available, with some of the most popular being chicken, shrimp, beef flavor, oriental, chili, Picante beef, and vegetable, which are free from artificial flavors and colors.

Aside from instant noodles and cup noodles, Maruchan has a product line called Instant Lunch, Ramen Bowl, and Maruchan Gold. None of the Maruchan variants are vegan, as all their seasonings contain animal products.

Nissin claims to use no artificial flavor in its products while maintaining the authentic Nissin taste. The most famous Nissin food products include Cup Noodles, Top Ramen, and Instant Noodles.

While each noodle variant contains different ingredients, I could compare Maruchan's and Nissin's beef ramen. Right off the bat, I first noticed the use of bioengineered food products in Nissin's ingredients list. However, Maruchan did not state that their products are non-GMO.

Aside from that, Nissin beef ramen declared the allergen information in their product, including wheat, eggs, soybeans, and milk.

On the other hand, Maruchan beef ramen has wheat and soybeans but no egg or milk in its ingredient list.

Below is a quick overview of each product's ingredient list.

There's no "better" when it comes to comparing the broth of Nissin and Maruchan noodles, but rather a personal preference.

Nissin noodles offer a savory and flavorful broth. The broth has a delicate balance between the salty and umami flavors, with a hint of sweetness from the vegetable-based broth. The broth is light yet rich, with a slight hint of ginger and garlic that adds depth to the flavor.

On the other hand, Maruchan noodles' broth has a rich, creamy, and savory flavor, with a hint of sweetness that adds a unique twist.

The broth has a blend of spices, giving it a deep, earthy flavor. It has a warmth to it that can be both comforting and satisfying. Overall, Maruchan has a lighter broth than Nissin.

I like Nissin's more straightforward flavor profile, as you can quickly identify the flavors. You will enjoy Nissin noodles if you like a more flavorful soup. On the other hand, you will love Maruchan if you want noodles with a creamy and lighter flavor profile.

Pro tip: I suggest only putting a little bit of oil or skipping it all to avoid tasting the oil film in your noodles.

Maruchan noodles are springy yet soft, and they cook well after three minutes of boiling. I also noticed that if you let the noodles sit in the boiling water or hot water for longer, they tend to be mushy, so consuming them immediately is a must.

On the other hand, Nissin noodles are light and smooth, with a slight chewiness. You will notice that the noodles are thin yet still hold their shape well when boiled and have a slightly springy texture. Moreover, Nissin noodles absorb the broth's flavor better.

For this comparison, I looked at the nutrition information on the back of the packages of the beef ramen from both brands.

Both brands offer the same calories (380 calories), total fat, and saturated fat content. However, Maruchan beef ramen has a higher sodium value of 1580 milligrams compared to the 1330 milligrams of sodium in Nissin.

Cup noodles are unhealthy as they are full of carbohydrates and sodium and contain few essential nutrients such as vitamins and minerals. But cup noodles were made to be a quick and easy food for emergencies, so people shouldn't eat them all the time.

Here's a quick comparison of the complete nutrition facts for both brands:

Maruchan and Nissin product prices depend on the product line and flavor, but Maruchan is generally cheaper than Nissin.

Nissin noodles are primarily distributed in Japan and other Asian countries. Still, you can also find them in many parts of the world, including North America, Europe, Australia, South America, and Africa.

On the other hand, Maruchan focuses its product distribution in the United States and Canada.

How To Make Instant Noodles Healthier

A healthier way to make instant noodles is by skipping the seasoning or flavor packet (or adding just a little) and adding vegetables. Here are my top favorite instant noodle recipes, which you can follow at home. 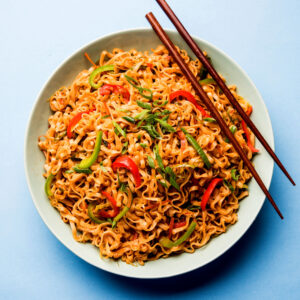 A traditional Asian stir-fry, but with a twist! You can even add more vegetables, like cabbage or bok choy, to make this a well-rounded healthy dish.
5 from 1 vote
Print Recipe Pin Recipe
Total Time 15 mins
Course Dinner
Cuisine Asian
Servings 2
Calories 433 kcal 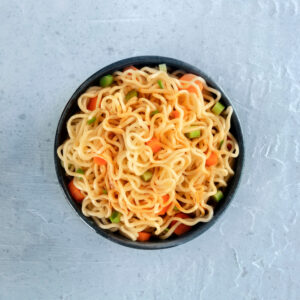 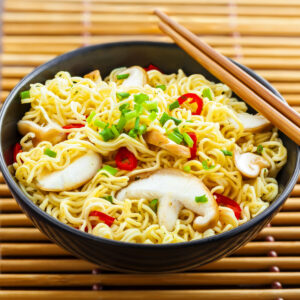 No, instant noodles are not healthy, as they don't provide essential nutrients and are high in sodium, carbohydrates, and calories. However, you can still have it when you need convenient food.

What are other famous noodle brands?

Can you eat canned goods with cup noodles?

While you can eat both at the same time, I don't recommend doing that, as both instant noodles and canned goods are high in sodium and saturated fat, which are unhealthy.