The lima bean, also known as a butter bean, is mild and nutty with a soft texture once cooked. Its earthy, buttery taste is excellent for soups, casseroles, stews, or any vegetarian savory dish.

If you can’t find lima beans in your local grocery store or you don’t enjoy the taste, then you’ll need a replacement. We’ve pulled together a list of lima bean substitutes. While each option has a unique flavor profile, they won’t be out of place in recipes that call for the original ingredient.

What can I use as a lima beans substitute?

If you need to replace dried lima beans in a recipe, use an everyday dried legume like fava beans, soybeans, or chickpeas. They’re mild, hearty, and easy to find in stores. For allergy sufferers, quinoa is a tasty seed that will replace lima beans in salads or slow-cooked dishes.

Fava beans are flat, green legumes that can be eaten raw or cooked, but you’ll need to remove their clear skin first. Also known as horse or broad beans, they make an excellent alternative to limas, with a similar shape and nutty flavor.

Keep in mind a fava provides punchier flavor with a bitter undertone – it’s also less starchy. If you use them in any dish, you may want to reduce the amount to avoid overwhelming the other ingredients.

Fava beans are versatile in the kitchen, delicious added to salads or baked in a sauce and served as a side. For a bright, fresh springtime dish, make succotash using fava beans. They’ll also replace lima beans in Gigantes plaki, a flavorsome Greek bean dish.

Soybeans will make a handy replacement for limas in your next meal. They are popular with vegans and vegetarians thanks to their versatility and nutritional value.

If you cook soybeans with their skins on, try to skim them off before serving. Their texture is tough and unpleasant.

Tip: If you have leftover soybeans try making soymilk.

Chickpeas, or garbanzo beans, are a lot like limas, in that they don’t have a strong “beany flavor”. They have been used in Mediterranean and Middle Eastern cuisine for hundreds of years.

A benefit of cooking with chickpeas is that they hold their shape extremely well. It is important not to overcook them as you’ll get bitter, unpleasant-tasting food.

If you decide to use chickpeas, keep in mind that you don’t have to stick with the traditional recipes like soups and bean salad. They’re a versatile ingredient, good for roasting, fillings pitas, or pureed into a spicy hummus dip. 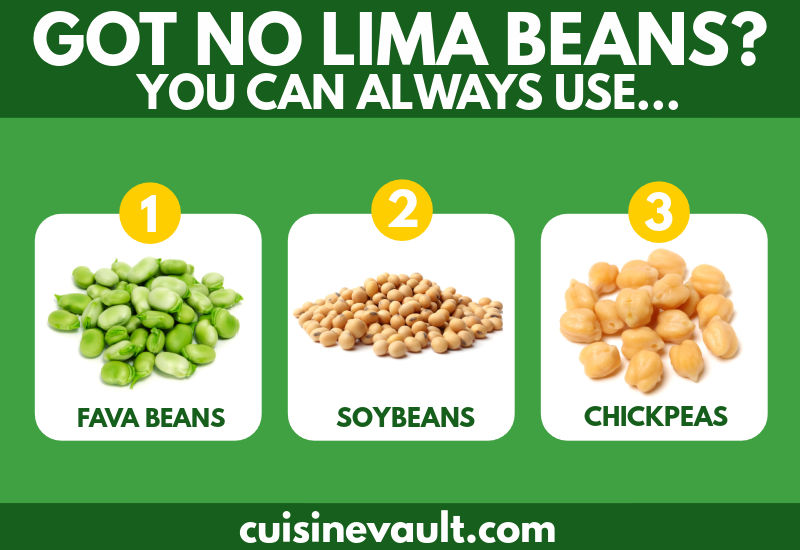 Edamame beans are the fresh, young version of the soybean. They are picked early and are popularly steamed in their pods. If you need to replace limas in a bean salad, then the edamame is a great backup option.

You’ll find edamame beans have a sweet, nutty, pea-like flavor that Japanese cuisine reveres. They have a texture that’s firmer than a pea, but softer and less starchy and grainy than a lima.

Red kidney beans are useful for replacing lima beans if you want more flavor in your dish. These reddish-brown legumes have a nutty flavor with a firm texture, ideal for slow-cooking. They’re excellent added to Brunswick stew, chili beans, soups, and Creole recipes.

Cannellini beans, aka white kidney beans, are a common ingredient that is meaty and earthy. Use them in any recipe that calls for limas. They work in salads, stews, and chili; Italian cooking often uses them in minestrone.

In addition to having a mild taste and tender flesh, they’re popular with those on a plant-based diet. They offer a great source of protein and are high in fiber.

Navy beans are small legumes, also called Boston or haricot beans. If the recipe you’re making is baked beans, these are a delectable choice. Their mild, creamy flavor pairs well with hot spices and tomato sauce.

Navy beans are low in cholesterol and also have high fiber content. Blend them in a processor to create a healthy dip that’s creamy and nutty. You could also try cooking them with mutton, chicken, and vegetables to make a classic Kentucky burgoo – a popular stew served at Derby Day parties.

Quinoa is a seed from the quinoa plant. It may not have a similar taste or texture as lima beans, but it’s a good backup for anyone with legume allergies. Use quinoa in salads or add bulk to your next stew.

For improved flavor: Not everyone enjoys the taste of lima beans and many complain about a chalky texture. Other options like the Navy and red kidney bean tend to be a more popular staple.
Reduce the starch: Limas have a fairly starchy consistency, so alternatives like edamame and faba beans may be a better choice.
Food allergies: People with legume allergies can’t eat lima beans, so an alternative like quinoa will still work in many recipes.

Related reading:
What are some good matzo meal substitutes?
Check out the best ditalini alternatives available.
How can I replace tempeh in cooking?
How do penne and ziti pasta varieties differ?

Can I eat raw lima beans?

Raw lima beans contain linamarin, a compound that turns into hydrogen cyanide once consumed. Although most beans sold in the United States are required to have low levels of linamarin, it is still safer to cook them first and the taste will be greatly improved.

Lima beans are a legume that is rich in protein (12g per one cup serve) and fiber (9 grams). They are low-glycemic making them an excellent menu item for anyone with diabetes. Lima beans are also high in manganese, iron, potassium, and folate.

Do you have to soak frozen lima beans?

Frozen lima beans do not need to be soaked before cooking. They have already been blanched and then flash-frozen, so just simmer in a pot for 12 minutes or as per the packaging instructions.

Do you have to cook canned lima beans?

Canned lima beans have been pre-cooked so they don’t require further cooking. You can rinse them and consume cold or add them to other dishes and heat them before serving. As they’re already cooked, they can be added to a slow-cooked dish late in the cooking time.

Are lima and butter beans the same?

Butter beans and lima beans are the same variety; in some parts of the world like America’s south, the U.K, Australia, and N.Z, they are called butter beans. Other parts of the globe refer to them as lima beans.

Replacing lima beans in a recipe isn’t difficult as any commonly available legumes like fava beans, soybeans, or chickpeas will work fine.

Legume allergy sufferers could try quinoa for a light, nutty ingredient. In stews and soups, bulgur or orzo are tasty additions. To replace fresh lima beans, you can use any fresh bean that’s in season.