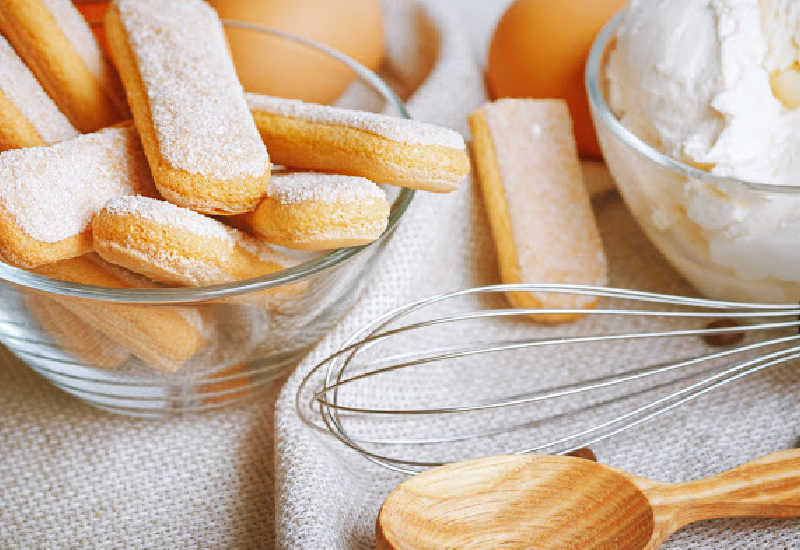 Ladyfingers are sweet sponge biscuits that are shaped like an over-sized finger. Like a genoise sponge cake, these baked treats are made without a leavening agent. Instead, they get their lift from whisked egg whites and the result is a light and airy biscuit that are also a little dry.

The ladyfinger makes a delicious snack served with tea or coffee and is the perfect texture for teething toddlers. But the most popular use for ladyfingers is using them as a key ingredient in Charlotte cake, tiramisu, trifles, and chocolate or fruit gateau. Ladyfingers are usually soaked in coffee, liqueur, or sugar syrup to soften and flavor them before adding the other ingredients.

If you can't get your hands on a packet for your next recipe then you're going to need a suitable ladyfinger substitute. This is an easy ingredient to replace in desserts and to make your life easier we've compiled a list of our favorite options. Keep reading to find the best choice for you.

What can I use to replace ladyfingers?

If you need an alternative to ladyfingers in your next dessert your best options are sponge cake, biscotti, or pound cake. At a pinch, you could use Margherite cookies, Pavesini cookies, or panettone. For authentic ladyfingers your best option is to bake a batch at home; most recipes only use a few ingredients and it won't take long to make them. 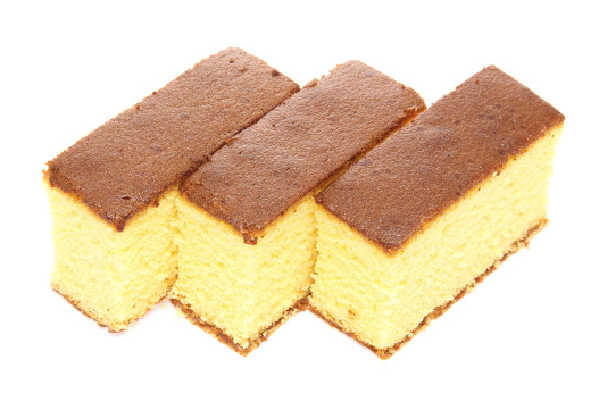 Those cheap sponge cakes sold in the bakery section of the supermarket may look a lot different from a ladyfinger biscuit, but they are made from similar ingredients. To replace one pound of ladyfingers, use one pound of sponge. Before using it in a desert, slice the cake into strips and leave uncovered on a wire rack for several hours or preferably overnight. This will allow the sponge to dry out, making it suitable for absorbing liquid in your next dessert. To speed up the drying process you could also cook the sponge on a very low oven temperature for half an hour or until dry. 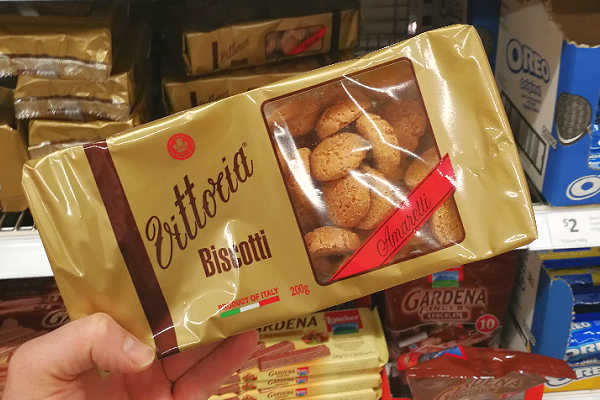 Biscotti, or cantucci, are sweet, crunchy, Italian biscuits that are sold in a wide range of flavors. If you're looking to replace ladyfingers as a snack with your coffee, then these are a closer match than any cakes you can find. However, these biscuits are twice-cooked making them dry in texture and ideal for replacing ladyfingers in tiramisu or trifle. They can be used in similar quantities as the original ingredient. If the recipe calls for dipping them in liquid skip this, and instead give them a good soaking. They must soften up, otherwise, they will be too crispy for your dessert.

You can usually find these cookies in most supermarkets but if you can't find them you may want to try Amaretti biscuits which also work well. 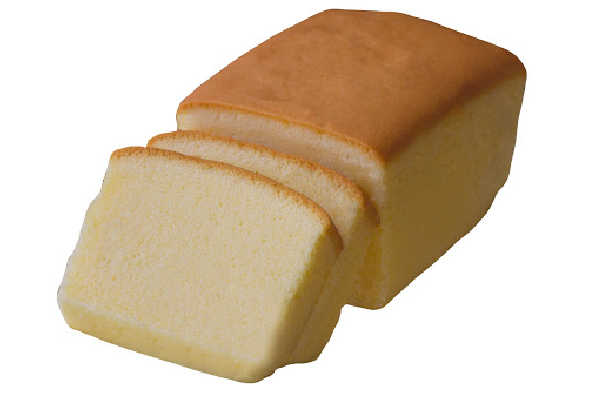 Pound cake is another useful substitute for ladyfingers which is excellent for absorbing liquid and using in a trifle or tiramisu. As with the sponge cake, you'll use the same amount of cake as you would use fingers. Drying the cake out overnight will also help improve the recipe. Even after drying out a pound cake, it will still carry moisture. Instead of dunking the cake in liquid, you may find it easier to brush it initially and then pour more liquid over the cake once it has been added to the dish. If you start dunking the cake into bowls of liquid, it may fall apart on you.

Margherite cookies could easily have appeared first on this list but we have noticed they have become difficult to find in store. If you manage to get your hands on a pack or you have some sitting in the pantry at home, then use these as your best option for tiramisu. They have a similarly sweet, mild vanilla taste and also have a similar shape.

Unless you live in Italy or have an Italian grocer nearby Pavesini cookies may be difficult to find. They're a variation of the Italian savoiardi (ladyfingers), although flatter and less airy. Like the other options on this list, they will benefit from leaving out overnight to dry. The texture may differ from ladyfingers when removed from the packet but once added to a moist dessert and left overnight, the difference will be barely noticeable.

The Italian holiday bread, or panettone, is a delicious soft flaky type of sweet bread. If this substitute sounds far removed from ladyfingers, then you'd be right. However, it is still possible to put this cakey bread to use in moisture-laden desserts. Simply pre-cut suitably sized pieces and bake on a very low heat until it feels dry. Panettone also makes a delicious snack so you could replace ladyfingers as an afternoon treat. 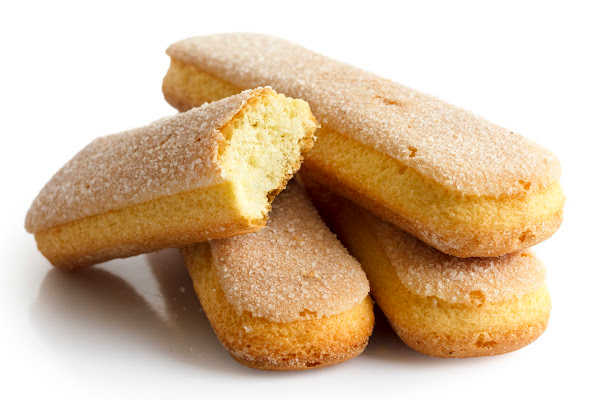 Follow this recipe to make fresh homemade ladyfingers that are delicious eaten on their own or added to your favorite dessert. 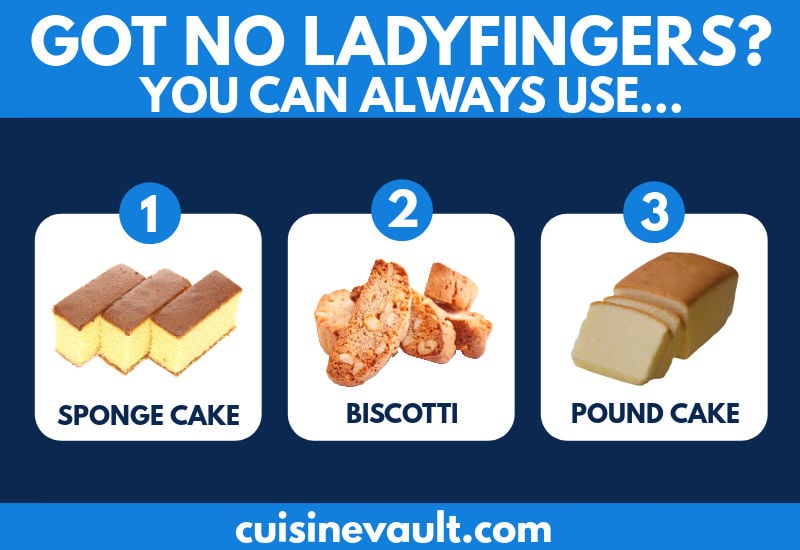 Although Italy is a major producer of ladyfingers, the recipe originated at the court of Duchy of Savoy in the 15th century. A visit from The French King inspired the creation and they were later named Savoiardi, the official court biscuit.

Are Vienna fingers the same as Lady Fingers?

Are ladyfingers supposed to be soft?

Authentic Italian made ladyfingers have a soft texture that is crispy and dry, but they are easy to bite into. The local version of ladyfingers made in the United States is smaller, softer, moister, and more cake-like. Either option can be used for soaking up coffee or liqueur in tiramisu and other similar desserts. However, the U.S. version of the biscuit will benefit from brief baking at a low temperature to reduce the moisture content.

What is another name for ladyfingers? 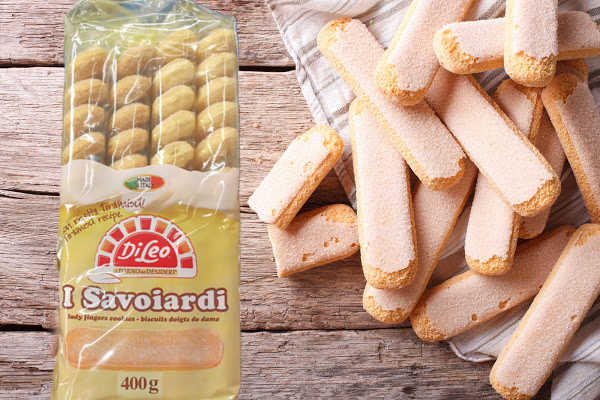 Although ladyfingers are a delicious biscuit for dipping into hot drinks, they are also commonly used as a key ingredient in desserts like tiramisu. If you don't have any in the cupboard then you can replace them with sponge cake, biscotti, or pound cake. In a pinch, you could use Margherite cookies (if you can find them), Pavesini cookies, or panettone. If time permits, the most authentic option is to make your own ladyfingers at home - they are easy to make with a handful of common ingredients.

Finally, for those on a gluten-free diet, you may be pleased to know that there are gluten-free ladyfingers now being sold in supermarkets and online. No one needs to miss out on delicious Italian desserts!

What is your favorite Italian dessert? Please let us know in the comments below.