When trying to follow a low-acid, stomach-friendly diet, there are a lot of things to consider. For one, you have to make sure that you're consuming enough of all macronutrients — carbohydrates, fats, and most importantly, protein. 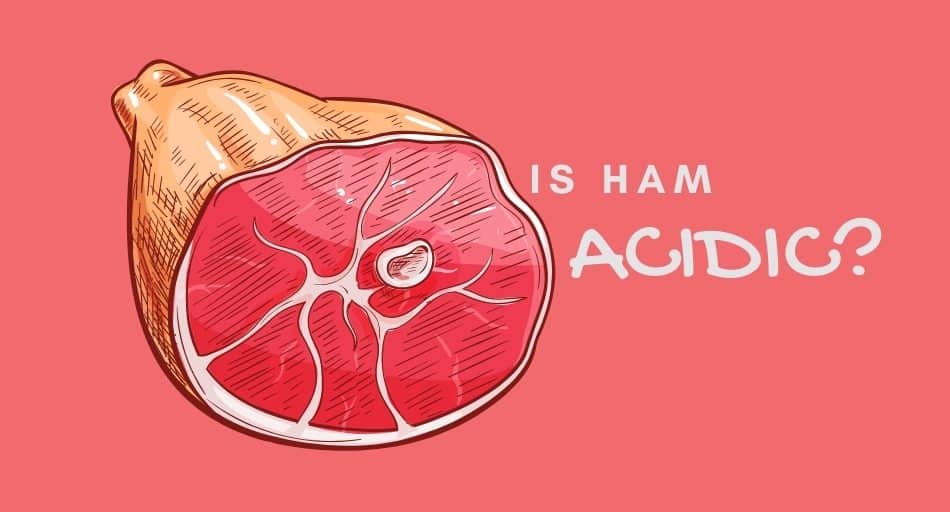 As a result, you have to know the pH levels of various protein sources and the effect they have on your body. That way, you can stay healthy and strong without experiencing any unpleasant symptoms. So, let's start with some of the most common ones: Is ham acidic?

Ham doesn't have a very low pH level, but it doesn't mean that it's not acid-forming. In fact, most processed and cured meats have an acidic effect on your body, which means that they can worsen the symptoms of acid reflux and GERD. This is because the process of curing and smoking meats includes adding a lot of preservatives, such as sugar, sodium, and other acidic minerals.

What is the pH level of ham?

Ham has a pH level of around 5.90-6.10. Even though it doesn't sound like it's low, what is more important is how the foods act after being digested and metabolized. In the case of ham, it has an acidic effect on your body due to a high sodium, sugar content along with other acid-forming substances that were created during the curing process.

As a result, consuming too much ham regularly can make your symptoms of acid reflux worse.

On top of that, different versions of ham may have different pH levels, but their acid-forming properties will remain the same. This is because it doesn't have much to do with the type of meat they're made with, but instead, the curing and smoking process.

Unfortunately, this process often adds many substances to the meat that harm your digestive system, which can be particularly dangerous for people who already have problems with digestion or acid reflux.

Is ham good for you?

Ham is a great source of lean protein; in around one serving of five slices, it contains 91 calories and around 9 grams of protein. This macronutrient helps you stay full and satisfied after a meal. It also doesn't slow down digestion, and instead, it boosts your immune system and feeds your muscles, preventing them from becoming an energy source.

Ham is often sold from leaner pork, so the fat value can be even lower than in roasted pork. Hence, it can be a great food to load up on essential proteins without stuffing yourself with unnecessary fat.

On top of that, ham is also high in selenium. This mineral is a powerful antioxidant that helps your body fight oxidative stress and damage to your cells that may lead to chronic conditions, such as heart disease and cancer.

In fact, selenium can reduce your risk of thyroid dysfunction and prevent mental decline, both due to age and serious conditions. Ham is a great source of this mineral, so it's a great idea to include it in your diet, especially if ham doesn't aggravate your acid reflux or GERD symptoms.

One serving of ham is also a perfect source of thiamin. Often called vitamin B1, thiamin helps your body's cells transform carbohydrates into energy levels, providing you with leveled energy throughout the day. It also contributes to the health of your brain and nervous systems as well as plays a role in muscle contraction and conducting signals from the brain to nerve and muscle cells.

As a result, it's essential to include good amounts of this micronutrient in your diet.

Furthermore, ham is considered to be a very low-calorie dense food according to a caloric density scale. This means that it can replace high-calorie, fatty meats and protein sources on a weight loss diet. As a result, it not only helps you feel full, thus preventing overeating, but the compounds it contains help your body metabolize fat quicker and more efficiently.

Hence, even though it might be acid-forming, it can contribute to gut health if you're not too prone to heartburn.

Is ham bad for acid reflux?

Depending on the method of preparation, ham can be a suitable addition to a diet low-acid — provided it's consumed in moderation. This is because it's rich in many nutrients that prevent inflammation in your stomach and esophagus.

The same nutrients also keep you healthy, making them an integral part of any healthy, balanced diet. Furthermore, it's low in carbohydrates but high in protein, helping you feel full and not forcing your stomach to produce excess stomach acid.

On the other hand, it's important to remember that every type of meat that's been processed, cured, or smoked contains a lot of sugar, sodium, and other byproducts that inflame your stomach. So even despite the anti-inflammatory compounds that ham contains, ham may still irritate your stomach, leading to acid reflux.

In addition, consuming ham, as well as other types of meats that often get reheated, increases your risk of contracting foodborne diseases. This can cause indigestion, constipation, diarrhea, and many other digestive systems issues.

As a result, people particularly prone to these problems should avoid the types of food that pose the biggest risk, and that includes pregnant women, people with digestive diseases, young children, and older adults.

Ham is a type of meat that's been cured or smoked, thus it has acid-forming properties. As a result, it might not be the best choice for people struggling with acid reflux or GERD symptoms.

On the other hand, if your digestive system can tolerate ham, it might be a good idea to have some have every once in a while as it contains many essential nutrients and minerals that contribute to maintaining a healthy, balanced diet.