Finding low-acid foods may seem daunting, especially when you're just starting your journey to consuming a primarily alkaline diet. However, with some research, you can not only improve your health but also reduce the severity and frequency of acid reflux symptoms. 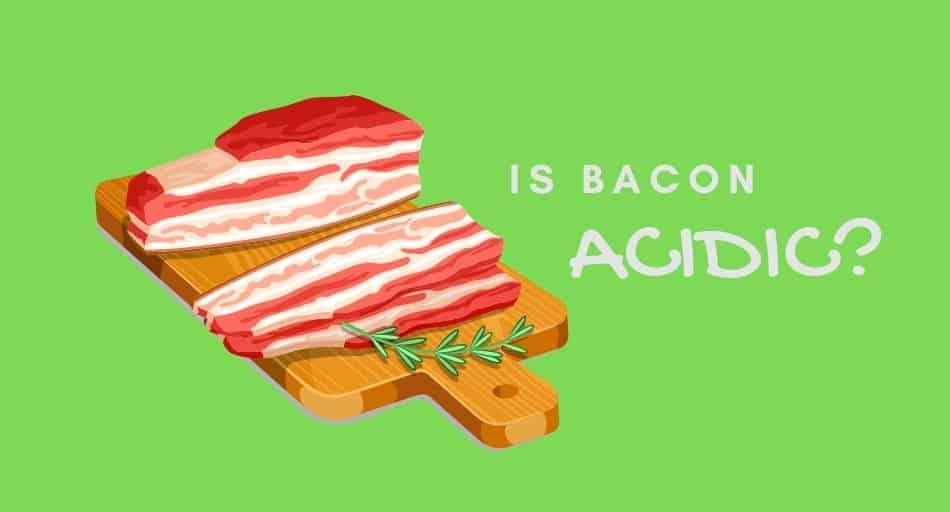 To do that, you need to familiarize yourself with the pH levels and the effect that certain foods have on your body. This also includes meat since it's a good source of essential protein. For example, is bacon acidic?

Bacon has a relatively high pH level, but once it's digested in your stomach, it becomes acidic. Because of that, people who are particularly susceptible to acid reflux or GERD flareups should stay clear from bacon as much as possible.

On the other hand, bacon is still a tasty treat, so if you can tolerate some acidic foods, especially those high in fat, you don't have to eliminate this food from your diet completely.

What is the pH level of bacon?

The pH level of bacon varies between 5.20 to 6.12. However, once it's metabolized, bacon is acid-forming; thus, it has a rather acidic effect on your body. This means that if you consume bacon regularly and in large quantities, you may worsen your acid reflux and GERD symptoms.

Furthermore, bacon becomes more acidic, and it irritates your stomach more when you cook it for longer. This is because overcooked meats produce compounds and substances that are harmful to your stomach and esophagus, leading to inflammation.

This, in turn, can result in an increase in your acid reflux and GERD symptoms.

Is bacon good for you?

Bacon is a caloric food, containing around 123 calories in just three slices. This means that excessive consumption of bacon can cause weight gain, which leads to other health conditions.

Bacon also has a very high-fat content. In fact, a lot of the fat in bacon comes from saturated fats, including high amounts of cholesterol, which means that it's not very healthy for your cardiovascular system.

In the past, scientists and doctors used to believe that high consumption of saturated fats leads to an increased risk of heart attacks, but now, the research doesn't find any concrete link.

Three slices of bacon contain 564mg of sodium. A healthy adult should consume less than 2300mg per day. With that, you have to keep in mind that almost all food products contain sodium, so getting too much from bacon can lead to health problems.

Having too much sodium in your diet can cause an increased risk of a stroke, so if you already have a genetic or dietary risk, it's best to stay away from bacon altogether.

Furthermore, bacon contains trace amounts of vitamins and minerals, so it's not enough to fulfill your daily nutrient needs. All of these micronutrients are necessary to ensure that your organs function properly. Without them, you're at a higher risk of a lot of health conditions.

As a result, the majority of your diet should be filled with nutrient-dense foods as opposed to calorie-dense products. You can still consume bacon, but it's best to be done as a treat every once in a while.

Turkey bacon is a leaner alternative for bacon, often eaten by people who are following a weight loss plan. This is a better idea since three slices of turkey bacon contain around 98 calories, which is lower than traditional pork bacon.

The fat and protein content remains relatively the same, but turkey contains less saturated fats that can increase your 'bad' cholesterol levels. Because of that, turkey bacon can also be less likely to cause acid reflux and heartburn since it doesn't slow down digestion as much as pork bacon does.

Turkey bacon is also a good source of phosphorus. This mineral plays an important role in how your body utilizes carbs and fats, thus helping to turn them into energy that's then stored in your muscles and other cells.

On top of that, phosphorus works with vitamin C in order to keep your immune system working effectively and contribute to the growth of red blood cells.

Can you eat bacon with acid reflux?

In general, bacon is high in a couple of nutrients that worsen the symptoms and severity of your acid reflux. Firstly, it's very high in fat. This is problematic because fat slows down digestion, forcing your stomach acid to leak up your esophagus, causing heartburn.

Excessive consumption of foods high in fat can cause weight gain and other health complications such as type 2 diabetes, high cholesterol levels, and a higher risk of a heart attack and stroke. Hence, it's best to limit how much bacon and other fatty meats you consume to avoid these.

Another reason why bacon might not be good for people struggling with acid reflux is its high sodium content. This mineral is necessary for proper bodily function, but bacon contains way too much for just one portion.

A regular increased intake of sodium can lead to water retention, which negatively impacts digestion and the effect of stomach acid. Not to mention, sodium is one of the culprits behind an increased risk of stroke in people who don't consume a healthy, balanced diet.

Bacon is an acid-forming type of meat that's also high in fat and sodium, which doesn't make it particularly good for people struggling with acid reflux and GERD symptoms. On the other hand, it does contain some essential nutrients, but you're better off getting them from fresh pork.

Nevertheless, it's important to remember that if your digestive system tolerates small amounts of acidic foods, you can enjoy some back every once in a while. After all, following a low-acid diet doesn't mean that you have to give up all the foods you enjoy.