If you love bacon but are tired of the mess that you make every time you cook it, try making it in an Instant Pot cooker. It is one of my favorite ways to do it because it is almost hassle-free, and the cleanup is as easy as it gets.

Almost everyone likes their bacon crispy and chewy. When cooking bacon in an Instant Pot, you get precisely what you want: super crispy and insanely delicious cooked bacon that can be served for breakfast or even as a quick snack.

With an Instant Pot, you'll be able to cook the bacon in less than 10 minutes, which is awesome timing. And since this method makes no messy splatters over the stovetop, the only thing that you'll need to clean is the bowl from the Instant Pot (and it's really quick and easy to do!).

Why Cook Bacon In Instant Pot

Truth be told, I'm obsessed with cooking bacon in an Instant Pot cooker. Some say that frying it in a skillet is easier, but they don't take into account the amount of time they spend cleaning up after such cooking.

Since bacon produces lots of fatty bacon grease when it heats up, it may get scattered around your stovetop. And this can turn your kitchen into something impossibly greasy and messy. Of course, you can also cook the bacon in your oven. But it will do the same thing to it.

So if you want to avoid spending endless time cleaning your kitchen from the mess, you can just use an Instant Pot for cooking the bacon. It's way easier to clean and makes no mess around your kitchen. The only thing that you need to wash is the bowl from your Instant Pot. And if you do it while it's still hot, you'll have no issues with it at all.

Can You Cook Frozen Bacon In Instant Pot

YES, of course. You can definitely cook frozen bacon in your Instant Pot. But there is one thing that you must remember—it will take a little bit more time to cook until the desired crispiness.

When I have frozen bacon, I usually just thaw it before cooking or use the microwave to thaw it and only then cook it. This way, you'll get that perfectly crispy bacon quicker.

There are many Instant Pot recipes, but this is one of my favorites. To make it, you'll need only two ingredients: bacon and cooking oil spray (or just some oil). You can use any type of bacon: both turkey bacon and pork bacon are fine.

If you don't want to add any oil at all, you can. But there is a tiny chance that you won't be able to flip the bacon over to its other side, so it's better to add a splash of oil or just spray for a few seconds.

You'll also need something that will help you flip the bacon over to its other side and remove it later from the Instant Pot. I prefer to use a spatula for this. But if you have metal tongs, you can also use them.

And, of course, you'll need an Instant Pot cooker. If you don't own one yet. I strongly recommend you get it. You can't even imagine how many amazing recipes you can make with it—both keto and non-keto ones.

How to Cook Instant Pot Bacon

You'll be amazed at how easy it is to cook Instant Pot bacon. You must try it at least once. And trust me, you'll never want to cook your bacon any other way again.

So, to cook Instant Pot bacon, the first thing that you need to do is to plug in your Instant Pot cooker. Then press the Saute mode and set the timer for 30 minutes.

Let your Instant Pot heat for a few minutes (this is important!), then spray it with some cooking oil.

Cook the bacon for 3 to 5 minutes on one side, then turn it over and cook for a few more minutes. When you see that the bacon has developed the desired crispiness, take it out of the Instant Pot.

When you're done cooking the bacon, turn off the Instant Pot and unplug it.

The best way to store bacon is in a plastic bag in the refrigerator. This way, the bacon will last up to 5 days. Then, whenever you want to, you can just reheat it in the microwave or fry it for a minute or two in an Air Fryer to develop the crispiness. 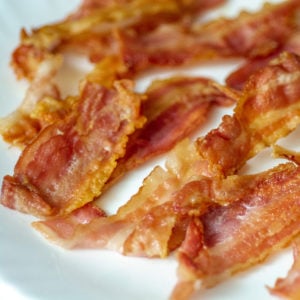 If you love bacon but are tired of the mess that you make every time you cook it, try making it in an Instant Pot cooker. It's almost hassle-free, and the cleanup is as easy as it gets.
5 from 3 votes
Print Recipe Pin Recipe
Prep Time 0 mins
Cook Time 10 mins
Total Time 10 mins
Course Breakfast
Cuisine American
Servings 4
Calories 29 kcal