From the people who gave us the Magic Bullet and the NutriBullet range comes the Veggie Bullet. In a world where “zoodles” and cauliflower rice are as trendy as anything, the Veggie Bullet seems to be a very valid appliance indeed.

It shreds, slices, chops, and spiralizes with various blades and a 500-watt motor. There are certainly some great features and uses, but there are also some issues to be aware of too.

Is the Veggie Bullet really worth the money and space? Is it easy to use? Is it too fiddly? What are the most common reasons for the low review scores?

====>> In a rush? Click here to see the current price for a Veggie Bullet Spiralizer & Food Processor on Amazon

What’s Interesting About the Veggie Bullet?

The most interesting thing about the Veggie Bullet is that it's designed and intended for slicing, chopping, and processing veggies and cheeses for meal prepping purposes. 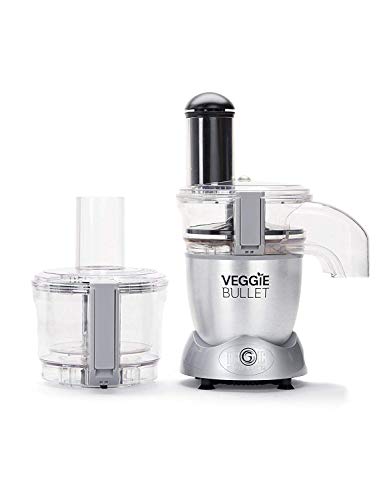 This is opposed to other blenders and processors which are intended for blending and blitzing smoothies, drinks, other pourable creations as well as chopping the odd veggie.

It's definitely a machine for people who have a very specific need for preparing veggies quickly and in great quantity. Otherwise, you'd just use a chopping board and a knife, surely?

What Do Other Customers and Reviews Say?

The review section doesn’t paint a particularly great picture of the Veggie Bullet. There is a higher proportion of negative reviews than we typically see blenders (spiralizer or not).

What did customers find so wonderful, and what did others find so terrible?

Encourages more veggie eating: many customers who were happy with the overall performance of the Veggie Bullet commented that their daily veggie intake increased greatly, helping with specific weight and diet plans.

Great for spiralizing: the spiralizing feature is definitely very popular among happy customers and positive reviewers. They have found that spiralizing carrots, zucchinis, and other veggies is easy and produces a great result.

Too many parts/bulky: a popular comment in the negative review sections is that there are too many parts, making assembly and clean-up too cumbersome. With this comment, the bulkiness of the Veggie Bullet also comes under fire. Some customers have found that it’s too clunky and large, making storage a bit of a nuisance.

Can You Make Fries With the Veggie Bullet?

Yes, there is a blade for the special purpose of making shoestring fries. The Veggie Bullet Shoestring 5mm Fry Blade Slicer has been designed to chop potatoes and sweet potatoes into fries. The fry blade doesn’t come with the Veggie Bullet set, you have to purchase it separately.

What Do You Get With It?

In the box, you will receive:

What are the Technical Specifications?

How Do You Use It?

How Do You Clean It?

According to many negative reviews, the Veggie Bullet is not so great when it comes to clean up. Lots of customers have mentioned that there are far too many parts to wash, even after a short prep session. It does seem a little cumbersome when you consider that there are bowls, lids, chutes, and blades to clean. This is common for most food processors, so it’s not necessarily a specific Veggie Bullet fault.

The parts are all dishwasher safe, as long as they go in the top rack. The manual recommends that each blade and part should be rinsed and gently scrubbed after each use, to make sure nothing dries or sticks.

How Does it Compare to Other Models?

The Kitchenaid is more expensive, but it is more of a multi-tasker with a dough hook and regular food processor blades, as well as disks.

If you’ve got a Kitchenaid stand mixer, then yes, I would definitely get the spiralizer attachment, it works well and has lots of handy functions.

The Ninja has more versatile features, with everything a food processor offers, as well as a dedicated spiralizer. In my opinion, the Ninja is a little more attractive to look at and seems more compact.

Veggie Bullet Vs Vitamix A2300 Ascent

Well, they are very different. If you are in need of a new blender and you have a big budget, then a Vitamix blender is a very fine choice. Otherwise, I would stick to your current blender and settle for a knife and chopping board for your fresh veggie chopping needs.

Are There Other Replacement Parts or Accessories?

Yes, you can buy all of the replacement blades on Amazon, including:

You can also get the Veggie Bullet 4-piece replacement blender cup, blade, and lid on Amazon. It’s a little bullet cup with a bullet blade so you can blitz sauces and dips with your Veggie Bullet base.

Verdict: Is This Food Processor/blender for You?

To be perfectly honest with you, I would say that the Veggie Bullet is well-meaning, but not a necessity in your kitchen. Unless you are constantly spiralizing, grating, and slicing large amounts of veggies and you don’t mind a cumbersome clean-up process, then sure, consider it. However, I would say that your regular food processor can do most of what the Veggie Bullet can do if it comes with various blades.

You can also find smaller, more affordable spiralizers on the market if you’re a zoodle fanatic. It just seems a little too fiddly to me, especially when you can slice through a pretty decent volume of veggies with a good old knife and chopping board if you lend an extra couple of minutes to the meal prep time allocation.

Click Here to See the Veggie Bullet on Amazon