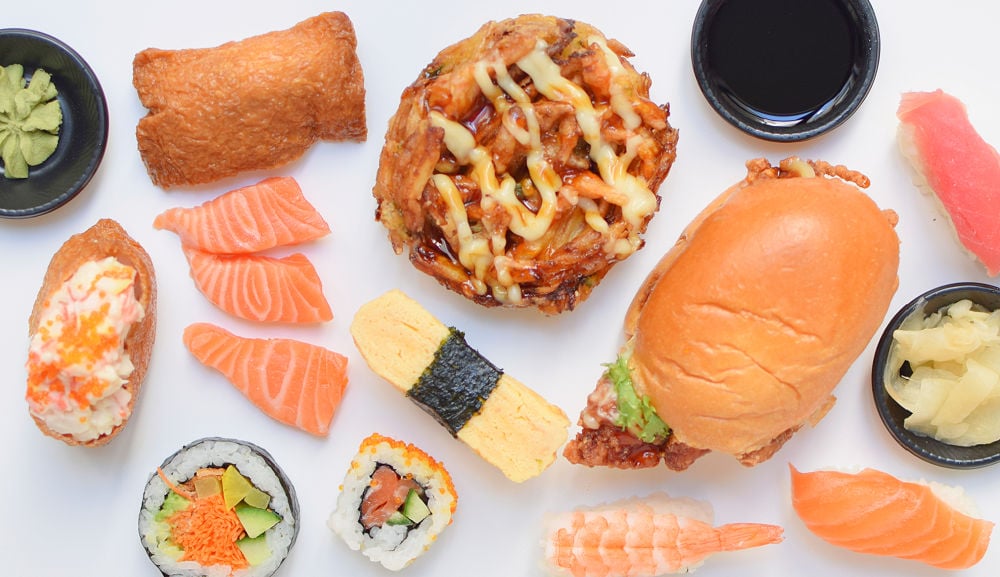 Sushi started as a way for the people of Southeast Asia to preserve their fish in rice. Over the centuries, the Japanese have turned sushi making into an art form, experimenting with new flavors and types.

Recently, countries like America have introduced more sushi varieties to suit local tastes. If you’d like the rundown on the most popular types of sushi, then keep reading. We’ve created the essential list of different types of sushi that you need to try at least once in your life.

What are the common types of sushi?

There is a huge range of sushi that can be served up at Japanese restaurants or made at home. Nigiri, inari, sashimi, and maki rolls are all popular varieties, eaten around the world. 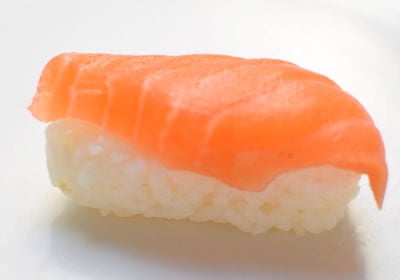 Nigiri takes a rectangular clump of rice and places a single ingredient like fish or egg on top. It may seem a simple menu item but cooking the rice correctly can take sushi chefs years to perfect. Also, getting the right balance of rice and topping is a challenging task.

Tuna nigiri is the most popular type of sushi in Japan according to Japan Guide, but there are many more options if you don’t enjoy raw tuna. Salmon is a popular option in the United States, along with shrimp and egg. Some high-end restaurants also top nigiri with lesser-known seafood like caviar, abalone, geoduck, or sea urchin.

Nigiri is usually served with wasabi, pickled ginger, and soy sauce. You can eat it with chopsticks, but fingers are more effective. 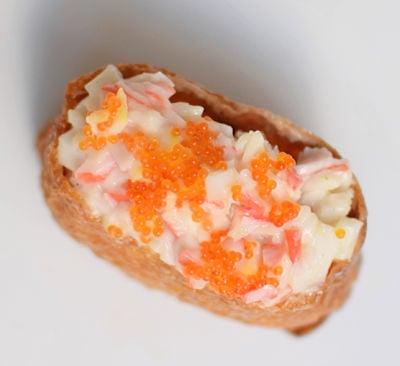 Inari takes rice and stuffs it into a pouch made of tofu. It’s not your average tofu though. It’s deep-fried then slowly simmered in a dashi broth. The result is a tofu skin that’s soft and sweet. It's sushi that's great for fussy eaters.

Although the most common type of inari is rice and tofu, other ingredients can be placed on top of the rice like caviar or shiso. 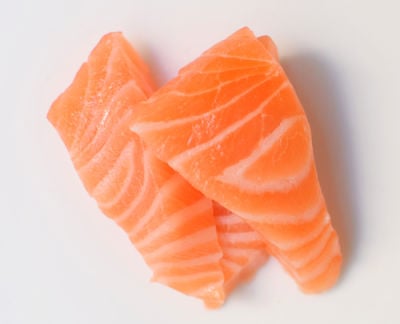 The simplest type of sushi you can eat has to be sashimi, rectangular slices of fish like tuna or salmon served without rice or other ingredients. It may sound simple, but fresh, tender fish is rich, flavorsome, and hard to beat when dipped in soy sauce. 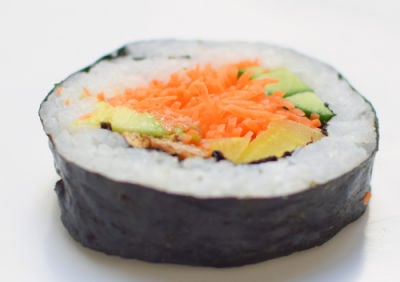 Usually, when we think of sushi, maki rolls are front of mind. Also known as makizushi, these rolls come in a wide range of styles but often combine sushi rice, nori (seaweed sheet), and various fillings. Check out our step-by-step guide on making sushi rolls to create these delicious and healthy morsels in your own kitchen.

Some popular maki styles include:

Hosomaki: these sushi rolls are small, containing only one filling like tuna, carrots, or cucumber. They are usually wrapped in a sheet of nori.

Futomaki: a much larger sushi roll that contains several fillings. These are more commonly sold at sushi bars rather than upscale restaurants.

Temaki: also known as the hand roll, this sushi takes a sheet of nori and rolls it into a cone shape. It’s then filled with ingredients like fish, rice, and vegetables. Almost any ingredient can be added so they’re great for using up leftovers in the fridge.

Gunkanmaki: Boat-shaped nore gets vinegared rice that get topped with roe, tuna, sea urchin, meat, egg, or vegetables. The rice and toppings are housed in a nori casing. 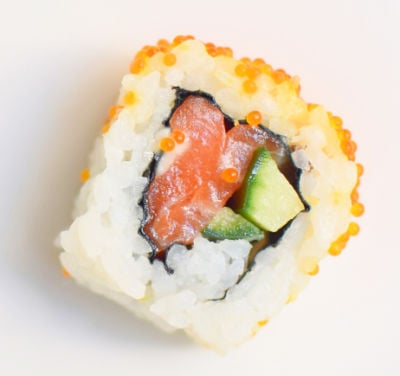 For those that want a break from seaweed-wrapped sushi rolls, the uramaki is a great option. Also known as the inside-out roll, it’s got rice on the outside which surrounds fillings inside.

Uramaki is a relatively new type of sushi, believed to have been invented in the 1960s. This is around the time the California roll was developed in the United States.

The dragon roll is made to look like a dragon and is especially popular as a festive dish. It is an inside-out roll that includes shrimp tempura, eel, and cucumber. Slices of avocado are creatively positioned to look like dragon scales.

Hugely popular around the world, the California roll consists of cucumber, avocado, and imitation crab meat. Its mild flavor is a good menu choice, even for the pickiest eater.
Unlike most rolls that have a seaweed outer layer, it usually has a rice cover instead. In some parts of the world, California rolls also have a variety that uses nori as the wrap.

A spider roll included a crispy element that makes it a very popular variety of sushi. It included soft shell crab tempura, cucumber, carrot, mayo, and avocado. This roll gets its name from the crab legs which stick out the top and look like spider legs.

A rainbow roll is similar to the California roll, in that it does away with the nori outer. These rolls roll up crab, cucumber, and avocado in rice. Each slice of roll is then topped with colorful ingredients like salmon, tuna, and avocado.

The authentic way to make a spicy tuna roll is to use spiced raw tuna. But a more popular option in the United States and many other countries outside Japan is to use cooked tuna. The fish is mixed with a mayonnaise that incorporates Ichimi Togarashi which may include ginger, chili pepper, and sesame seeds. 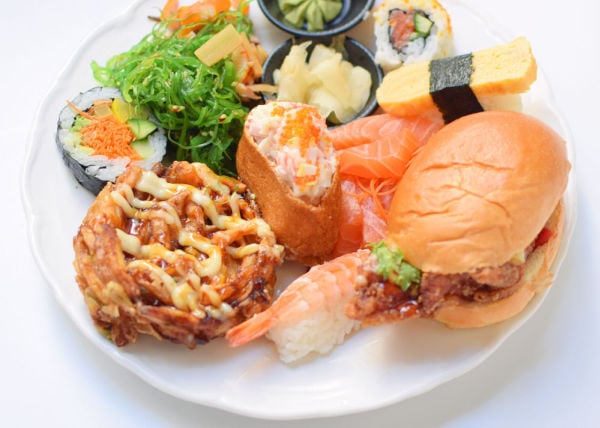 The shrimp tempura roll is an inside-out roll that is filled with shrimp tempura, avocado, and cucumber. They are often garnished with tobiko (fish eggs), bonito flakes, or sesame seeds. Eel sauce is another popular extra that is savory and sweet. You can also take a look at our handy list of unagi sauce alternatives.

If you enjoy cooked King crab combined with mayonnaise, then you’ll love the King crab sushi roll. It is an uramaki style roll and is popular with people who don’t enjoy raw fish.

The Boston roll is a maki roll that has a thin layer of rice and poached shrimp as the protein filling. Like many sushi rolls, avocado, cucumber, and lettuce are added for color and texture. Fish roe is usually added as a garnish.

An Alaska roll will often contain crab meat, salmon, avocado, cucumber. The crab is used as a filling while the salmon is placed on top as a garnish.

The Philly roll, or Philadelphia roll, is filled with smoked salmon, cream cheese, avocado, and cucumber. It was invented in the 1980s by Madame Saito at her sushi restaurant in Reading Terminal, Philadelphia. Source.

People on a plant-based diet will enjoy a simple cucumber roll. This roll may also include a pickle or spicy mayonnaise. For extra flavor, dip these rolls in soy sauce and add a little wasabi for a burst of heat.

Hakozushi is a special type of sushi made in Japan that uses a wooden press to make perfect square-shaped pieces. Each piece has a different topping, creating a mouth-watering pattern. Hakozushi is sold in wooden boxes and is often bought as a gift.

Chirashizushi takes the ingredients commonly used to make sushi rolls and serves them separately in a bowl. It is an impressive-looking dish with plenty of color. In Japan, Chirazushi is often served for special occasions like Girl’s Day (Hinamatsuri). 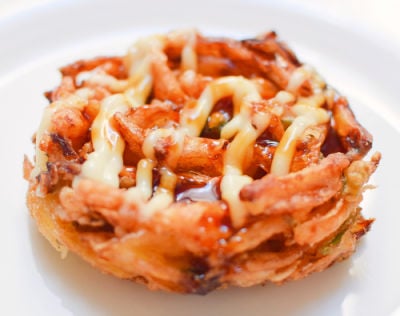 Although not a type of sushi, okonomiyaki is almost always a menu item in sushi bars. This is a savory Japanese pancake that is topped with Kewpie mayo and eel sauce (or similar sweet-savory sauces). For anyone who doesn’t like fish, this is a good alternative. 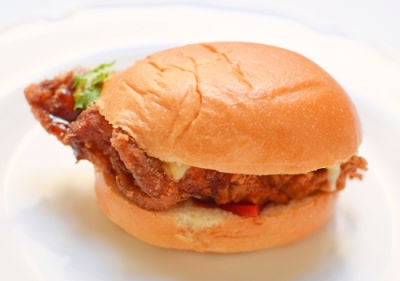 Another popular offering at sushi restaurants is the tempura pork bun. Crispy-coated pork is wedged in between a soft white bun, along with lettuce and sauce. It’s a perfect case of East meets West, with traditional tempura cooking used to make a type of American burger.

Related reading:
The ultimate comparison of nori and soy paper.
How to reheat sushi the right way.
Find out if freezing sushi is a good thing.
Discover what the best dishes are to serve with sushi.

There are hundreds of options when it comes to sushi. This is part of the reason this cuisine is so popular all over the world. Nigiri, inari, sashimi, and maki rolls, and inside-out rolls are the most popular types of sushi making up the bulk of menu items in any sushi bar.

We've created the following infographic which sums everything up in one picture. Feel free to share it and use it on your own pages (with credit).