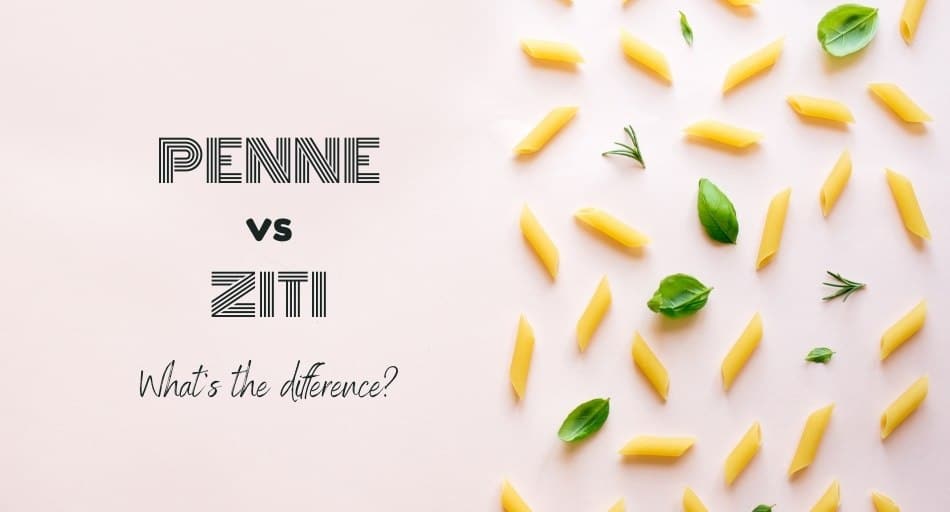 When comparing penne vs. ziti, you might wonder why someone bothered to make these two varieties different at all - would not one of them, either penne or ziti, be enough? What could either of them possibly do that the other can't?

In fact, each of the more than 350 officially recognized pasta shapes has evolved with a specific purpose in mind. Even though the differences are often very small and nuanced, each shape connects with its accompanying sauce in a subtly different way.

What's the difference between Penne and Ziti?

The physical distinctions between penne and ziti are their cut and texture. Penne is the shorter one and is cut at sharp angles. Ziti is cut at square angles so that its tube shape is emphasized. When ziti is cooked, it turns smooth and buttery, whereas penne remains quite rigid.

Penne is cut at sharp angles, like a quill, and indeed the name "penne" comes from the Italian word for quill - you can also see the similarities to the English "pen"! While there are smooth varieties of penne (penne lisce), the more common form is penne rigate, the ridged variety that is better at soaking up the sauce.

Penne is very versatile and works well with a variety of thick sauces. Due to its sturdy texture, which pairs well with freshly shaved cheese, it is also a favorite to be used in pasta salad.

On the other hand, Ziti is a shape of pasta you would hardly find in a pasta salad since it is much too fragile for that. It is excellent when served baked, drowning in melted cheese. The name "ziti" comes from the Italian word for bridegroom or betrothed since it is traditionally served as the first course of a wedding lunch.

Are Pasta and Noodles the Same?

For a long time, I thought that pasta was just a fancy way of saying noodles - used only by pretentious people who also tend to order two espressi instead of two espressos, no matter whether they are in Italy or not. Just looking at the shelves in the supermarket more attentively quickly makes apparent that this is not true, though.

"Pasta" is what is written on the boxes of Italian pasta that comes in all shapes and sizes, whereas "noodles" largely come in two shapes: round nests or the wavy blocks in which Ramen noodles are often sold.

RELATED: Is Pasta Acidic? (How Healthy is it Really?)

Since they cook faster than pasta, noodles are also found more commonly in ready-to-eat cups that only have to be heated in the microwave for a few minutes.

Noodles are a much older dish than pasta. The oldest example that has been uncovered is a 4,000-year-old bowl of noodles that archaeologists have found on the Lajia archaeological site in northwestern China. Those noodles were made from millet, a grain that is indigenous to China.

It is unclear how and when noodles were introduced to Italy, where they were transformed into pasta. A common belief is that Marco Polo brought them to Italy in the 13th century. Still, since Marco Polo's books are not the earliest sources to mention pasta in Italy, this is unlikely. A more probable theory is that Arab nomads brought pasta to the west.

It's in the Flour

What often differentiates noodles from pasta is the flour from which they are made. Noodles are nowadays made from wheat flour, whereas traditional, high-quality pasta is made from durum flour.

Since wheat is softer than durum, this gives noodles a more delicate, lighter texture and color, too, which makes them quicker to cook.

An even more significant difference is how they are made. Pasta is often extruded - pressed through holes in a machine like you squeeze toothpaste out of a tube. Noodles, on the other hand, are prepared with the roll-and-cut method.

RELATED: Is Bread Acidic? (How Bad Is It)

This process starts by adding salt water to the dough - the salt content is important to bind the dough together. It also makes sure that the noodles stay fresh during the natural drying process.

Then, the dough passes through a series of rollers that make sheets of various thicknesses. The last of these rollers have a cutter attached to it which slices the dough into long, ribbon-like strands.

Salt is necessary for the production process of noodles, but pasta is often produced salt-free. This is why water has to be salted for cooking pasta, whereas noodles can be cooked in unsalted water - mostly, though, they cooked directly in a soup.

Which pasta is the most popular?

The most popular pasta in the world of all the pasta types is spaghetti, and it is one of the most frequently cooked pasta worldwide. Pasta, in general, is the most consumed food in the world and everyone's favorite. After Italy, Venezuela is the largest pasta consumer. Americans' top one pasta is spaghetti as well. Spaghetti is easy to cook, easy to store, and not expensive.

What pasta do Italians eat the most?

Surprisingly the most popular pasta in Italy is not spaghetti. Numbers are saying that Italians eat penne the most.
Penne is most often served with meat or tomato-based sauces. You can use penne pasta in baked pasta dishes and pasta salads too. One of the most well-known penne pasta recipes is 'arrabbiata,' which comes from Rome. The word ‘arrabbiata’ means angry and refers to the fact that the sauce can make your face turn red as it's served with spicy tomato sauce. Penne pasta can be used as a substitute for other shapes of pasta, for example, ziti.

Penne is quill-shaped pasta, and it has a very precise origin. It was born in 1865, with a new device patented by Giovanni Battista Capurro in the small town of San Martino d'Albero, near Genoa. This device was able to cut pasta diagonally without breaking it, which was progress in pasta making as the pasta was cut by hand before that, making it easier and faster.