Mizithra is a Greek cheese that is made from sheep’s milk and varies in texture depending on its age. The fresh product is mild, sweet, and slightly tart with a soft texture like cream cheese. A matured block is hard, dry, and crumbly, perfect for grating.

Fresh mizithra is excellent for adding to baked desserts, cheese pastries, pies, and Greek cheesecake. The mature version is better grated or shredded into soups, pasta dishes, and sauces.

Finding mizithra outside of Greece can be a challenge and even if you do spot it at a specialty cheese store, it can be quite expensive. Instead, you may want to try one of our mizithra cheese substitutes which are similar and more readily available in many countries.

What can I use to replace mizithra cheese?

To replace fresh mizithra cheese use mascarpone, manouri, or feta. The aged product can be substituted with matured Cotija, Parmesan, or Kefalotyri. For a dairy-free option consider nutritional yeast which is a low-fat ingredient that offers a comparable cheesy flavor to food.

Mascarpone is a soft, slightly sweet Italian cheese that has a creamy, spreadable texture. It makes a good substitute for fresh mizithra and can be used in cheesecakes or as a topping on desserts or fruit salad. Mascarpone also adds a deliciously rich, silky texture to savory dishes and is perfect for thickening sauces.

Manouri is a semisoft Greek cheese that is a by-product of feta production, made with sheep or goat milk. It is produced in a similar way to mizithra although it does contain a higher percentage of fat thanks to the addition of heavy cream.

The cheese has a similar flavor to fresh yogurt although it doesn't have that same acidity. It is subtle in taste and slightly sour, with a light aroma.

Use Manouri to crumble over spaghetti and salads or serve as an appetizer, topped with tomato and oregano.

Tip: Check out our article on the best manouri substitutes.

Another cheese native to Greece is feta cheese. It is a crumbly, grainy cheese which makes a useful mizithra substitute. Feta is a well-known variety, found in most parts of the world in mainstream supermarkets so finding it won't be a challenge.

Although saltier, feta is delicious crumbled over baked dishes and salads. This option is not suitable for adding to sauces and soups as feta doesn't melt. 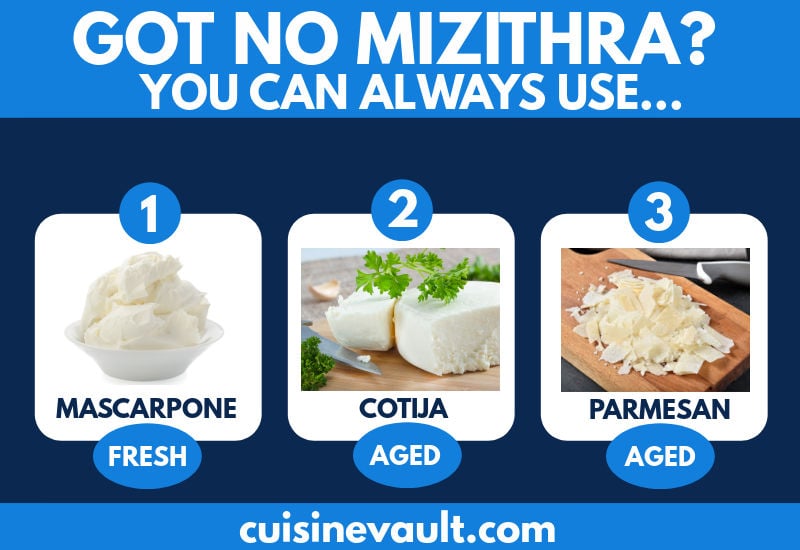 Cotija is a cow's milk cheese made in Mexico that is hard and dry with a milky, salty flavor. Whether you buy this product grated or in block form, it is an excellent aged Mizithra alternative which can be grated over soups, salads, or practically any Mexican dish. It adds delicious fatty richness and mouth-watering umami flavor to savory recipes, although it is a little less salty than mizithra.

Parmesan is a commonly available cheese that has a pale yellow color with a unique salty, tart flavor. It is a hard, granular type of cheese made from cow’s milk. Use this replacement to add depth of flavor to pizza, spaghetti, or your favorite pasta dish.

Kefalotyri is a Greek and Cypriot salty cheese that makes a useful aged mizithra substitute. It is a pale yellow shade with the occasional hole. The hard texture, sharp flavor, and strong aroma make it excellent for grating over any hot savory food like meat, pasta, or vegetable dishes.

Ricotta Salata is an Italian cheese that has been pressed and aged for over three months to produce a salty, dry cheese with a firm texture. It is a good replacement for mature mizithra.

The fresh variety of this cheese is known as Ricotta, a fresh, soft product. Rather than being salty, it has a slightly sweet taste with a hint of tart. This is a much more common cheese in stores and can be used as a backup for fresh mizithra.

Use Pecorino Romano as a delicious, aged alternative with a bitey taste. It is a hard, salty sheep's milk cheese made in Italy and is another excellent grating option. Check the specialty cheese section at most supermarkets and this variety should be available.

Nutritional yeast is generally sold as a powder or in flakes. It is readily available at health food stores and is becoming more popular in mainstream supermarkets too. This product is low in fat while being high in protein in vitamins. It is a popular choice for vegetarians, vegans, or anyone on a dairy-free diet looking for a cheese alternative. Sprinkle some nutritional yeast over your food for a creamy, salty, cheesy flavor.

Related reading:
What are some good creme fraiche alternatives?
How do I store cheese?
What are some useful manchego replacement options?

If you are looking to replace mizithra in cooking, then you need to consider whether the recipe is calling for fresh or hard cheese. To replace the soft version, you can use mascarpone, manouri, or feta. The aged version can be replaced by Cotija, Parmesan, or Kefalotyri.

There are other options which we didn't list as they are a challenge to find. One example is Anthotyros, a Greek cheese produced with whey and milk from either goat or sheep milk. The fresh and aged varieties are very similar to mizithra, although Anthotyros uses less whey when produced.

What is your favorite Greek cheese? Please let us know in the comments below.