These keto stuffed peppers will quench your hunger in seconds. It's a perfect combination of veggies and meat, making it a perfect keto lunch or dinner. They are not just delicious, but filling, and at the same time low-carb.

My goal was to make a minimum carb keto-friendly dish, and I succeeded. I took the traditional stuffed pepper recipe as the basis for this one but removed some of the high-carb ingredients, such as rice. And as a result, this recipe turned out even better than the one that I used to make before.

What Meat Type Is Best for Keto Peppers

I've tried to make the keto stuffed peppers both with lean ground beef and extra lean. Both of them turned out great. But since I like to grind meat by myself, I've baked the peppers with other meat as well, such as pork and venison.

Chicken isn't the best option here since it doesn't contain as much fat as the other meat types. But you can always add some olive oil to it when frying, just to increase the fat in the keto stuffed peppers.

Use Other Veggies for Stuffing

If you're not a fan of bell peppers, there are other vegetables that can replace them in this recipe and will turn out even more delicious than with the peppers. For example, try to stuff the meat mixture into zucchini. It will be incredibly juicy.

Other vegetables that are also great for this recipe are squash and eggplant. My personal favorite is eggplant. It has a very specific taste when baked in combination with ground beef. So, you can choose whichever vegetable you like better and use it to stuff the meat.

What Cheese is Best for This Recipe

Here I used cheese only for topping. I didn't give any to the ground beef mixture. I usually always use shredded mozzarella cheese for most of the recipes.

You can also add any other keto-friendly cheese type. Some of them are Colby Jack, cheddar, and pepper jack.

How to Bake the Keto Peppers in the Oven

Here are some tips that you should know before placing your stuffed peppers in the oven:

Use the Slow Cooker Instead of the Oven

If you want to make this recipe beforehand but have some other things to do, using a slow cooker for baking the stuffed peppers in is a great choice. It won't take much time to bake there. And the best thing is that you can leave them there and go on with other work that you have to do.

To bake them using this appliance:

My favorite way to serve the keto stuffed bell peppers is by adding some sour cream on top just before eating. The sour cream's taste ideally combines with the ground beef and pepper flavor.

If you want to increase the amount of fiber in your daily diet, then make a salad from leafy greens and fresh veggies.

Since I didn't include cauliflower rice into the stuffed peppers, you can make a cauliflower puree to go with the meal.

What to Do With the Leftovers

So, you've eaten two stuffed bell pepper halves. But what to do with the rest? If you have a big family, they definitely won't resist the mouth watering smell of the baked stuffed peppers.

Otherwise, you can store the leftovers from the meal in the fridge for up to 3 days. To heat them, place them on a plate and microwave for 1-2 minutes, depending on how your microwave operates. 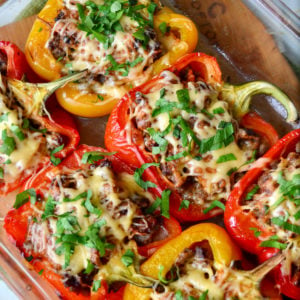 These keto stuffed peppers will quench your hunger in seconds. It's a perfect combination of veggies and meat, making it a perfect keto lunch or dinner. They are not just delicious, but filling, and at the same time low-carb.
5 from 3 votes
Print Recipe Pin Recipe
Prep Time 10 mins
Cook Time 35 mins
Total Time 45 mins
Course Main Course
Cuisine American
Servings 3
Calories 1704 kcal