This keto chicken and dumplings recipe is hearty, comforting, filling, and of course, low-carb. It is also Whole30, Paleo, and Gluten-Free.

This recipe requires only simple ingredients and takes only 45 minutes to make. Even if you are the only one in your family that's following the keto diet, no one else will notice that this soup is low-carb since it is insanely delicious.

On its own, chicken soup is keto-friendly, but for this dish, the problem was the dumplings. But with the right ingredients, these dumplings turned out not just low-carb but amazing at the same time.

What is Chicken and Dumplings?

Chicken and dumplings is basically a soup. Usually, it is made from chicken, broth, some vegetables, spices, and of course, dumplings.

Dumplings are made of dough. And it is exactly the dumplings that make the traditional chicken and dumplings not compatible with the keto diet. But with the right dough, it's possible to make the dumplings low-carb and keto-friendly.

How to Make Keto Dumplings

I've tried many different low-carb dumpling recipes before. But many of them were either too complicated or just tasted really weird. After some failures, I finally found the perfect keto dumplings recipe.

Here are the ingredients that you'll need for the dumplings:

As you might've noticed, this dumplings dough is pretty similar to the famous fathead dough. But this dough recipe won't be as firm as the usual one, and that's how it should be. So don't worry if you'll have trouble making the dumplings. To make it easier, there's a simple trick: use wet hands to form the dumplings.

Aside from the dumplings dough, you'll also need to make that chicken soup. Here are the ingredients that I used for this recipe:

That's it! Just a few simple ingredients, and you'll have your keto chicken and dumplings ready in no time.

Even though the instructions for this keto chicken and dumplings recipe are pretty straightforward, there are some tips that you might find helpful:

Since this is a soup, you can add some fresh chopped parsley before serving it. It will make the soup look even more appealing and will add more flavor. But if you don't like parsley, it's OK to serve the soup just as it is straight from the pot.

You should store this keto chicken and dumplings soup in the refrigerator. This way, it will last up to 3 days. But just like with all low-carb dough, there is a chance that the dumplings will fall apart. So it is best to eat the soup as soon as possible. 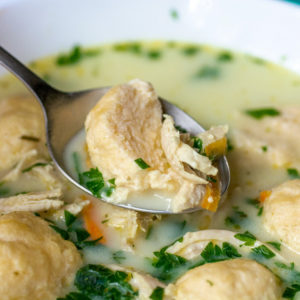