Cookware » Cast Iron » Your Guide to Cooking With Cast Iron

When it comes to cooking, the products you use make a world of difference. Not only do you need to make sure that you use the right type of cookware, but you also need to use the best materials.

Cast iron is an excellent option that comes in a wide variety of shapes and sizes. Because of its durability and versatility, many chefs swear by cast iron and use it all the time. However, because this metal requires more care and attention, some amateur cooks can feel hesitant about using it.

So, we wanted to look at what to cook in cast iron and how to use this material effectively. Here's everything you need to know. 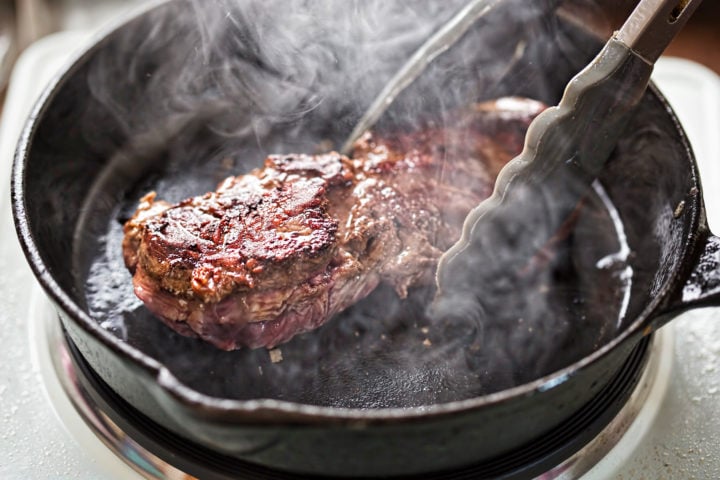 What is Cast Iron Cookware?

This material dates back to the sixth century in China. Iron has long been used for various purposes, including cooking and tool-making. There are a few varieties of iron, and cast iron gets its name from how its made. Iron ore is melted in a blast furnace, then poured into a cast to harden into a specific shape.

This production process leaves surface impurities in the metal, which is why bare cast iron skillets and pans have tiny bubbles in them. These impurities work well for cooking because they can absorb oil to create a nonstick pan. While other frying pans and skillets may be non-stick, cast iron is naturally better at it. That said, you can also get enameled cast iron, which is an even better option for non stick cookware.

That said, as we'll discuss later, you do have to put some extra care and attention into your cast iron cookware. Unlike stainless or carbon steel, you can't just wash your iron skillet and be done with it.

Although many chefs swear by cast iron, this material is not 100% perfect. So let's dive into the advantages and disadvantages you can expect from cast iron pans.

As long as you take care of your cast iron skillet, you shouldn't need to use non-stick coatings like vegetable oil sprays. As we mentioned, the cooking surface absorbs oil automatically, which helps prevent food from sticking.

If you've ever heard of seasoning your cast iron pot or pan, the term means baking cooking or canola oil into the metal to ensure a non-stick surface. You can season your pans yourself, or you can take them to a professional. Once you've seasoned your pans, it's much easier to reseason them later on.

Technically speaking, cast iron is more brittle than stainless steel or copper. However, that only matters if you accidentally drop your cast iron pan or skillet on the ground. Even if you do, chances are that it won't break in half. Instead, cast iron cookware can easily last decades. Some families have passed down their cast iron grill pan through multiple generations without losing any cooking abilities.

Con: Cast Iron Takes a While to Heat

One of the issues with cast iron skillet cooking is that the pan won't heat up as fast as carbon or stainless steel. If you're in a rush, cast iron can be a bit too cumbersome. However, as we'll discuss later, this material is excellent for low and steady cooking. For example, a cast iron dutch oven can sit over hot coals for hours and make a perfect cobbler dessert. Overall, this issue is primarily a problem for a frying pan or grill pans.

Iron is a necessary element in your body. If you don't get enough iron, you can experience various health problems like anemia. Since cast iron is so porous, it will naturally leach into your food. While most people in modern society don't have to worry much about iron deficiencies, it's nice to know that your cast iron skillet has your back.

If you're not used to cooking with cast iron, you may be surprised by the weight of each piece. Compared to carbon steel or other metals, cast iron is much denser and heavier. This density can work in your favor when making some dishes, but it can also make the pan harder to use.

What to Cook in Cast Iron?

Now that you know the pros and cons of cast iron cookware, let's look at some cast iron skillet recipes. However, rather than providing full recipes, we'll outline the best things to cook in cast iron based on ingredients. Whether you're an old pro at using cast iron or you're brand-new to the material, these recipes are sure to bring out your inner gourmet chef.

When practicing cast iron cooking, you'll want to take advantage of the metal's non-stick capabilities. Since meat can often cling to other metals, you can get more mileage from a cast-iron skillet. The best meats to cook in one of these pans include:

Meats aren't the only thing that can benefit from even heat during the cooking process. Roasted vegetables work beautifully in a cast iron pan or skillet. Some examples include:

Once again, cast iron's natural non-stick abilities come to the rescue. You shouldn't need to place anything beneath your ingredients to prevent them from sticking to the bottom of the pan. Some delicious baked treats you can make in a pan or dutch oven include:

Tips and Tricks for Getting the Most From Your Cast Iron

If you're new to this material, you're probably worried that you might ruin your pot or pan. In most cases, you're likely overthinking and coming up with problems that aren't real. Here are some top tips for making cast ironwork better for your needs.

Don't Shy Away From Cooking Oil and Fat

As we mentioned, seasoning a cast iron pan means baking oil into its surface. If you want to avoid reseasoning every year, you can simply cook high-fat foods. Doing this will automatically allow most of the grease to seep into the metal, ensuring that it stays non-stick forever with minimal maintenance.

One issue with cast iron cooking is that the handle can get hot since it doesn't have a protective covering. We recommend wearing an oven glove or wrapping the handle with a damp paper towel. Otherwise, you might get burned by accident.

One warning you may have heard about cast iron is that soap is forbidden when cleaning. The issue is that the soap can soak into the surface and then leach back into your food later on. While this idea is a bit of a myth, soap will erode the oil that has been absorbed into the pan. Fortunately, this tip ensures that you don't have to spend hours scrubbing your cast iron skillet to get it clean. Just scrape off any big bits, and you'll be fine.

Make Sure to Dry Your Pans

Cast iron can rust pretty easily if it gets damp. Once you're finished washing your pan, leave it on the stovetop for a few minutes with low heat. Doing this will help any excess water evaporate, leaving a clean and dry lodge pan.

FAQs About Cooking With Cast Iron

There is a lot of information about cast iron cookware, but not all of it is truthful. Here are some answers to frequently asked questions about this material.

Since you're not "supposed" to use soap, you may think that it's impossible to get cast iron pots clean. However, remember the non-stick surface. In most cases, you can simply scrape off any leftover bits, then wipe the whole thing down with a scrub sponge. As long as you're not using steel wool (since it will remove the seasoning), cleanup is a breeze.

The answer depends on what you're cooking. If you're tossing some tomatoes or lemon juice into the pan, don't worry about it too much. The problem is when you're simmering acidic foods for long periods. So, you'll want to skip the tomato sauce in a cast iron pan. Otherwise, the acidity of your food shouldn't matter.

If my cast iron rusts do I have to toss it?

No, you don't. Rust can be removed pretty easily from cast iron. Simply scrub off any noticeable spots, then rinse the metal to wash off any lingering dust. You'll want to reseason your pan or skillet afterward to ensure that it will get back to its non-stick status.

Overall, don't overthink what to cook in cast iron. That said, you might want to practice various dishes so that you can learn the nuances of the material. For example, there will be hot spots at first, but eventually, the metal will get hot and stay hot for a while. Once you master the minor learning curve, you'll be able to cook anything in cast iron (as long as it doesn't have too much lemon juice or tomato sauce).