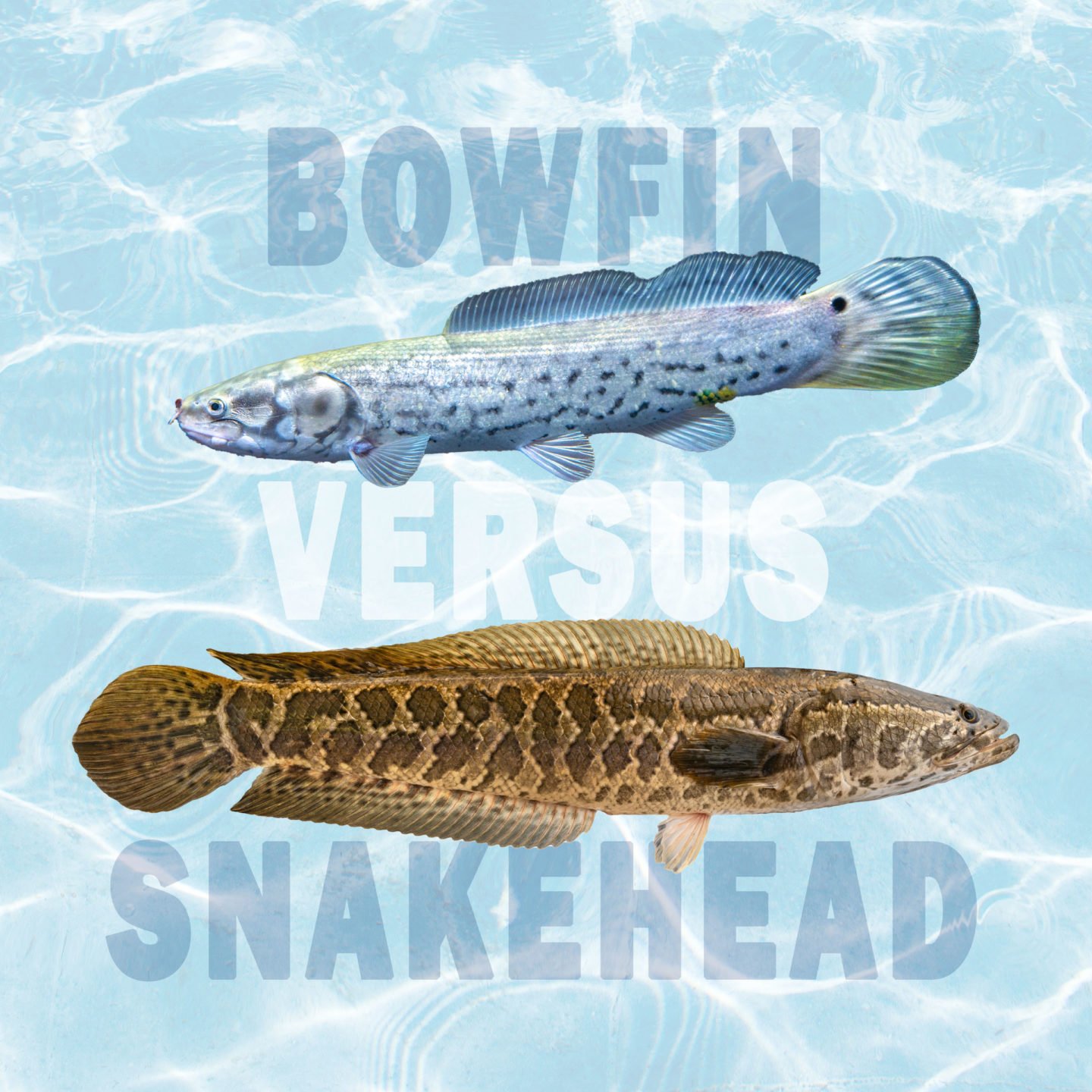 Read on to learn the key differences between bowfin and snakehead, including their appearance, habitat, taste, and texture. This article also provides a quick snakehead recipe, so read until the end.

Of the two fish species, bowfins are widely found in North America. If you think you might have one at the end of your hook, keep an eye out for these identifying factors:

Bowfins are medium-sized fish, averaging 8 lbs and 24 inches in length. They have an elongated body, not unlike an eel, with a bow-shaped dorsal fin that runs from the middle of their back to their tail fin. Their heads are hard and flat, with large mouths lined with very sharp teeth.

One of their most easily identifiable features is their color. Unlike the snakehead, the bowfin fish is an even shade of tan, brown, or dark black across most of its body. Their bellies are pale white, and their fins are a lighter shade, nearly yellow or gold.

One key trait to pay particular attention to can be found at the base of their tail. There you can find a dark black spot about the size of their eye. However, this is only found in males of the species.

Bowfins are freshwater fish that are native to North America. They can be found in the western half of the continent, especially near the Mississippi River, Gulf of Mexico, Great Lakes, and eastern shore.

They prefer low-oxygenated water, which usually means slow-moving bodies. These include swamps and lakes dense with vegetation.

Bowfins are edible, though many anglers consider them an unappealing catch, even going as far as to label them “trash fish.” However, there’s nothing particularly bad about their flavor, smell, or texture as long as they are prepared correctly. Most people would describe their taste as bland, somewhat similar to cod or tilapia.

However, like most other fish, their flavor can change drastically depending on what kind of water they were raised in. Muddy water will impart a muddy flavor, and bowfin raised in swamps will have an unappealing tang.

Their texture is also unappealing. Thus, these fish are sometimes called cottonfish because of their texture when eaten. They’re a bit meatier than catfish and firmer than trout or bass.

RELATED Sailfish vs. Swordfish: All Their Differences

Snakeheads are much less common in North America than Bowfin, though there are many places you can still find them. If you think you’ve spotted one, see if they have any of these traits:

You probably wouldn't have much difficulty telling them apart if you were to hold a northern snakehead and bowfin side-by-side. However, while these fish are similar in size, their coloring is completely different at 6 lbs and 22 inches long on average.

Snakeheads have an overall brown color but can be identified based on the dark splotches covering them from head to tail. They also have spots on their fins, but unlike the bowfin, they do not have a large black spot on the base of their tail.

If you found a long, flat-headed fish in North America, chances are it’s not a snakehead but a bowfin. Snakeheads are native to Asia and Africa. While they share several visual characteristics, they evolved separately and didn’t have much in common.

However, snakeheads have been introduced to North America in some places and are considered an invasive species. As a result, you can rarely find them in some of the same habitats as bowfins, like Lake Michigan, Rhode Island, and the southern stretch of the Mississippi River.

They stay close to the shallower waters of lakes, ponds, streams, and creeks. They use the vegetation they find there as cover when hunting.

While most anglers don’t consider bowfin a good meal, snakeheads are much more fit for the dining table. They are not very fishy and have a firm, flaky texture that makes them versatile for various dishes.

Like bowfin and other fish, their water quality plays a significant role in their flavor. Because of this, snakeheads caught in rivers and streams are generally better to eat than ones in small lakes and ponds.

Can Bowfin and Snakehead Substitute for One Another?

Since snakehead and bowfin have such wildly different flavors, it is probably better to avoid substituting one for the other. However, if you’re looking to have one for dinner, the snakehead is the better of the two options as it has a milder flavor and a more tender texture.

RELATED White Crappie vs. Black Crappie: All Their Differences

How to Cook Snakehead

There are various ways to enjoy the mild, delicate flavor of snakehead fish, though one of the best is fried nuggets. Before you get started, make sure you have all these ingredients and supplies on hand and ready to go:

Before enjoying them, one thing to know about snakeheads is that they have plenty of bones. That’s why it’s always best to double-check your fillets before serving them. To do so, feel along its edges with your palm, looking for any hard, pointy bits.

If you find any bones, you can cut off a bit more of the meat or pull them out with a small pair of pliers.

To make sure the fish cooks evenly, cut them into bite-sized chunks. Each piece should be about the same size, so none are over or under-cooked.

2. Toss the Fish in Flour

Next, sieve a cup of flour into a large mixing bowl to ensure all the clumps have been removed. Then mix in a half teaspoon of salt and, if you like, a few cracks of black pepper or other seasonings. When your flour mixture is thoroughly blended, toss your fish chunks and set them aside.

You want your oil between 350 and 375 degrees Fahrenheit to fry your fish properly. Too hot, and your breading will burn. Too cold, and your fish chunks will end up greasy.

Heat your oil over a medium flame and watch until your thermometer reads correctly. If you are working in multiple batches, don’t forget that the oil needs time to heat back up after every batch.

Once your oil is up to temperature, gently place each fish piece into the oil. Be sure not to overcrowd your oil, as this will cause the nuggets to stick together or undercook.

Let your nuggets fry until they are golden-brown, and place them on a plate lined with paper towels.

To enjoy your snakehead properly, you should eat them immediately. Serve with a squeeze of lemon or dab of tartar sauce.

Do bowfins go by any other names?

If you’ve never heard of bowfin, you may have run across one of its many nicknames instead. Dogfish, swamp bass, cypress trout, mudfish, cotton fish, grindle, marsh fish, and scaled ling are just a few of the names given to this fish.

Depending on where you live, catching or owning a snakehead fish can be illegal. Specifically, Alabama, California, Texas, Florida, Washington, and Virginia have banned the species altogether. In fact, many state governments encourage those who catch snakeheads to kill them and dispose of the body rather than throw them back alive.

The reason is that snakeheads are actually an invasive species in North America. They were introduced to the continent by people looking to establish a breeding population. The problem is that they threaten to overrun natural populations and disrupt the local ecosystem.

How big can bowfin fish get?

The average bowfin fish is only a little more than 8 lbs, though they have been found in the wild much larger. The largest bowfin ever recorded was a whopping 21 lbs and 34 inches in length.