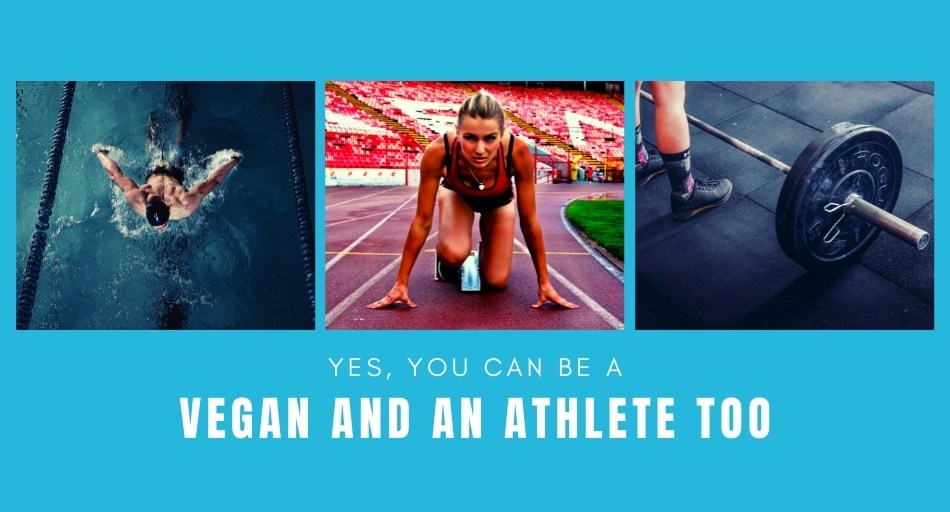 Veganism is one of the most popular diets these days. Many people choose it either for their love of animals, environmental reasons, or even some health conditions.

Vegans and those following a plant-based diet often struggle with getting enough protein since they don’t eat high-protein foods, particularly animal products.

But there are actually many plant-based alternatives to animal products that are high in protein.

Because of that, being a vegan doesn’t have to stop anyone from becoming a professional athlete.

This is a career and lifestyle that requires you to consume a lot of protein, so veganism might seem like an unsustainable diet.

But there are actually many athletes that follow a plant-based diet and are successful with it.

When you’re a vegan, it can be difficult to get enough protein each day since you don’t eat meat. But these days, there are various alternatives to meat-based products that are high in protein.

So, being a vegan doesn’t stop you from becoming an athlete. In fact, some people claim that they can perform even better when they don’t eat meat.

Where do vegans get their protein from?

Even though meat, dairy products, and seafood are some of the best sources of protein, there are many plant-based protein sources. Some of the best ones include:

Ensuring that you eat a balanced mix of these foods will help you get enough protein each day. A healthy adult needs to get anywhere between 46 to 56 g of protein each day. But if you’re an athlete or work out a lot, you might need more.

Do vegan athletes miss any nutrients?

Vegetarian and vegan diets restrict eating animal products, which also means that they’re not getting some nutrients primarily found in these products.

Because of that, they sometimes might need to take supplements to compensate for that.

These nutrients are not only crucial for your overall health but also for muscle synthesis and recovery.

Luckily, vegan athletes can either supplement these nutrients or consume more foods rich in these nutrients. For example, beans and iron-fortified cereals can help you get enough iron.

For calcium, vegans can choose dark leafy greens or milk alternatives. Other fortified foods can provide you with vitamin B12 and vitamin D as well.

When it comes to zinc, try eating whole grains and fortified cereals along with vegan alternatives to dairy products.

So, make sure you’re getting a lot of these to avoid vitamin and mineral deficiencies if you follow a vegan diet.

Even though it might seem that consuming animal-derived protein products is the best way to ensure proper physical performance, studies actually show that following a plant-based diet doesn’t lead to worse effects.

In fact, if athletes get enough protein and other nutrients, even if they’re plant-based, they seem to have the same (or even better) endurance and strength as their animal products-fed counterparts.

Because of that, many athletes these days – especially those looking to live a more sustainable diet – switch to a version of a plant-based diet. And their results don’t suffer.

On the other hand, some athletes, particularly those in extreme sports, may find it difficult to get enough protein just from plant-based sources. So, this diet might not be perfect for everyone.

But there are ways to adjust it. For example, many athletes first start with a pescatarian diet.

On this diet, you don’t eat meat, but you can consume fish. That way, you can ease yourself into a purely vegan diet.

This Formula 1 champion has stated in interviews that his only regret is that he didn’t go plant-based sooner. Hamilton swears by veganism, saying that he feels more energized and focused.

He says that people should make the transition to a vegan diet slowly, giving their body time to adjust to the new way it gets nutrients.

Some of the things Hamilton eats include porridge, beans on toast, vegan pancakes, falafel sandwiches, vegan chili, and a quinoa bowl.

All of these dishes are rich in essential nutrients and provide a lot of protein, which is important for professional athletes.

At the end of the day, Hamilton says that while a vegan diet is great, it’s not for everyone. There are a lot of foods you have to give up, so whether it’s for you is a very personal choice.

Australian tennis player Nick Kyrgios hasn’t always followed a vegan diet. Only recently, in 2020, he started to make the transition to a more plant-based diet and, ultimately, a vegan one.

In fact, the Australian bushfires have inspired him to stop eating animal-based products, so he stopped eating meat and dairy at first.

Then, he even partnered with Beyond Meat to completely eliminate meat from his diet.

So, while his initial reasoning for going vegan was focused on preventing animal cruelty, he actually stuck with this diet and found that it doesn’t negatively impact his career in any way.

This Serbian tennis player had surprised his fans when he said he follows a vegan diet.

But he has hinted in many interviews at the fact that he doesn’t eat meat and other animal-derived products.

Just like many others, Djokovic started out by removing gluten, dairy, and refined sugar from his diet.

Initially, he did that to improve his health issues, such as mild asthma symptoms and other respiratory problems.

These changes have not only helped him but also encouraged him to go even further. Over the next few years, he stopped eating all types of meat and animal-derived products.

Since he’s one of the most famous athletes in the world, it’s evident that this diet can be good for you.

This pro surfer, Tia Blanco, has actually never eaten red meat in her entire life. Later on, thanks to the influence of her vegetarian mom, she went completely vegan around 2013.

Blanco is not only a proud vegan surfer, but she also promotes vegan eating along with various recipes on her Instagram page.

Through that, she shows her fans that vegan eating can be sustainable but also not boring.

For sustaining her vegan diet as an athlete, Blanco credits her parents, but also filling her diet with lots of protein-rich foods and staying active as much as possible.

Sometimes she even spends eight hours on the water, surfing.

Blanco is also an avid believer in educating yourself about your nutritional needs, regardless of what diet you follow.

This Women’s National Soccer Team star gave up meat and dairy back in 2017, and she’s been vegan ever since.

Even though many people don’t associate soccer with veganism, Morgan is proof that it can be incredibly beneficial.

In fact, this athlete says that following a vegan diet helps her recover faster after exercise, and it also makes her feel less tired and exhausted in general.

Morgan also claims that she’s become even fitter and leaner after switching to a plant-based diet.

When asked why she went vegan, Alex Morgan said that it was for ethical reasons as a result of the factory farming practices in the United States.

She also said some of her favorite meals include oatmeal, a veggie burrito bowl, salad with nuts and avocado, and peanut butter for a snack.

Morgan Mitchell is a vegan Olympic runner who thrives on a vegan diet. She removed all animal products from her diet back in 2014 after watching a documentary about the meat industry.

Even years after, she says it has been one of the best decisions she’s ever made. She also said that one of the best benefits she’s gotten from going vegan was reducing recovery time, which is very important for her.

Another thing she claims being vegan helped her with was boosting her immune system. She says she almost never gets sick after switching to a plant-based diet, which is a great benefit for athletes.

Along with physical benefits, Mitchell said she also feels happier and more energized.

This retired Iranian-born German-Armenian strongman and former bodybuilder promotes veganism even in his retirement.

Baboumian went vegetarian in 2005 and became fully vegan in 2011. He’s another athlete who has switched to a plant-based diet for environmental and animal rights reasons.

He has also said that vegan foods can be an even better source of protein, fiber, complex carbohydrates, and healthy fats – as long as you know how to eat them right.

Just like many others, Baboumian has a reduced risk of diabetes, cardiovascular conditions, and high cholesterol levels.

So, if you needed that additional push to try a vegan diet, this might be it.

Venus Williams is very focused on feeling her best and staying healthy, so she chose to follow a vegan diet.

She has said herself that she eats mostly plant-based foods but sometimes may cheat, calling herself a “chegan,” which is a vegan who cheats.

Her approach might be one of the most realistic ones, as many people generally struggle with rapidly changing their diets. So, if you want to try being a vegan, start with her approach and slowly replace most animal-derived products with plant-based ones.

Williams first changed her diet when she was diagnosed with Sjogren’s syndrome, which is an autoimmune disease.

She said that going vegan has allowed her to manage her condition without medication, which is a wonderful benefit.

But while she follows a mostly healthy, balanced diet, she also says that having a cheat day is crucial to staying mentally healthy and happy.

Colin Kaepernick is a well-known U.S. football player, and he is also a vegan. He confirmed that he went vegan at the end of 2015, citing ethics and health as his reasons.

Kaepernick himself says he feels much better after switching to a plant-based diet despite reports that the NFL worries about his eating habits and career.

But in spite of that, he’s never been fitter and stronger than on the vegan diet.

Aside from that, he’s great proof that professional athletes don’t have to eat meat to stay in a great physical condition and maintain their strength, as he’s still in his prime.

Jermain Defoe has initially been vegan but now sticks to mostly fresh veggies and fruits with some fish from time to time.

He has often praised the vegan diet for its health benefits, both for your body and mind.

What’s more, Defoe cites his diet as the reason his career lasted as long as it did. He said that he felt his physical performance improve, as well as he noticed that he got injured less frequently than before.

He also advocates for other athletes to be mindful of they feed their bodies, as it has a tremendous impact on the health and endurance of their bodies, especially for professional athletes.

As you can see, it’s entirely possible to be a vegan and an athlete – even a very successful one.

There are many people choosing plant-based diets these days, so it’s not surprising that some of them are professional athletes.

The only thing to remember about being a vegan athlete is that you have to get enough protein from plant-based sources like tofu, quinoa, beans, and similar. This nutrient is crucial for maintaining muscles.