In recent years, the number of various diets has been increasing rapidly. From the ones low in certain macronutrients to those that stay clear of animal products, there's something for everyone. One of the most popular ones is veganism. Vegans refrain from eating meat and all animal products, including dairy. 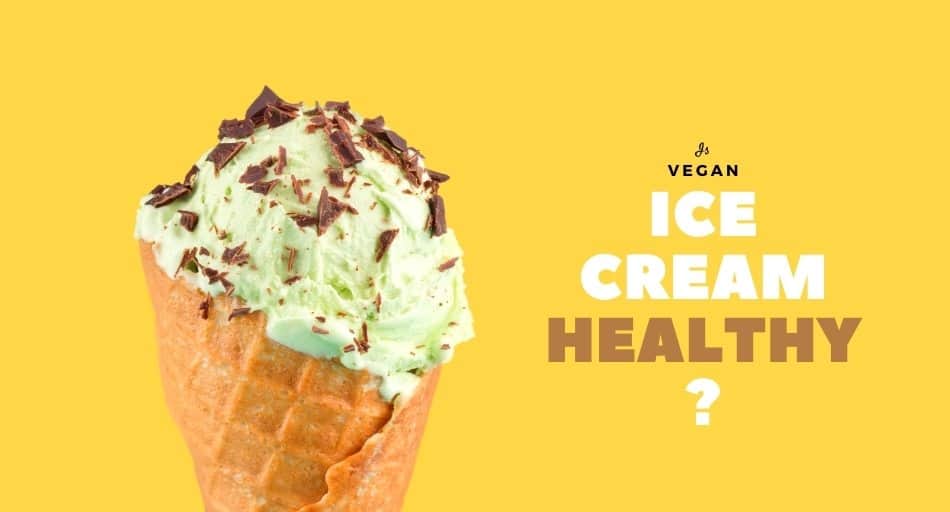 As a result, there are many vegan alternatives to popular food items, including ice cream. However, is vegan ice cream healthy?

Vegan ice cream has fewer calories and less fat than its dairy counterparts. Thus, it might help people lose weight. It's also suitable for people suffering from lactose intolerance and those on various diets, such as keto, low-fat, or vegan. It does contain many nutrients, but despite these benefits, it's not exactly healthier than dairy ice cream.

How healthy is vegan ice cream?

Dairy-free desserts, including ice cream, replace milk with coconut, soy, almond, or cashew milk. The rest of the ingredients remain relatively the same. The most preferred choice of dairy-free milk by manufacturers is coconut milk since it contains a love of saturated fats, giving the ice cream a creamy texture and flavor.

However, this also means that it may be higher in calories than ice cream made with other dairy-free kinds of milk.

Saturated fats can elevate cholesterol levels, leading to high blood pressure and an increased risk of a heart attack. As a result, always make sure to check the label before buying the ice cream. Aiming for vegan ice cream containing less than 200 calories per serving is the best choice.

It's also important to look at the sugar and fat content as some brands add sweeteners to compensate for the lack of dairy.

On the other hand, vegan ice cream doesn't contain any lactose and sugars present in milk, so it's less likely to upset your stomach. If you're lactose intolerant, this is definitely a good choice as you can enjoy your favorite dessert without worrying about any digestion problems.

Furthermore, coconut milk contains healthy fats (a lot of them, so make sure not to overdo it), helping you feel full after a meal.

Vegan ice cream has also been proven to help clear your skin. Many people say that after switching to a plant-based diet, their skin has improved. Dairy might cause some skin conditions, such as acne and eczema, but more studies need to be done to confirm it. While some people might not notice a difference, it's definitely worth trying if you're experiencing skin issues.

One of the most important benefits of choosing vegan ice cream is that it's animal friendly. Animals are often forced to breed in small spaces, living in cramped conditions. As a result, many people choose to go vegan to prevent this from happening. Vegan ice cream is also better for the environment since it's completely plant-based.

Vegan ice cream — especially the kind made with coconut milk — is very high in calories. As a result, it's important to remember that it's not a healthier choice than dairy ice cream, especially if your goal is weight loss. Vegan ice cream is high in saturated fats and sugars, which are fattening, and it's incredibly easy to overeat it. Hence, portion control is important.

Nevertheless, it's still possible to eat ice cream and lose weight. It's important to control the amount you're consuming and make sure that you check the list of ingredients and choose the healthiest option. To do that, choose vegan ice cream that's low in saturated fats and sugar, ensuring that additives and sweeteners don't replace these ingredients.

Furthermore, the healthiest vegan ice cream is the one you make yourself. It's a very easy process, and there are loads of recipes online, catering to everyone's tastes and dietary needs. Making vegan ice cream yourself also allows you to control how much coconut milk you're using as well as what ingredients you're putting in.

Which type of vegan ice cream is the healthiest?

All types of vegan ice cream are great alternatives to dairy ice cream for people with lactose intolerance. They won't upset your stomach while still allowing you to enjoy this delicious dessert. However, there are certain things to remember when choosing vegan ice creams, such as the ingredients and the type of dairy-free milk that was used to make the ice cream.

While the most popular vegan ice cream is made from coconut milk, there are many other types available on the market, such as the ones using almond milk or soy milk. Vegan ice cream based on coconut milk is the creamiest and is good for people with a nut allergy.

It's also the most ice cream-like of them all. However, it's high in sugars and saturated fats, making it unhealthy, especially if consumed in high quantities.

On the other hand, vegan ice cream made from almond or soy milk is significantly lower in calories but still dairy-free. In addition, these kinds of vegan ice cream are lower in sugar, which means that it's digested easier than dairy ice cream and coconut milk-based ice cream.

Vegan ice cream is most often made with coconut milk, which is a wonderful alternative to cow's milk. However, when considering its health benefits, it's important to remember that it's still a dessert. This means that if consumed in high quantities, it's unhealthy and will cause weight gain.

As a result, indulging in an occasional serving of ice cream is perfectly alright, but make sure to remember about moderation as that's the key.