Pizza is by far one of the most popular dishes on the planet. You can add anything you want to pizza from meats, veggies, and even fruit. With thousands of different combinations of sauces, toppings, and cheeses, pizza truly can do it all. 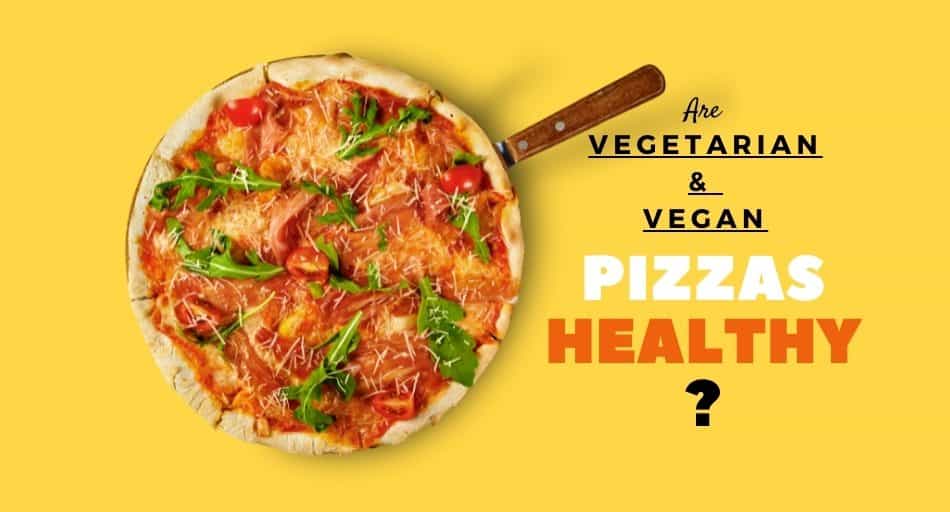 One of the best things about pizza is that it's relatively easy to turn it into a vegetarian dish, and now with all the vegan options on the market, easy to make it vegan too. People are always saying their opinion on whether vegan and vegetarian lifestyles are healthy or not. Pizza is traditionally not incredibly healthy for you, so what about the meatless options?

Are vegan and vegetarian pizzas healthy?

Vegan and Vegetarian pizzas can be healthy! The primary ingredient that makes traditional pizza unhealthy is the processed meat that is normally on them. When you choose a vegetarian pizza, you are probably only eating a cheese pizza or several veggies on the pie. As for vegan pizza, they can still be a healthy option for you. Since there are no processed meats or animal products, it's an entirely plant-based meal that more than likely has some great nutrients.

RELATED The 6 Best Pizza Stones for Grills in 2022

There's a couple of things that make pizza unhealthy for you. Let's start at the crust. The pizza crust is just bread, and generally, bread isn't terrible for you. In fact, our bodies need carbs to function properly. Where pizza crust begins to get unhealthy is when it's slathered with butter. This extra fat will no doubt be delicious, but that's the start of where pizza becomes unhealthy.

Next up, the pizza sauce. Similar to the crust, the sauce isn't generally terrible for you. The issue is that tomato sauce tends to have a lot of sugar. As you may know, too much sugar isn't good for anyone. If you're making a pizza at home, using a zero or low-sugar pizza sauce is a great idea.

Next up, we have the cheese. Cheese is so delicious, and it wouldn't be pizza without it. But, when eaten excessively, cheese isn't good for anyone.

At the end of the day, eating a couple of slices of vegan or vegetarian pizza isn't bad for you. Vegan and vegetarian pizza can be unhealthy when you're eating too many pieces or even the entire pie.

When it comes to vegetarian pizza, there's not a whole lot of difference between meatless and traditional pizza. The only difference between the two products is that one has meat and the other doesn't. So you're probably wondering why it's healthy. Well, the biggest reason is there are no processed meats on it.

Other than that, it has similar nutrition properties unless you've added veggies. But, because you've removed the meat, it's still considerably more healthy.

Health Benefits of a Plant-Based Diet

One of the primary health benefits of eating less meat or no meat at all is that your blood pressure may lower. When you have high blood pressure, it can increase your risk for heart-related diseases and conditions.

Another health benefit is that it may help reduce your risk for type II diabetes. Scientists have conducted studies that have shown those who follow a plant-based diet or eat vegetarian a few times a week have reduced their risk for developing type II diabetes by close to 35%.

For those of you on a weight loss journey, cutting back on meat or meat entirely can help you lose weight. I know most people say you need meat to lose weight so that you can give your muscles protein, but there's plenty of other protein sources out there. Plus, most meat has a lot of excess fat that is not going to help you lose weight.

RELATED Yes, You Can Be A Vegan And An Athlete Too

Some of the Best Vegetarian and Vegan Pizza Recipes

One of the easiest ways to make vegetarian and vegan pizza, and most meals, healthier is to make it at home. Making pizza at home can be fun because you have full reign to do whatever you want. Plus, it can be a fun activity with kids, friends, or your significant other. Next time you're craving pizza, here are some of the best vegan and vegetarian pizza recipes to try at home.

I love Caprese salad, and if you put it on a pizza, I'm sold. For those following a vegetarian lifestyle or just wanting to try a veggie pizza, you'll make pizza dough or buy some pre-made dough at the store. To make the vegetarian version, you'll add sliced tomatoes, mozzarella, basil, and balsamic vinaigrette.

For the vegan option, you'll use all the same ingredients, except you'll need a vegan mozzarella cheese. You can purchase a product at the store of making your own cashew mozzarella. You'll assemble whichever version you prefer, bake, and enjoy!

If you love barbecue chicken pizza, you don't need to give it up when you go vegan or vegetarian. You'll need pizza dough. Homemade or store-bought is fine. You'll also need your favorite barbecue sauce, liquid smoke (optional), cheese, green onions, and one head of cauliflower. You'll chop your cauliflower into bite-sized pieces before slathering it in your barbecue sauce.

If you're choosing the vegan option, double-check the ingredients on your barbecue sauce to ensure it's 100% animal product-free. You'll assemble your pizza with the barbecue cauliflower, cheese, or choice (vegan or traditional), and then top with green onions. Lastly, you'll bake and serve.