Veganism and other plant-based diets are becoming increasingly more popular as time goes by. Whether for health or environmental reasons, more and more people choose to eliminate meat from their diet. 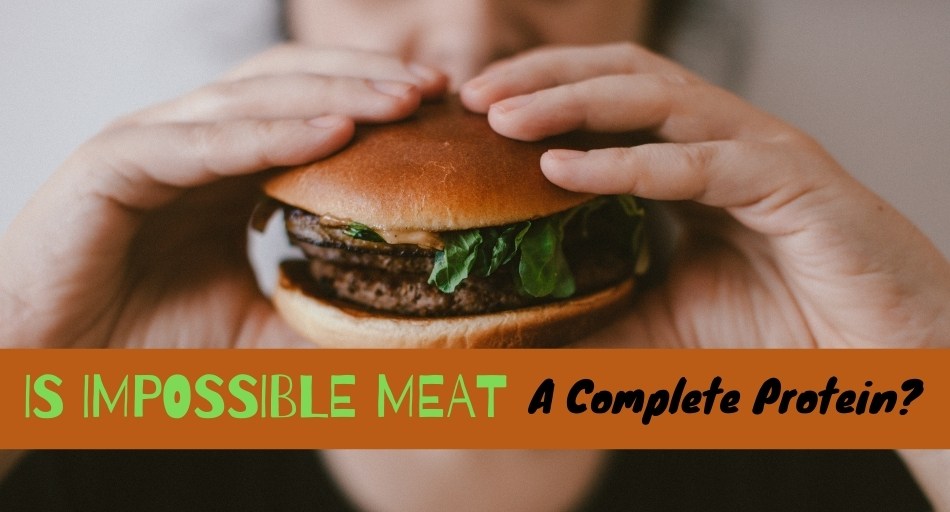 But since meat is the primary source of dietary protein, this leaves a high demand for other protein-rich foods.

So, with that, there are many companies that produce plant-based alternatives to meat. One of the most popular ones is impossible meat.

But are protein sources like that complete proteins? Or just a good source of this nutrient for vegans?

Is impossible meat a complete protein?

While impossible meat contains all nine essential amino acids, it often doesn’t contain them in sufficient amounts. That’s why you’d have to consume a large amount of this meat to get enough of each amino acid.

On the bright side, this meat is still rich in protein and other crucial micronutrients. Thus, if you’re following a plant-based diet, it can be a great choice for you.

Can impossible meat be considered a complete protein?

To put it simply, impossible meat does contain all nine essential amino acids. But unfortunately, the amount of each of them is rather low to fulfill your body’s need for these amino acids.

To compensate for that, you’d have to eat a large amount of impossible meat. But this comes with a lot of calories, which can lead to weight gain if you’re not being careful.

For that reason, it’s best to pair impossible meat with some other dietary source of these nine amino acids, thus creating a complete protein food pairing.

It’s also worth noting that not all brands of plant-based meats use the same ingredients. So, some might be higher in these nine amino acids than others.

It’s rather hard to check the specific amino acid profiles of each brand, though. So, if you want to be sure you’re eating complete proteins while eating impossible meat, pair it with other foods that are sources of these missing essential amino acids.

Is impossible meat good for you?

Impossible meat is a vegan-friendly and gluten-free alternative to meat. It already comes with a lot of health benefits for many individuals.

It also has a similar taste to beef burgers, which helps people transition to a plant-based diet, especially if they’re just starting out.

Impossible meat is also an excellent source of various micronutrients. For example, a 4-ounce (113g) serving of an impossible burger contains almost 20 times as much thiamin as you need each day.

Thiamin, also known as vitamin B1, can improve your memory, mood, and overall wellbeing.

Because of that, it’s often referred to as a “morale vitamin” since getting enough of it has been associated with improved mood and attitude as well as reduced symptoms of depression and anxiety.

Impossible meat also contains a lot of iron, around 4.2 mg in a single serving. Iron is important for the production of hemoglobin, which is a protein that helps transport oxygen throughout your body.

Getting enough iron also lowers your risk of anemia and other cardiovascular conditions. So, be sure to eat a lot of iron-rich foods every day.

A single portion of impossible meat also provides you with a great dose of vitamin B12. This micronutrient helps with red blood cells formation, birth defects prevention, and mood improvement.

Vitamin B12 also supports bone health, reducing your risk of osteoporosis and bone fractures, especially along with calcium and vitamin D.

One portion of an impossible burger also contains 50% of your daily need for zinc, which boosts your immune system and improves metabolism.

Zinc is also important for wound healing, sense of smell, and the health of your skin. In fact, eating a lot of zinc-rich foods is beneficial for people struggling with acne, as it reduces the symptoms.

Seeing as many people these days don’t get enough minerals, eating impossible meat from time to time can be good for you.

There are also some downsides to consuming impossible meat. One of the most common concerns is that it’s made with soy.

While it’s generally recognized as safe, some experts worry about the long-term effects of this type of protein, especially when consumed regularly.

So, it might be best to alternate impossible meat with other plant-based sources of protein like quinoa, beans, lentils, and nuts to avoid any side effects from soy.

Impossible eat also packs 16% of your daily recommended need for sodium in a single 4-ounce (113g) serving, which is a lot.

While important, this mineral can raise your blood pressure if you consume too much of it. This, in turn, increases your risk of strokes.

So, keep that in mind if your diet is based around plant-based meat alternatives, especially impossible meat.

How can you make impossible meat a complete protein?

It’s safe to say that most of us eat meat or other meat substitutes with other foods. It’s very easy to create a complete protein food pairing using impossible meat.

You can either serve the meat with soy sauce, which adds more amino acids already found in this type of plant-based meat. Another way to go about it is to serve impossible meat with chia seeds, carrots, wild rice, quinoa, yellow mustard, or hemp seeds.

Impossible meat comes in various versions, so you can make burgers, cutlets, chops, and many more. So, you can pair it with many whole grains and veggies, creating complete proteins.

Impossible meat is a great source of protein, but it doesn’t contain the nine essential amino acids in sufficient amounts to be classified as a complete protein.

It’s also best to eat it with other foods high in these amino acids to ensure you’re getting them each day.’

On the bright side, impossible meat is rich in various crucial nutrients, such as thiamin, iron, calcium, zinc, vitamin B12, and many more. So, it’s a great nutrient-rich protein source for everyone who doesn’t eat meat.