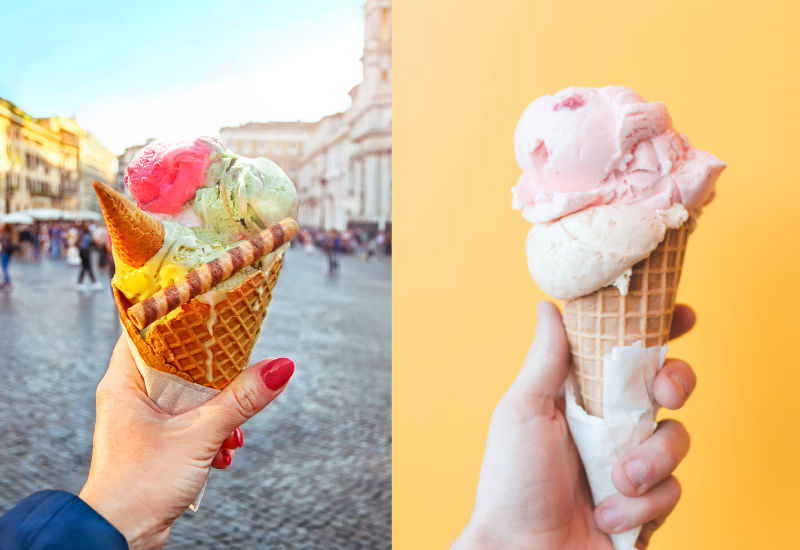 Ice cream and gelato get used interchangeably, which is understandable. They’re both much-loved frozen desserts that look and taste quite similar. Gelato even means ice cream in Italian, so should we all agree they’re the same thing? We’re about to give you an in-depth comparison of ice cream and gelato so that you’re armed with knowledge next time someone asks.

What’s the difference between gelato and ice cream?

Ice cream is typically made from a combination of cream and milk, which provides a creamy, rich flavor to the dessert. In the United States, the milk fat must be at least 10% to be called ice cream. Ice cream is churned faster than gelato, which causes more air to be whipped into it – known as overrun. Commercial ice cream will often have an overrun of over 50%, which results in a light, airy texture. 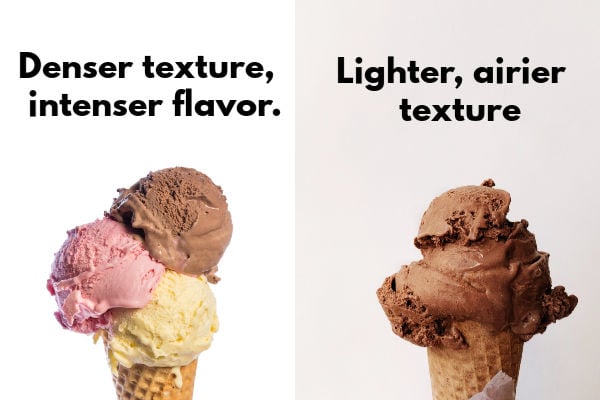 Gelato is denser and intenser in flavor than ice cream.

Gelato is usually made without cream; instead, whole milk is the main ingredient. The absence of cream results in a lower-fat dessert, compared to ice cream. The milk fat percentage ranges between 4-8%. With less fat, there is less of a buttery coating on the tongue. Gelato makers churn the mixture at a slower speed, so less air is incorporated into the frozen dessert. Overrun in gelato often ranges from 20-35%, resulting in a softer, denser texture.

The taste of both gelato and ice cream will depend on the recipe and ingredients added. However, gelato tends to stick with more traditional flavors, especially at gelati stores. Ice cream parlors tend to “push the boundaries” with more creative and sometimes wacky flavors.

A popular stabilizer used in ice cream is the egg yolk. It is an excellent natural ingredient that helps improve the structure of the ice cream. Adding eggs results in a denser texture and also provides a slightly eggy taste.

Most gelato recipes don’t use eggs. Other stabilizers such as cornstarch are the preferred choice. Without eggs, the other ingredients are more pronounced – fruit, spices, and chocolate take center stage.

Ice cream is stored and served at a lower temperature than gelato. Usually, ice cream is kept frozen at 0°F while gelato is a warmer 15°F. The warmer gelato has a softer texture as it has slightly melted. You’ll also notice that gelato has a more intense flavor. That’s because the colder food gets, the less impact the flavor has. A vibrant mango or strawberry gelato will provide more flavor than the same version of ice cream. 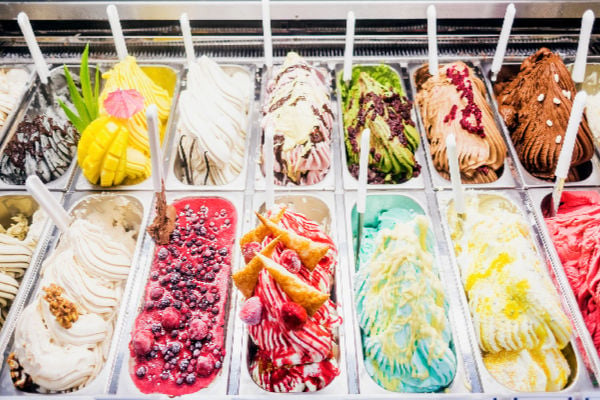 Whether you choose ice cream or gelato, you’ll find they both are high in sugar. The recipe choice will impact the nutritional content of the dessert. Generally, gelato will have less fat than ice cream as it doesn’t include cream. You should expect 4-8% fat content in gelato, while ice cream must have at least 10% in the United States. Premium brands will have 16% or higher.

Although there isn’t 100% certainty, it is believed that gelato was invented by an Italian, Bernardo Buontalenti, in the late 1600s. Ice cream was a much earlier creation. Back in 200BC, the Chinese combined rice and milk, then froze it with packed snow. This rudimentary form of ice cream would have had a much different taste and texture to the modern-day version.

Additional reading:
Would you like to learn how to make ice cream? Click the link to get an in-depth article that'll walk you through getting started.

There are subtle differences between the two everyday frozen treats, gelato and ice cream. Their flavor and texture vary thanks to the use of different ingredients, such as yolks. Ice cream uses them to provide a smoother texture, although the result is a subtle egg taste. The lack of cream in gelato makes for a silkier texture, and the flavors are given more opportunity to pop. The composition of ice cream tends to be lighter and airier as the churning speed is faster, allowing more air to be whipped into the mix.

Choosing a winner out of the two desserts is close to impossible as they are both delicious in their own way. Do you have a favorite out of the two? Let us know in the comments below.