Buttermilk is a popular ingredient in the kitchen, and for good reason. It has a flavor that lends itself well to baking, and also makes baked goods lighter in texture.

Although buttermilk is a fairly common ingredient, you may have dietary restrictions or simply don't want to buy a whole bottle for one recipe. Here are 10 different substitutes for buttermilk that you can use in all your favorite recipes.

What can I use to replace buttermilk in cooking?

To replace buttermilk in a recipe, your best option is to combine regular milk with lemon juice or vinegar. Mix one cup of milk with a tablespoon of acidic liquid for best results. Other types of milk such as lactose-free or almond milk can be used by those with special dietary requirements. 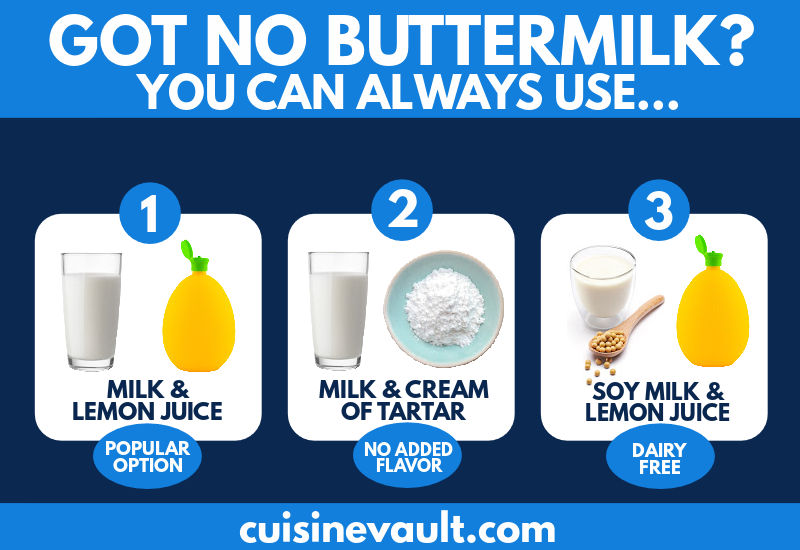 Adding lemon juice to regular milk is a great way to get that tangy flavor. Combine the juice of half a lemon with a cup of milk, then let the mixture sit for five minutes before using it. You can use freshly squeezed lemon juice or store-bought juice in the bottle.

This is an excellent combination for making baked goods like cookies, waffles, and brownies. Pancakes also turn out deliciously fluffy and light.

Use distilled white vinegar or apple cider vinegar to add acidity to milk. To make a buttermilk substitute, combine one tablespoon of vinegar with one cup of milk. Let the mixture stand for ten minutes before use.

Vinegar may separate from the milk after sitting in the fridge overnight, so be sure to give it a good shake before using it if that happens. Keep in mind that cider will give your baked goods extra tart flavor.

For those who are lactose intolerant, using lactose-free milk can help you avoid the sugars found in cow's milk. Simply mix a tablespoon of vinegar or lemon juice with your preferred milk and allow to sit for a few minutes.

You'll find lactose-free milk is a little sweeter than regular milk, so you might want to use a little less in your recipe or reduce the amount of sugar added.

4. Milk and cream of tartar

Adding cream of tartar, to milk is a great replacement option. Also known as potassium bitartrate, this pantry staple will help baked goods rise and also has a neutral flavor.

Use this combination for making pancakes, fried chicken, cakes, and much more. It is the perfect option for creating light and airy hamburger buns without adding any unwanted extra flavors.

For every cup of milk, use 1¾ tablespoons of cream of tartar. Mix well and let sit for five minutes before adding to the batter. People find that cream of tartar tends to clump when mixed with milk. To avoid this try whisking the cream of tartar with a little bit of the milk before mixing it into the remaining milk.

Like vinegar, cream of tartar can separate overnight in your fridge so give it a good shake before using if that happens.

5. Plain yogurt and water or milk

Plain yogurt has a similar acidity to buttermilk which makes it a great substitute. Add yogurt in equal proportions to the milk called for if it's a recipe like soup or mashed potatoes. The result will be a delicious creamy texture.

For recipes like cakes and bread which require batter with a thin consistency, we suggest whisking ¼ cup water into ¾ cup plain yogurt.

6. Sour cream and water or milk

Sour cream is another tangy ingredient that is made by adding bacteria to cream. To make one cup of buttermilk replacer, whisk ¼ cup of milk or water with ¾ cup sour cream.

Plain kefir is a type of fermented milk drink that is a great substitute for buttermilk. Its flavor is best described as similar to that of yogurt. 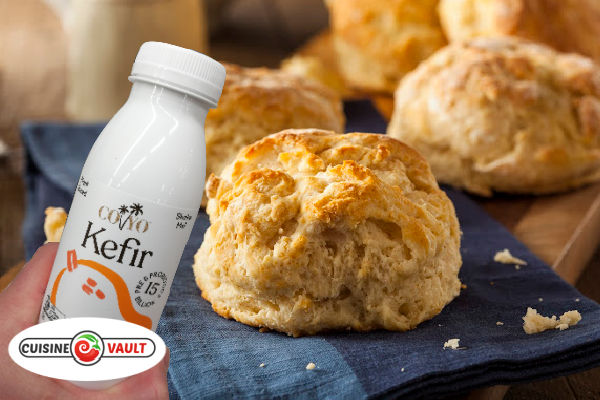 To make one cup of buttermilk, use kefir in equal amounts as the amount called for in the recipe. To offset the tang, you can mix in a little extra honey or sugar.

Soy milk is a great backup option for regular buttermilk if you're vegan or on a dairy-free diet. To make one cup of buttermilk, mix a cup of soy milk with a tablespoon of lemon juice or apple cider vinegar.

Tofu is a type of food made from soybeans, and it is a great substitute for buttermilk in vegan recipes. To replace a cup of buttermilk, use a blender to combine a quarter cup of silken tofu, half a cup of water, and a tablespoon of white vinegar or lemon juice. Don’t add all the water in one go as it could become too watery. Instead, slowly add the liquid until you’ve achieved a consistency similar to buttermilk.

A mix of coconut milk and an acid will make a useful alternative for those on a low-carb diet. To make one cup of buttermilk, use a blender to combine a tablespoon of acidic liquid like lemon juice or vinegar with a cup of coconut milk.

Coconut milk will provide a similar texture to buttermilk, but keep in mind your food will have a subtle coconut flavor. In some recipes, this may improve the final result!

If you don't enjoy the taste of coconut milk you can also use another vegan alternative like almond, oat, or rice milk.

Quick tip: If a recipe calls for buttermilk then it isn't a good option to replace with regular milk. The milk's acidity has a range of uses in cooking and could affect the final result of your food.

The buttermilk sold in stores is a slightly sour milk that is thicker in consistency than regular dairy milk. Originally, buttermilk was the liquid byproduct of butter making, but it is now made in commercial quantities by culturing milk. Lactic acid produces the milk's tart flavor.

Why is Buttermilk Used in Baking

Related reading:
What is the best substitute for evaporated milk?
How long can cream cheese be stored?

Can You Freeze Buttermilk?

Buttermilk can be frozen as it contains an abundance of fat that can withstand freezing without separating. Store frozen for up to three months, but remember to tightly wrap and freeze the buttermilk containers to avoid odors from other foods.

It is a good idea to label your milk with the date and also freeze in portion size amounts so that you don't have to thaw it all in one go.

What happens if I use milk instead of buttermilk in cooking?

If you decide to use milk instead of buttermilk, you may still make a decent dish; however, the recipe's flavor and texture will be different. In baked goods, you won't get as much rise as if you used buttermilk.

Buttermilk isn't a huge challenge to find in stores, but you may not want to take a trip to the shops to get one ingredient. There are other reasons you may want a buttermilk substitute, such as needing a dairy-free option or lower-priced milk.

We've provided a good range of options above, but if you don't have any dietary restrictions then you are best to combine regular cow's milk with lemon juice or vinegar. These ingredients are likely to be in the kitchen already and they don't cost a lot.