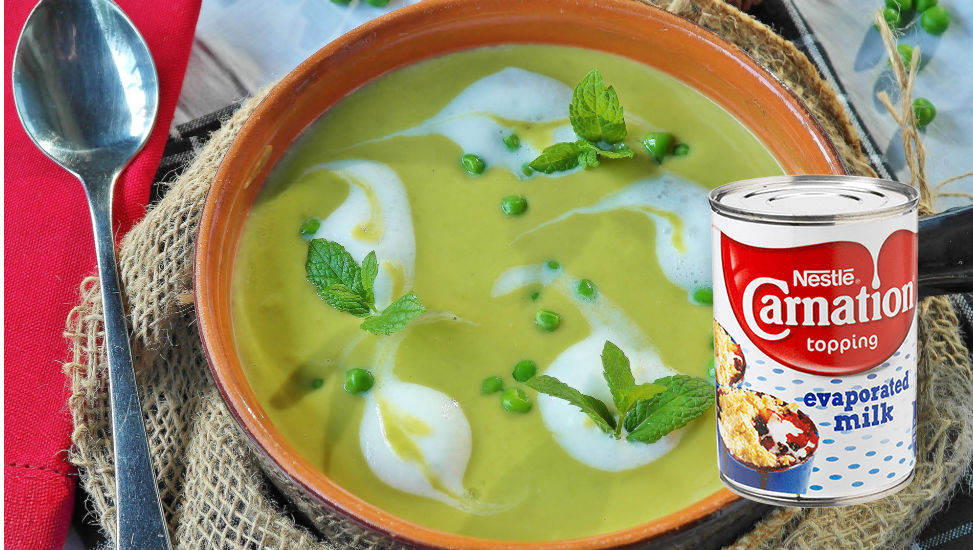 Evaporated milk is a versatile ingredient that is relatively low in fat and calories. It has a slightly sweet flavor with a mild caramel undertone. It is useful for making pasta sauces, pumpkin pie, soups, and for breading fish. But not everyone enjoys it, and occasionally you’ll find that you cant’ find a can in the pantry. If you need a substitute for evaporated milk in your next dish then keep reading. You’ll discover five excellent substitutes for evaporated milk that use everyday ingredients.

Let’s dive in and look at some excellent back-up options if evaporated milk isn’t your thing.

Best option: if you don’t have a can of evaporated milk in the cupboard and need a solution fast. 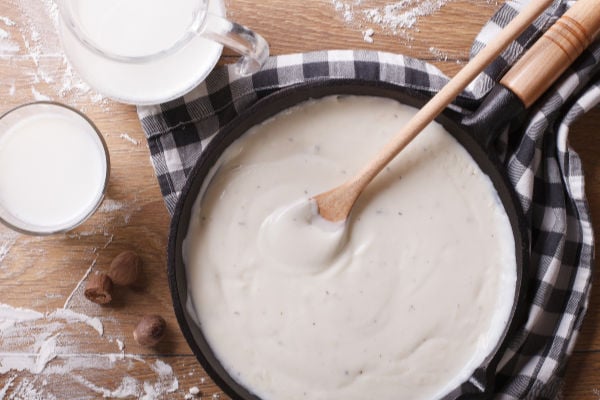 Make homemade evaporated milk by simmering whole milk in a saucepan on medium-low until it reduces by 60% in volume. For example, heat 2 cups of milk until it reduces to a little under 1 cup. The result is a thicker, off-white colored liquid that’s perfect for adding to hot beverages, mashed potatoes, soups, sauces and also baking.

In a hurry? Forget heating the milk and go for this method instead. Combine a ¼ cup of half-and-half with ¾ cup whole milk to create one cup of evaporated milk. It won’t look the same, but in most recipes for soups and sauces, it will work similarly.

Best option: to reduce the calories, carbs, and fat in your diet. 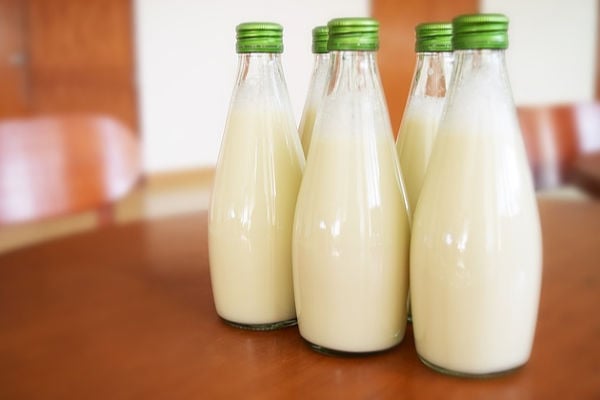 If you have a dash of evaporated milk in your coffee occasionally then using milk won’t make a huge difference to your diet. But if you regularly make sauces, smoothies, and baked goods with it, then milk may be a healthier alternative.

By substituting one cup of evaporated milk with whole milk, you’ll reduce fat intake by 9 grams, carbohydrates by 12 grams, and calories by 192. Every little bit helps on a weight-loss program, and in many cases the impact on the food’s flavor is undetectable

Quick tip:
When using milk for sauces and soups, add a tablespoon of cornflour to help thicken the texture.

Best option: to increase the creamy richness of the dish. 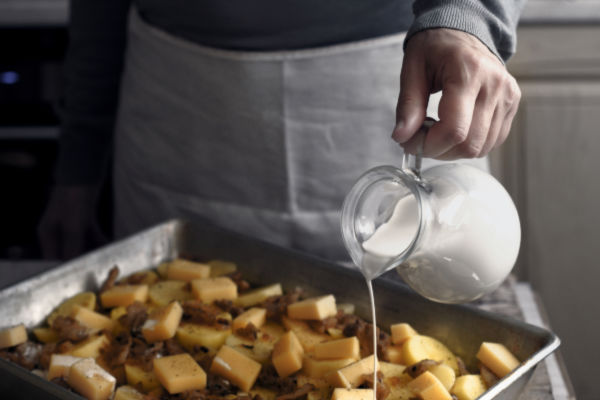 Evaporated milk is an excellent addition to many recipes in the kitchen. But if you want to create a creamier, richer dish then use cream instead. However, you’ll need to weigh up the health implications as cream dials up the fat content.

To substitute in cream you can use the same ratios. If the recipe calls for ½ cup of condensed milk, use ½ cup cream instead.

Best option: if you need a versatile non-dairy replacement 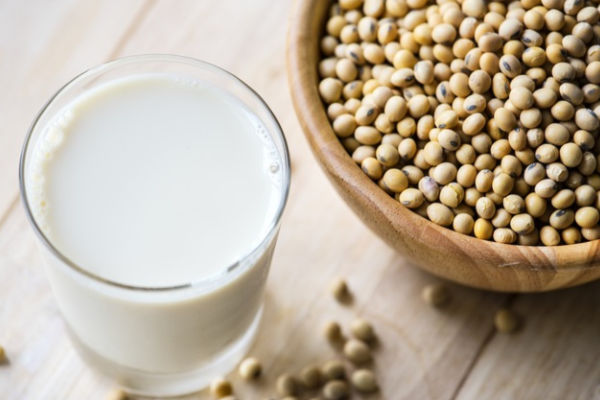 Soy is a useful dairy-free option.

Soy milk is a good option if you’re on a diet that excludes dairy. It is made from filtering soybeans soaked in water. The nutritional values of soy milk is similar to evaporated milk.

To achieve a suitable consistency, simmer the milk until its water content has reduced, leaving a thicker liquid to cook with.

Soy milk offers a unique flavor that you won’t get from evaporated milk. Choose dishes that have strong flavors, such as curries, to overwhelm the soy taste. This type of milk isn’t recommended for dishes like custard unless you really enjoy the flavor of soy.

Best option: Use in recipes that are lifted by the flavor of coconut. 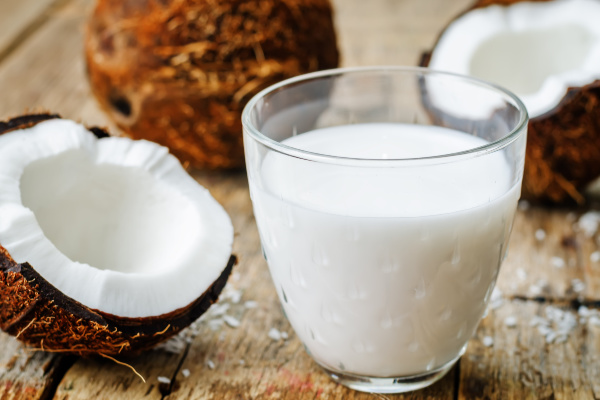 Coconut milk adds extra flavor which can improve some dishes.

Coconut milk is commonly used in Asian, Caribbean, and South American cooking. The milk is made from fresh coconut flesh and has a distinct coconut flavor. This option won’t be suitable for some dishes such as French onions soup or for adding to coffee. However, dishes that are complemented by the taste of coconut will benefit from this option.

Coconut milk is a good substitute for evaporated milk because it has a similar consistency. Use a ratio of 1:1 in recipes.

Related reading:
10 coconut extract substitutes you need to know.
8 handy alternatives to capers.
Best cardamom substitutes all on one page.

4 reasons you may need an alternative to evaporated milk

Need an evaporated milk substitute? Watch the video below.

What to consider when choosing an alternative milk

No-one enjoys a funky, unexpected flavor when they’re eating so be careful when substituting milk. Non-dairy milk substitutes all have unique flavors which can easily lift or ruin a meal. Coconut milk is especially strong and can spoil a dish, just as easily as it can improve it.

Always check food labeling before buying a milk substitute as they often contain allergens such as soy or nuts.

Different milk types behave in unique ways when heated. Trial and error will help develop your cooking skills. If you’re cooking for special guests who can’t eat evaporated milk, you may want to test the amended recipe ahead of time to make sure the back-up option works.

If you’re trying to lose weight then check the nutritional panel closely as the fat content and calories vary significantly depending on the milk type. Coconut milk is especially high in fat and calories. 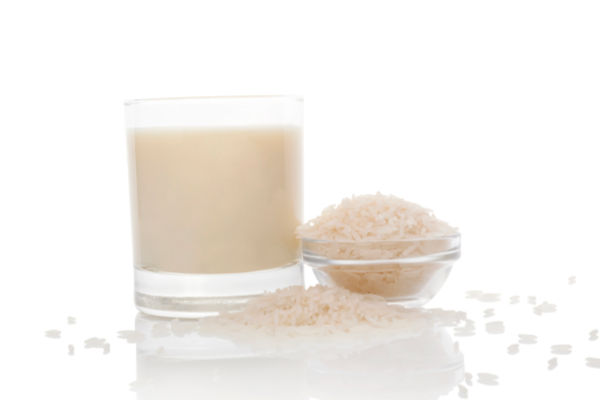 How is evaporated milk made?

To make evaporated milk, whole milk is heated until 60% of the water is removed. The result is a thicker, off-white colored liquid that’s perfect for adding to hot beverages, mashed potatoes, soups, sauces, and also baking.

What’s the difference between evaporated milk and regular milk?

Evaporated milk is regular milk that has been heated until its water content is reduced by 60%. It is thicker and slightly darker in color with a faint taste of sweet caramel.

Can I substitute sweetened condensed milk for evaporated milk?

Sweetened condensed milk is a lot sweeter than evaporated milk so they shouldn’t be used interchangeably.

Can I substitute heavy cream for evaporated milk?

Heavy cream is a good option for replacing evaporated milk if you enjoy dishes that are rich and creamy.

How many cups in a 12 oz can of evaporated milk?

Finding an evaporated milk substitute for your next recipe is easy, but it is important to understand why you need one. If you need a replacement because there are no cans left in the cupboard, then simply make your own by reducing regular milk in the saucepan. Not everyone enjoys the flavor of evaporated milk, and others can’t eat it for dietary reasons. Whatever the reason, we’ve provided a range of options to help you finish that recipe.

Do you have a useful substitute that we haven’t mentioned? Please leave a comment below – we’d love to test it out!