Everybody knows all-star cuts like the ribeye and New York Strip, but it's easy to forget that they're not the only beef cuts worth serving on your dinner table. In fact, the round primal contains some of the most delicious and versatile meat, as long as you know how to prepare it. But first, it's important to learn the difference between the cuts that come from the round. 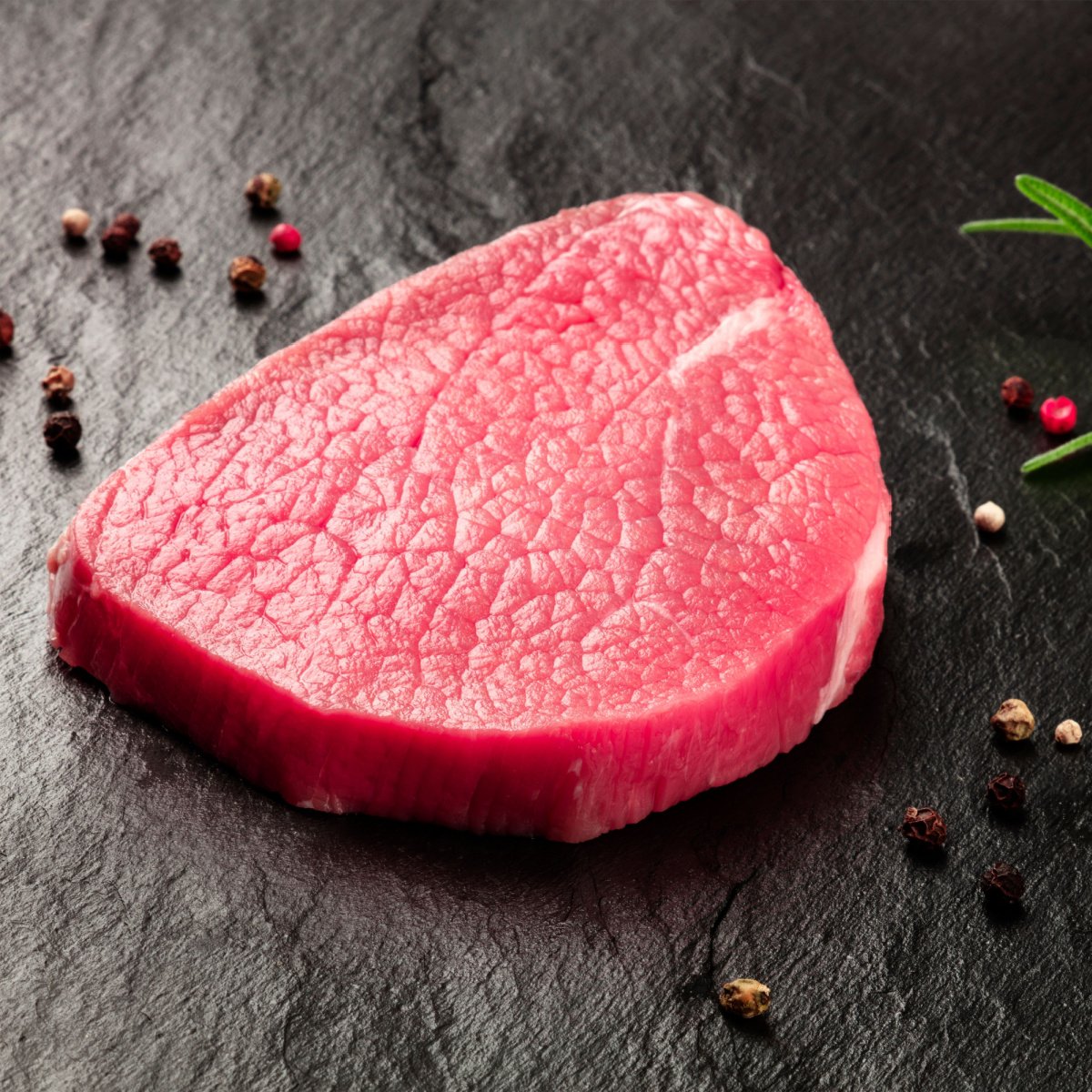 Are you thinking of preparing a round steak or roast? Make sure to learn everything you need to know about the appearance, flavor, tenderness, cost, and preparation below.

What is Eye of Round?

The round eye is a cut made from the round primal, which is located at the back of the cow. It's located at the center of the primal and has a large bone running through the middle, which is where it gets its name. While it isn't the most popular item on steakhouse menus, with the right preparation, it can make a hearty meal.

Because the eye of round is so thin, there is no visible marbling across the cut, but instead a consistent pink or red color across the entire surface. It's often used as roast beef when it takes on a darker color, sometimes completely brown. It has some exterior fat on the side of the cut, usually a strip about a quarter of an inch thick.

Since the eye of round is lean, it has a relatively mild flavor compared to other cuts of beef. This is one of the reasons why it is so frequently marinated. When the cut is served as roast beef, pepper is often rubbed on the outside to make it taste better.

The muscles on the cow's hind leg get plenty of exercise, which is why cuts from the round primal are so lean and somewhat tough. While not quite as tough as the large-grained skirt steak, it is still usually prepared with a marinade or ground to help make it more tender. The eye of round, on the other hand, has a relatively tight grain, which gives it a smooth texture but makes it a little chewier.

Compared to most other cuts of steak, the eye of round is much cheaper. On average, you can expect a steak to cost $5.26 and a roast to cost $5.66 per pound. While this is slightly more expensive than the top round and bottom round cuts, it is much more affordable than the most popular steakhouse cuts, which tend to be closer to $10 or $15 per pound.

When cooking an eye of round steak, a marinade is almost mandatory. The reason is that the meat is relatively mild as well as tough. By soaking it in a citrus- or soy-based marinade, it can become much easier to eat and benefit from an enhanced flavor.

An eye of round roast is more common, as it allows for a longer cooking time. This breaks down the muscle fibers and makes the meat more tender. It also lets you add flavor in more creative ways, like by adding pepper, garlic, and other aromatics.

What is Top of Round?

Also called the "inside round," the "top round" is another cut that comes from the round primal. It is generally more tender and flavorful, as well as more expensive.

The top of the round is cut in a more oval shape and has little fat marbling. Even though it is pretty lean, it is different from the top of the round because it has a bit more fat. It is also tight-grained and often has a thin strip of fat running along the upper edge.

Despite the fact that the top of the round lacks the fat marbling of more popular cuts, many consider it the most flavorful part of the round primal. It has a bit more fat than the eye of round, which gives it a slightly richer flavor and more tenderness.

While the top round is more tender than the other round cuts, it can still turn out tough if not prepared correctly. However, it can still be grilled as long as it's cooked with care. To ensure it is maximally tender, cook it medium-rare and slice it against the grain thinly.

When it comes to affordability, the top round is a mid-range cut. It comes at a price similar to the eye of round, though you can expect the steaks to be a little bit more expensive at $5.56 per pound on average and the roasts to be a bit more affordable at $5.01 per pound. Overall, it's one of the best value cuts on the round primal because of the top round's better flavor and tenderness.

One of the most common places to find top round is sliced roast beef at the deli. The lean marbling and pronounced flavor make it an ideal choice for sandwiches. It's also the steak used for London broil, which is a thick cut meant for roasting or grilling. It can also be braised, which ensures it retains its juices and keeps from drying out.

Make sure to check the freshness of your steak before cooking it. Find out how to tell if your steak is fresh here.

What is Bottom of Round?

The bottom round is a cut from the rib primal that comes from the outside of the muscle. While more tough than the other two cuts, it can be a great option for slow-cooking methods or for ground beef.

The bottom round is a little bit smaller than the top round, and its texture is a little bit rougher. While not especially fatty, it does have a stripe of fat that runs down the middle of the cut, as well as a thin layer that coats the bottom.

Like the other cuts from the round primal, it's relatively mild. However, a slow cooking process can help bring out the natural flavors in its fat. With the right preparation, the intensity of its beef flavor can rival more popular cuts like the strip or ribeye.

Bottom of round is tougher than the other two cuts, which means it isn't the ideal choice for traditional cooking methods. However, with the right tenderization process, it has a nice, firm bite and an enjoyable texture.

While it may take a bit of extra work to prepare correctly, the bottom of round is actually one of the more affordable cuts of beef. It's just $4.57 per pound for steaks and $4.63 per pound for roasts.

The most popular way to enjoy the bottom of round is to stew or braise it. These slow-cooking methods will help break down the muscle and fat in the cut to make it more tender and develop the flavor. If you want to cook it on the stove or grill, marinating and tenderizing it is crucial; otherwise, it will be too chewy to enjoy.

Eye of Round vs Top Round

Overall, cuts from the round primal are going to be a bit milder and a bit tougher. While they can all be slow-cooked to perfection, the eye of round and top of round have a little more versatility. Either of them can make good steaks for grilling, as long as you tenderize and marinate them.

Between the two, you can expect the top round to be both more flavorful and more tender. That's because the top round comes from the inside of the cow's leg, which gets less exercise and has more marbling. Of course, the steaks tend to be a bit more expensive per pound as well.

The main advantage of the eye of round is that it sometimes comes with a bone. This can add flavor when stewing or braising, which is much appreciated given the cut's leanness.

Practically speaking, you can use both of these cuts more or less interchangeably. Don't be afraid to substitute one for the other in any recipe.

Bottom Round vs Eye of Round

While the eye of round is versatile enough for a variety of cooking methods, the bottom round is really best suited to slow cooking methods. Both braising and stewing are good ways to give the cut the tenderness it needs while developing its otherwise mild flavor.

It might seem like the bottom round is a cut that you're better off avoiding, but that's not true at all. In the right dish, it can be a perfect choice. Corned beef most often comes from the eye of round, where the firmness of the meat gives the dish a distinctive character. You can also use bottom round for sandwiches, where the extra-thin cuts benefit from a tougher consistency.

Top Round vs Bottom Round

These two cuts have the starkest contrast found in the round primal. Both are relatively lean and tough, though the top round is more tender and fatty compared to the bottom round. As you might expect, each one calls for a slightly different preparation.

The top round is more versatile and can make a good pot roast or grilling steak. Just keep in mind that, to enjoy it fully, it needs to be marinated, tenderized, and cut across the grain. When you do, you can get a flavorful meal at a much lower cost than premium beef.

On the other hand, the bottom of round is best reserved for slow cooking. In this area, it's actually superior to the top round, as the extra fat and muscle fiber will deepen the flavor of your stew as it cooks.