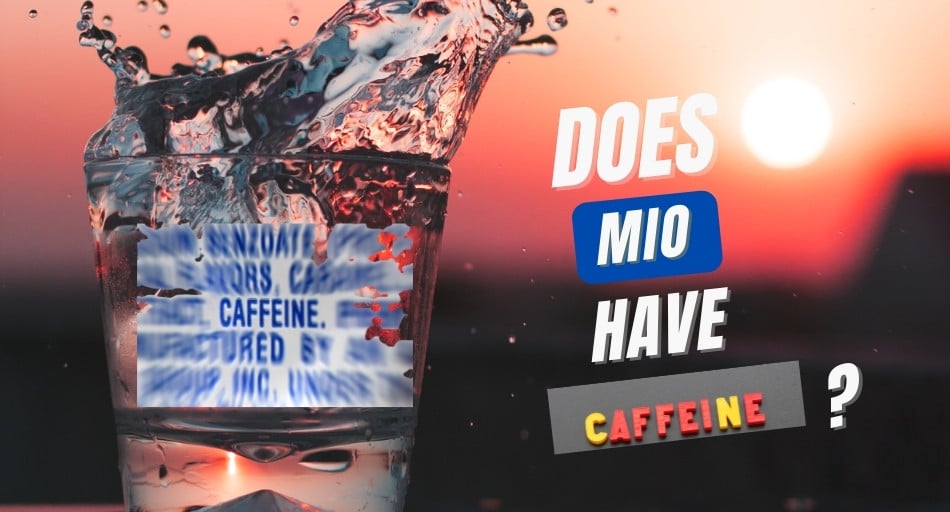 Drinking enough water is very important for everyone. Unfortunately, most people struggle with that, and they need some help. In those cases, many products add flavor to your water, making it easier to drink.

MiO products help add flavor to your water without any additional calories. However, some of these products tend to contain caffeine, which is something not everyone wants. So, does MiO have caffeine?

Does MiO have caffeine?

Most MiO products don’t contain caffeine but only artificial sweeteners and some B vitamins. But there’s one MiO product line called MiO Energy, which contains caffeine. Because of that, these products are the best for people looking to up their intake of water while increasing their focus and energy throughout the day.

How much caffeine does MiO Energy have?

Because of that, make sure not to overdo it, especially before going to bed, as the caffeine in MiO can influence how well and if you sleep.

These ingredients have antioxidant properties and can help improve your focus and stimulate your nervous system. So, drinking water infused with MiO can be really good for you when you’re lacking energy in the middle of the day.

Is MiO good for you?

All MiO products contain zero calories and carbohydrates. They’re based on artificial sweeteners like sucralose, Ace-K, and stevia leaf extracts. Because of that, they’re able to provide you with a lot of flavors without adding any unnecessary calories.

You can drink MiO-infused water even if you’re trying to lose weight. Aside from not containing any calories, MiO can help you get enough water each day, which is incredibly important for healthy weight loss.

MiO products contain several B vitamins, such as niacin, vitamin B6, and vitamin B12. These can help you stay healthy and prevent various health conditions. B vitamins also help enzymes in your body do their jobs and contribute to a wide range of cellular functions.

Some of these functions include breaking down carbohydrates and transporting nutrients throughout your body. What’s more, taking in enough vitamins can improve your cognitive function and keep your brain healthy. A single serving of MiO provides you with 10% of your daily recommended need for each of these three vitamins, helping you reach your macronutrient goal.

Some MiO products are made with stevia leaf extracts, which have some potential health benefits. For example, stevia extracts help curb your appetite without increasing post-meal blood sugar levels.

What’s more, some studies show that stevia extracts can help lower your blood sugar levels and prevent cavities, which is a great benefit, especially for people consuming a lot of sugary drinks. So, replacing table sugar with stevia extracts and sweeteners can help you avoid these health issues.

On the other hand, it’s important to remember that artificial sweeteners that MiO is based on are still considered bad for your health. So, keep that in mind when you decide to include this water-enhancer in your diet.

While most people should be perfectly fine with consuming MiO regularly, those especially sensitive to artificial sweeteners and preservatives should limit their consumption of MiO.

Also, in terms of MiO Energy, make sure not to drink too much of it if you also drink coffee, energy drinks, or tea every day. This is because all of these contain caffeine, which isn’t too good for you if you consume too much of it at once.

According to experts, it’s best to go for up to 400 mg of caffeine a day. So, even a couple of servings of MiO Energy in combination with tea and coffee can take you above this level. So, be careful not to overdo it.

Is MiO Energy more energizing than coffee or tea?

A single serving of MiO Energy provides you with around 60 mg of caffeine. This makes it slightly weaker than brewed coffee but stronger than black tea. On the other hand, an energy shot can have as much as 215 mg of caffeine, so keep that in mind when choosing your caffeine source.

What’s more, how much caffeine you’re getting from MiO depends on whether you follow the serving sizes. For example, if you add more, you can get even twice as much caffeine. So, be careful when dosing, especially if you’re sensitive to caffeine.

Most people are fearful of drinking beverages containing caffeine because they think it might raise their blood pressure. According to studies, drinking caffeine may raise your blood pressure but only temporarily and mostly in people with hypertension.

Other studies also show that drinking moderate amounts of caffeinated beverages doesn’t increase your risk of various cardiovascular conditions, such as coronary disease, heart failure, and arrhythmias. So, if you drink coffee or caffeinated beverages every day, you shouldn’t worry about high blood pressure that can threaten your life.

On the other hand, drinking caffeinated beverages has been proven to lower your risk of certain health conditions, including type 2 diabetes.

In fact, getting your caffeine without added sugar keeps your blood sugar levels in check without negatively impacting your energy levels. So, if you drink coffee and are genetically prone to diabetes, you might be unknowingly improving your health.

The majority of MiO products don’t contain caffeine. So, if you want to drink it without ingesting caffeine, you can safely do so.

On the other hand, if you do want to up your water intake but add some energy to it, there are some MiO products containing caffeine. So, whether you do or don’t want to consume caffeine, there’s a MiO product for you in various flavors.