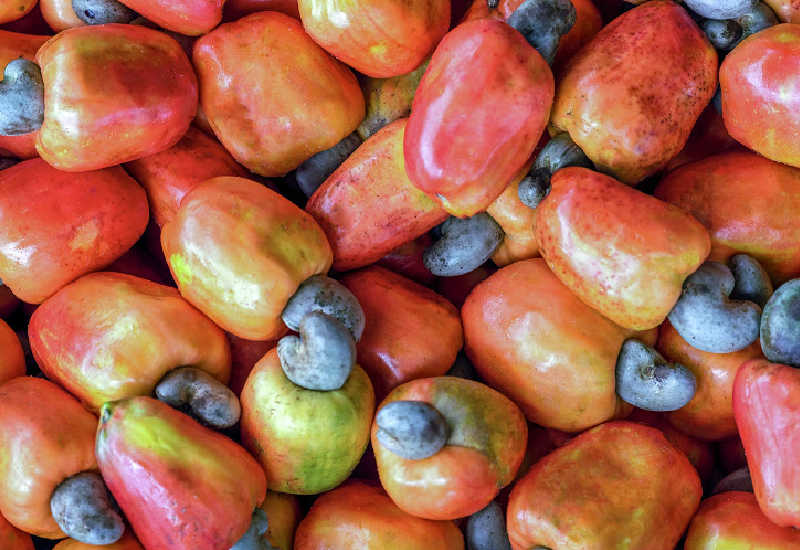 If you enjoy nuts, there’s a good chance you're familiar with cashews. But did you know that they come from a type of fruit known as the cashew apple? Revered by the Brazilians but not so popular in the rest of the world, you may be wondering what cashew apples taste like? We’re about to cover their flavor, texture, and uses in the kitchen.

A cashew apple is sweet and astringent with is a complex melange of additional flavors. The yellow flesh combines hints of strawberry, mango, cucumber, cashew nuts, and bell peppers with a tropical, fruity aroma. Cashew apples have a unique spongy, creamy texture that is also fibrous and juicy. Although there doesn't appear to be a lot of juice, as you begin chewing the pulp, the texture turns waterier. This is something that we also found in the ice cream bean.

Cashew apples have a thin waxy skin that is smooth and ranges from golden yellow to red once ripe. Each fruit is attached to two shells that encase green, kidney-shaped seeds. These are the raw cashew nuts and should be treated with care. Within the shell is a substance that can cause severe allergies. We suggest avoiding this section of the plant if you are inexperienced in handling them. 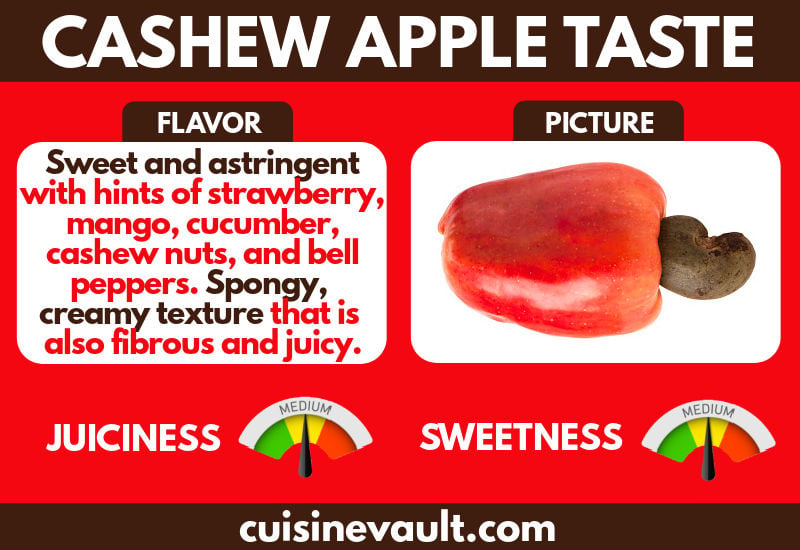 Although the cashew apple can be eaten raw, many people find the acidic, astringency of the juice unpleasant. However, if you enjoy strong flavors then slice the fruit into thin pieces to make the stringy texture more palatable. Brazilian locals will often sprinkle salt on each slice to help balance out the bitteress.

Other uses for the fruit in cooking

Do cashew apples taste any good?

As with any food, personal preferences play a key role as to whether you'll enjoy it or not. People that don't enjoy eating food “outside their comfort zone” will be highly unlikely to enjoy the cashew apple. Most children probably won't enjoy it either. But those that enjoy variety when it comes to flavor, especially those that appreciate astringent, tannin-riddled foods, are likely to enjoy this fruit. Mixologists may love this fruit for cocktails, balanced out by a sweet mixer or apple juice.

Keep in mind that cashew apples are an acquired taste. It isn’t uncommon for “first-timers” to dislike the fruit, but the flavor grows on them over time.

Combining cashew apple with other sweet ingredients will help offset the flavor. In smoothies, add other tropical fruit like banana and pineapple to dial up the sweetness.

The cashew fruit is an excellent source of magnesium and also contains useful levels of potassium, iron, and copper. It is good for assisting digestion and provides useful levels of fiber. The fruit has around 250mg of vitamin C in half a cup of juice.

The cashew apple is one of the lesser-known fruits in countries outside Brazil. It has an astringent, sweet flavor that combines a combination of tropical fruits and a hint of bell pepper in its flavor notes. The texture is stringy and juicy.

If you can get past the astringency of this fruit then it's likely you'll quite enjoy it. Alternatively, people that prefer simple flavors will do well to give this fruit a pass.

Are you looking to grow a cashew apple tree or have you seen the fruits for sale near where you live? Please let us know in the comments below.