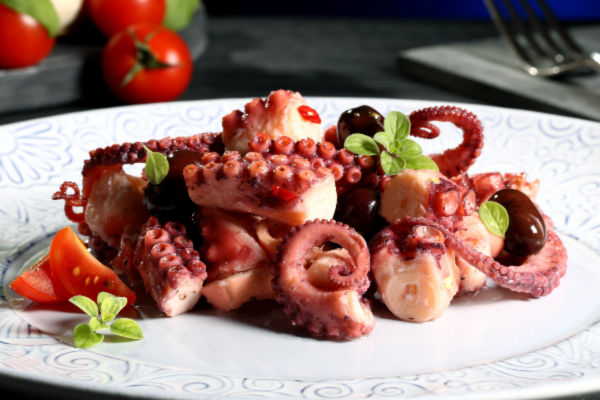 If you’re looking to try octopus for the first time you may be wondering what does octopus taste like? We’ll answer this question next and then follow up with how to cook this sea creature, in case you’re considering serving it at home.

Before we start let’s get two myths out of the way.

Okay, now that I’ve got that off my chest it’s time to take a close look at the octopus.

Octopus has a bland taste and a very low “fishiness factor” compared to other seafood. It has virtually no aroma and a soft, crayfish like texture when cooked correctly. If it is slightly overcooked the texture transforms into a chewy, rubbery texture.

Octopus is often compared to squid but the two are different. The texture of octopus is tenderer than squid and its flavor is more subtle; it has a slightly nutty and sweet taste. 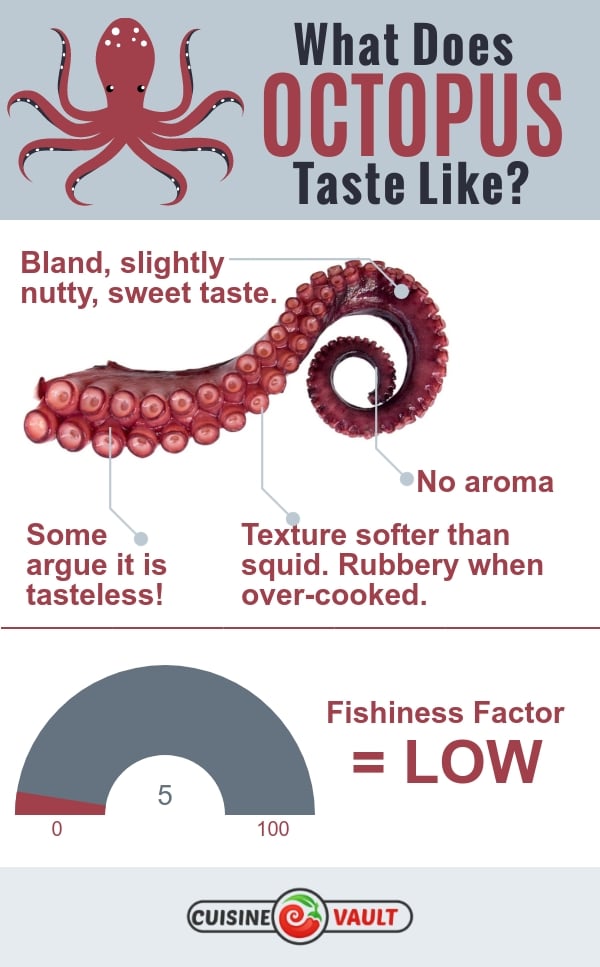 Octopus doesn't have the fishy flavor that most seafood has.

Octopus ink has a unique rich flavor with an underlying hint of the sea. It is best combined with other ingredients to add umami and a well-rounded briny flavor. The true benefit of using octopus ink comes from its appearance on the plate. Chefs love this ingredient for coloring pasta, sauces and for adding a garnish to the plate.

Related reading:
A comparison of ssamjang and gochujang - two Korean sauces perfect for dipping octopus into.
What does uni taste like? AKA sea urchin.

The challenges of this seafood

Cooking octopus correctly isn’t easy. If you leave steak or chicken on the heat for a little too long it isn’t a big issue but octopus offers no room for error. A few seconds too long and the texture quickly turns to rubber. Are you looking to cook this protein in your next dish? Use a timer set so that you don’t overcook it.

If you buy octopus from the store frozen then you’ll find there is minimal preparation required. Allow it to thaw overnight in the fridge. When it comes to cooking your only decision will be whether to cook it whole or slice into pieces. If your octopus is small then cooking it whole is a good option; however, a larger octopus is best sliced up to ensure even cooking. We don't recommend eating the beak and internal organs.

If you have caught octopus or bought some fresh from a local market then you’ll need to remove the internal organs. It’s best to do this in the sink as it can get a little messy.

My preferred method is to slice off the head then flip it upside down and look for the inedible beak which is located centrally, between the arms. It’s easy to spot and looks a lot like the beak of a bird. Cut around the beak with a sharp knife and push it out with your thumb.

To remove the “insides” turn the octopus bag inside out and scrape out the white insides with a paring knife or your fingers.

Can you eat the head of an octopus?

The thought of eating octopus head is a scary thought for some. In fact, the head is perfectly edible and tastes similar to the rest of the body (it is thinner than the arms so there is a little less taste). If you’re dealing with a large octopus over 2 pounds then slice the head before cooking. Otherwise parts of it will become rubbery before the rest has had time to cook.

We are constantly told on cooking shows that fresh is best but this isn’t always the case. A frozen octopus, due to the freeze/thaw process, will usually provide a more tender meat than buying fresh.

Tip: Buy more octopus than you think you’ll eat. Three pounds of octo-meat may sound a lot but it reduces down to enough for roughly four appetizers or small mains.

Octopus is a versatile ingredient that can be cooked using a range of methods: raw, sushi, steamed, seared, grilled, fried. If you decide to cook a large octopus then add it to a shallow pan and simmer with no oil, butter or water added. As soon as it becomes tender slice it up and briefly fry in an oiled pan.

To cook a small octopus you can toss the whole specimen into a very hot pan and fry until it's nicely charred on the outside and tender inside.

The Greeks beat the meat over a rock to help break up the protein; this produces a similar result to using a meat cleaver. Smacking the octopus or slapping against a rock tenderizes it nicely.

Italians add a wine cork to the pot when slow cooking octopus for delectable tender meat. 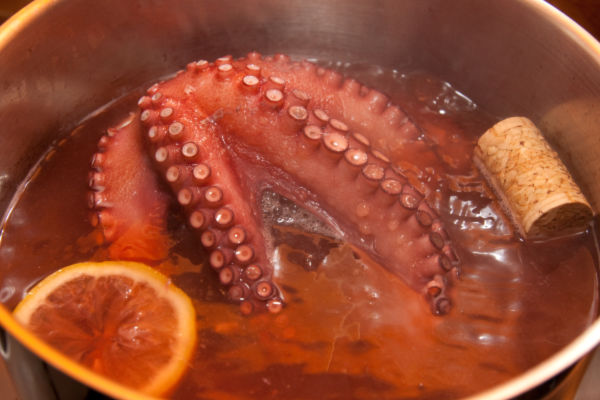 Slow cooking with a wine bottle cork improves the texture.

The Japanese eat octopus raw by massaging it with salt and bashing with daikon radish.

Before cooking, dip the arms in hot water so that they curl up. It won’t improve the taste but they will look elegant on the plate.

Avoid using salt when cooking octopus as it already has a lot absorbed into its flesh. Salt causes the meat to reduce in volume when cooked so you won’t want to add any extra.

Popular dishes from around the world

Japanese and Korean cuisine is known for serving up raw octopus that’s so fresh it’s still wriggling on the plate. This snack makes for an “interesting” meal as the suckers are known to occasionally suck on to your insides as they begin the digestion process.

Other common dishes that incorporate octopus include: 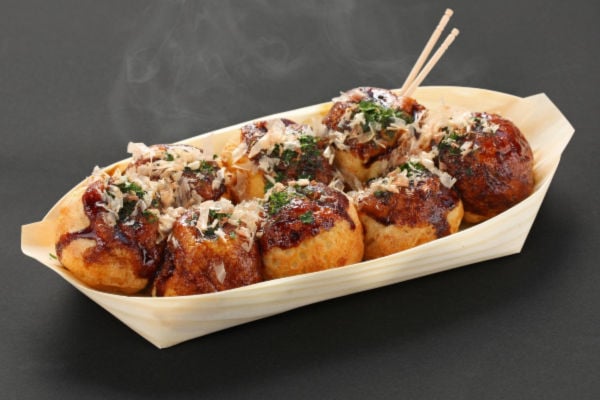 Takoyaki is hugely popular in Japan.

The Japanese commonly use raw octopus, or taco, in sushi.

A specialty dish originating in Portugal, the octopus is stewed with rice or roasted with vegetables, garlic and oil. Grilled octopus is popular all over the world.

The chargrill method is popular all over the globe. It's especially popular in Greece served in a salad.

Can you eat octopus suction cups?

The suction cups of an octopus are perfectly edible and should not be removed before cooking the arms. They also add an interesting visual appeal to the dish and are good for soaking up flavor from other ingredients.

Raw octopus, or sannakji in Korea, has a very mild taste of the sea and is chewier than the cooked version. The pieces are wriggly even though the octopus is no longer alive. It is chopped into pieces and topped with sesame oil and sesame seeds. As with many dishes in Korea, a side of Gochujang dipping sauce finishes off the meal.

Octopus is a fairly bland tasting seafood that even fussy eaters shouldn't have a problem dealing with. You certainly won't get hit with an overly fishy taste.

The appearance of octopus is usually the biggest obstacle for most newcomers to this seafood. Slimy looking suckers and creepy arms, known to many as tentacles, can be off-putting. Put the visual cues aside and give it a try - that's my advice.

How octopus is cooked and what it's served with will play a big role in your enjoyment levels. Slightly over cooked meat will be tough and unpleasant. So if you're going to try it for the first time I recommend buying it from a restaurant that specializes in cooking seafood dishes.