The main difference between ube and taro is that ube has a rich, sweet flavor, while taro tastes earthy, slightly nutty, and a lot less sweet. You can also tell them apart by their color when sliced; ube has a purple hue, while taro has white flesh with specks of purple. 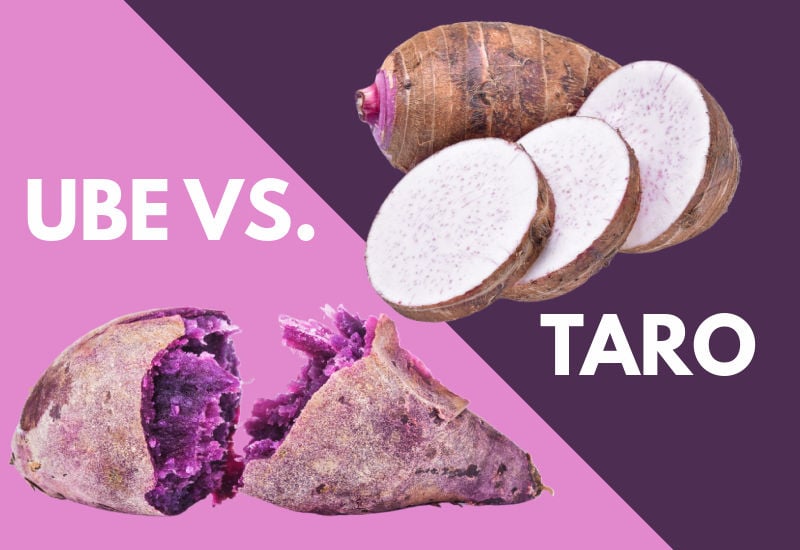 The ube and taro are both tubers that have a similar appearance and share many uses in the kitchen. They often get mixed up, but there are some noticeable differences so they shouldn’t be used interchangeably in cooking. In this article, we’ll take a close look at the taro and ube to find out what sets them apart.

What is the difference between the ube and taro?

The ube, or purple yam, ranges in color from white to purple and is usually sweet, making it perfect for sweet dishes like ice cream, cookies, cakes, and jam. It is also used for savory purposes such as roast vegetables or ube puree. The taro has a white or pale lavender color with a blander flavor that is much less sweet. It is best used in savory meals although it is a key ingredient in taro coconut tapioca dessert and makes a great smoothie.

Ube vs taro – a detailed comparison

Ube
The ube can easily be distinguished from a yam due to its color, which is usually an intense saturated purple. When cooked or processed into baked goods and other desserts its color intensifies. Food photographers, bakers, and café owners love using this vegetable in recipes to make vibrant food that looks irresistible.

Taro
Taro has a lighter, often white shade of flesh when it is pulled from the soil. Once grated, blended, or chopped up, it will often transform into a light purple color. Although taro lacks the vibrancy of an ube, this is seen as a positive by food sellers in the Philippines and other tropical countries, who market the taro as a "healthier flavor" in sweet treats like slushies and ice cream.

Ube
The ube originated from Southeast Asia and has existed since ancient times. It is now an essential food source for the Philippines, used in a wide variety of dishes. The ube is also grown in parts of Africa, South America, Australia, and the United States.

Taro
Taros originated from Southeast Asia and India and are believed to be one of the earliest crops to be harvested domestically. Today, the vegetable has become a staple food in Hawaii, the Caribbean, the South Pacific, China, Southeast Asia, and Africa. The Japanese also grow multiple varieties of this crop and use it in many recipes.

Ube
An ube has a mellow taste that is mostly sweet and rich; although it has a starchy feel to it, it certainly isn’t as easily added to savory food as a taro is. Once cooked, the ube has soft, slightly sticky texture that is moist and easy to eat.

Taro
Taro is a starchy vegetable with an earthy, slightly nutty taste. If you’ve ever tasted a sweet potato then you’ll have a good idea of what it tastes like. The texture of a taro once cooked is soft, dry, and a little grainy.

Ube
In Filipino cuisine, the ube is used in many desserts. Its sweet, subtle flavor makes it compatible for use with dominant, sharper tasting ingredients like cheddar cheese. Ube cheese pandesal is a soft and fluffy bread roll filled with cheese. The sweet and salty flavors make a delicious combination. Ube is also well-matched with pandan, coconut, cream cheese, and even mung beans!

Taro
Taros have less sweetness but a more pronounced nutty flavor with a vanilla undertone. Although they are suitable for some desserts, they're more commonly used for savory cooking. Taro works well roasted and served with meat, chicken, or fish. They are also a good size for baking, then stuffing with ground meat, pulled pork, spices, and other diced vegetables. Asian flavors like matcha, black sesame, and red beans all compliment taro well.

Ube
Use an ube predominantly in dessert recipes to add color and sweetness, with a subtle tropical feel. Pastries and fried desserts are taken to a delicious new level with ube paste piped into them. Cupcakes, bread, pies, puddings, and drinks all benefit from the addition of ube. The root can be used in savory food but keep in mind that it is very sweet and will taste out of place in some foods.

Taro
Taro is much less sweet, making it the more versatile option in the kitchen. Although it is popularly cooked as a side dish, it can also be added to curries, soups, and casseroles. In desserts, it can be processed into a paste and used as a filling in dumplings and buns. Taro makes lovely ice cream and is useful for flavoring bread, cake frosting, tea.

Related reading:
A comparison of the atemoya and cherimoya.
What's the difference between mirin and rice vinegar?
How do Japanese and Indian curries differ?
We compare ponzu and soy sauce.

The taro and ube are both starchy tubers that can be used is sweet and savory cooking. However, they are different in appearance and flavor, and we don't recommend using each plant interchangeably.

It is hard to say which option is best for cooking; you will need to experiment with each to decide which you prefer. For fun, colorful desserts we prefer the ube; it adds sweetness and a vibrant purple-pink color to any dish. For a versatile savory alternative to potato, the taro is delicious. They’re both laden in carbohydrates so if you are looking to carb load before your next sports event, either will work well.

Of course, depending on where you live, both options may not be readily available. Taro is much easier to find in many countries; if you’re ever in the Philippines or Japan, be sure to try them both out and see what you prefer.

Have you tried ube or taro before? What did you think of their taste? Please let us know in the comments below.