Purslane is a herb that can be found growing in sunny parts of the United States and is considered an invasive weed by many. The juicy green leaves are crunchy and have a mild tart flavor like sorrel. They are a tasty addition to salads and soups and can be cooked as a side dish or used as a thickening agent.

If you don’t have any growing in the garden, then you’ll find it hard to buy as the leaves aren’t usually sold in supermarkets. Instead, you may want to use a purslane substitute if it’s needed in a recipe. We’ve compiled a list of our favorite replacements.

What are the best alternatives to purslane?

To replace purslane in salads and cooked dishes some good options are sorrel, watercress, spinach, or mustard greens. Try filé powder, okra, or Malabar spinach for cooking in stews and other dishes where the purslane is being used to thicken the food. 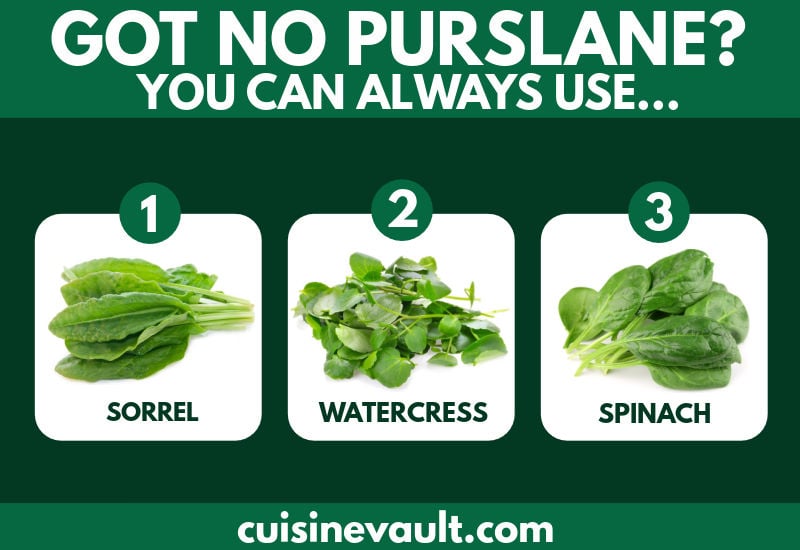 Mature sorrel is an acidic, tangy herb which people often compare in taste to a tart apple. It contains oxalic acid which is what makes rhubarb tart. This spring green has a spinach-like texture that is ideal for salads or sautéing briefly and serving as a side dish.

If you’re looking for an ingredient that is best for mimicking purslane’s flavor, then sorrel is your best bet. It is delicious raw or cooked and will help thicken dishes, though not as much as purslane.

Raw watercress has a peppery flavor that diminishes once cooked. It is excellent for adding to stir-fries and casseroles, bringing a subtle vegetal taste to food.

Watercress provides impressive nutritional benefits and is a useful source of vitamins, iron, calcium, and potassium. It is a milder version of purslane and will fit into any recipe that calls for the original ingredient. But if you enjoy growing vegetables at home, be wary of mature watercress which can turn bitter.

Spinach leaves are an even milder vegetable than watercress, a great purslane substitute for people that don’t enjoy strong-flavored food. Spinach won’t contain any of the tart flavor you get from purslane, so if you use it in a salad then add a squeeze of lemon or balsamic vinegar to balance the dish.

Mustard greens have a spicy taste that’s similar to a gentle mustard. The mature leaves will require cooking before eating, but they are tender and crunchy when new - perfect for eating raw.

Use mustard greens to replace purslane in raw or cooked food.

Filé powder has a root beer flavor with hints of savory and thyme; it provides a eucalyptus aroma. While this seasoning won’t match the flavor or texture of purslane, it is useful as a thickening agent. Recipes for stews, chowders, and sauces that use purslane as a thickener, can use filé powder instead.

If your goal is to thicken food, you may also want to try okra or Malabar spinach, two vegetables which are excellent for this purpose.

Fresh parsley is a slightly bitter, herbaceous ingredient that brightens a dish and adds balance to heavy food. While parsley doesn’t have the juicy, crisp flesh that comes from purslane, it can be used if you’re in a pinch.

Parsley is a herb that will bring extra flavor and color to salads or slow-cooked dishes. It is also a versatile garnish.

Arugula, or rocket leaves, will add a peppery kick to salads and can also offer bitterness if left to mature. While the leaves are commonly eaten raw, they can also be cooked.

Keep in mind they are delicate and don’t require much cooking before serving.

Rapini is one of the more bitter foods you’ll come across. In most parts of the world, it isn’t sold in mainstream supermarkets so you may have trouble finding it. You can read more about the taste of rapini in our handy cooking guide.

Although rapini can technically be eaten raw, most will find it far too bitter. Instead, parboil it before sautéing with olive oil and your favorite aromatics.

The green leaves from nasturtium flowers are a tasty combination of pepper and tang, with a subtle sweetness. They are versatile and can be used in salads, or finely chopped and added to dips, vinaigrettes, and sauces.

Although nasturtium leaves can tolerate heat, they should be added at the end of cooking. They are not useful for thickening food.

If you’d like to learn more about using flowers in cooking, then check out our guide to edible flowers.

How to prepare purslane

To prepare purslane for use in cooking, add a bunch to a sink filled with cold water. Gently wash the leaves, swishing them in the water to remove any dirt or tiny seeds. Thick stems are best cut off with scissors and discarded. Finally, remove the purslane from the sink and pat dry with a tea towel or paper towels.

Tip: Although some of the small seeds will remain on the purslane after washing, these are perfectly edible.

Purslane is best stored in the refrigerator, wrapped gently in a tea towel, and then placed in a plastic bag. It will usually keep for 2-3 days before losing quality.

Purslane can also be steamed and once cooled, added to ziplock bags and frozen for up to 3 months. It will lose its crispy texture but will still make a tasty ingredient for soups and other foods with liquid. 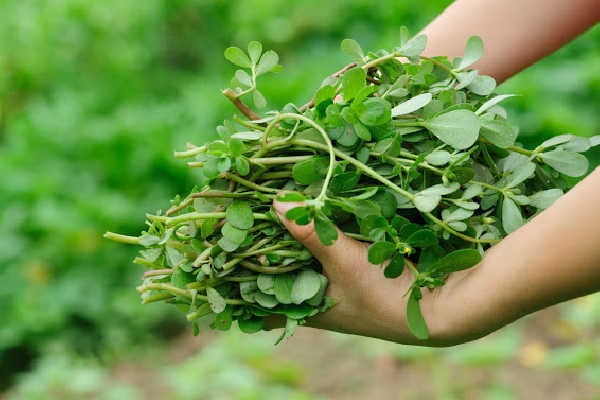 Purslane may be considered an invasive weed by many, but its leaves are juicy and crunchy with a mild tart flavor. If you can get your hands on sorrel, it’ll do the best job of mimicking purslane’s flavor as well as acting as a useful thickener in some recipes. Watercress and spinach are easier to find in supermarkets and will work especially well in salads.

Have you ever tasted purslane leaves? What did you think of them? Please let us know in the comments below.