Brioche is a lightly sweetened bread that has a lovely soft and fluffy texture. The use of ingredients like butter, milk, and eggs give the pastry a rich-tasting, light crumb. Brioche bread is versatile, making it popular in many sweet or savory dishes. Of course, it's also great eaten on its own with a knob of butter.

If you’ve got no brioche, can’t eat them, or won’t eat them, then keep reading. We’ve forged a list of brioche bread substitutes that are the closest you’ll get to the real thing.

What can I use instead of brioche?

To replace brioche try using challah, Pullman bread, shokupan, or Portuguese sweet bread. Do you want a more authentic-tasting bread? You can make your own brioche at home using everyday ingredients like flour, yeast, eggs, sugar, and milk.

Challah is another type of bread that’s enriched with eggs and sugar. It’s a little sweet and has a delicious slightly chewy consistency that is similar to brioche.

Challah bread makes an excellent brioche substitute for eating on its own or as French toast. In classics like bread pudding, it soaks up custard without collapsing into a mess. You’ll end up with bread that’s toasted on the outside while soft on the inside – perfect!

You’ll find traditional challah doesn’t have dairy so it’s not a perfect match when it comes to mouthfeel. It lacks the richness that comes from brioche. However, challah will work in most recipes and you’ll find it’s just as delicious.

Most Pullman loaves are a useful rectangular shape, making them great for recipes where even shapes play a role. Croutons and Melba toast are good examples.

Shokupan, or Japanese milk bread, is a soft and fluffy white bread that’s also subtly sweet thanks to the addition of sugar. While brioche and shokupan have a comparable bouncy texture, bakers add a lot more butter to brioche, making it a richer bread.

Shokupan is made using a unique Yundane method which results in a soft, moist loaf or bun that stays fresh longer than most other breads. 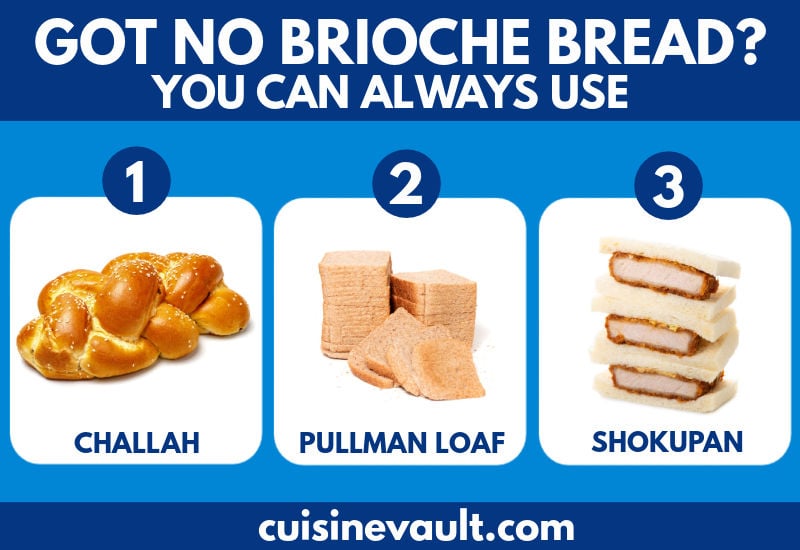 Also known as Hawaiian bread, Portuguese sweet bread is popular in the United States. Although the bread is sweeter than brioche rolls, it is delicious used to make ice cream sandwiches or desserts.

Both bread varieties have a similar soft, airy texture, but Portuguese sweet bread sometimes has extra flavors like lemon peel, brown sugar, or pineapple juice. While recipes will taste different, you may find the added ingredients enhance the final dish.

If you’re looking for an egg-free alternative to brioche then croissants are a popular option, easily found in bakeries and grocery stores. Their butter content provides a rich texture that is hard to beat.

Keep in mind that the omission of egg creates a different style of bread that’s less eggy and airier. Croissants are as much a pastry as they are a bread and aren't the ideal shape for French toast or puddings.

Kugelhoph, or gugelhuph, is usually baked in a Bundt mold and is more of a cake than a bread. It is yeast-based and popular throughout Europe. The addition of extras like raisins, kirschwasser, and almonds give it a unique flavor. However, its texture is similar to French brioche, and it’s especially useful in puddings and sweet dishes.

Panettone is an Italian sweet, cakey bread that is baked in a high tin to give it a cylindrical shape. Although it has more flavor than brioche, it is excellent used in desserts like trifle and French toast, or toasted into croutons.

If you choose to buy a panettone at the store, you’ll find they come in a wide variety of flavors with fillings like raisins and candied orange. Choose a plain panettone if you’re trying to mimic brioche closely. 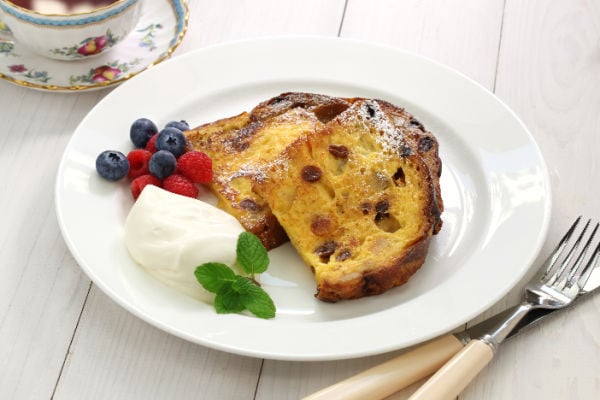 Pai Bao, aka Hong Kong bread bun, is a popular Asian sweet bun that is rich and eggy. The milky buns are revered for their soft and fluffy texture. Fill pai bao with hot dogs or create burgers for a tasty savory meal. Their sweetness pairs well with salty food, a lot like brioche buns do.

Potato rolls and bread are light, airy; they're popular in the United States. The bread has a thicker texture than regular bread and has a yellow shade inside, much like brioche. 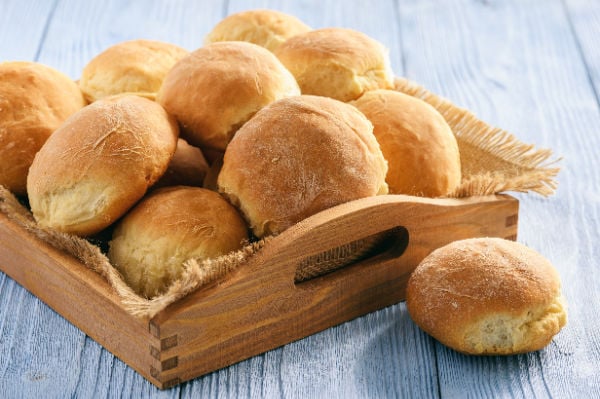 Some of the bread flour is replaced by dehydrated potato, so you’ll detect a mild potato flavor. The added starch results in a moist texture and longer shelf life, compared to regular bread.

Use potato rolls in bacon and egg wraps or use it to make a less sweet French toast.

Savarins are a lot like Rum Babas, only they’re baked in a larger ring mold and have no raisins added. A savarin has more of a cakey texture compared to brioche bread, but it’s great used in pudding recipes and toasted.

Ciabattas can be used if you’re looking for a low-sugar option. Burgers and sandwiches that call for the use of brioche will taste just as good with a fresh ciabatta roll. You can also use them for a healthier take on French toast or "churros sticks".

Making bread at home is a possibility if you enjoy baking and have the time. This option will provide the most authentic flavor and is good if you can’t buy brioche from your local baker or supermarket.

You can make brioche in a bread machine - gluten-free and low-carb varieties are possible if you get creative. Check out this brioche recipe as a good starting point.

Related reading:
What are the top uses for leftover brioche?
What can I use as a naan replacement?

What can I use as a yeast substitute in bread?

To replace yeast in bread you can use a combination of baking soda and acid like lemon juice. A sourdough starter contains naturally occurring yeast which will also work well.

Why does brioche bread last so long?

Brioche has a longer shelf life than regular bread as it has added butter. This fat helps the brioche stave off staleness.

Can I use margarine instead of butter for making brioche?

Margarine can be used to replace butter in brioche recipes by using equal quantities. You won’t get the same buttery flavor that you’d get from the original ingredient.

If you’re looking to replace brioche bread then challah is probably your best option, although it won’t be as buttery. Pullman bread, shokupan, or Portuguese sweet bread will also work for puddings, French toast, and even savory recipes.

While any substitute won't be a perfect match for brioche, the breads on this list will do a great job as a backup.