Coconut sugar is a natural sugar made from the coconut nectar of a coconut palm tree. It is a low-glycemic, healthier alternative to regular table sugar. However, it still contains high amounts of fructose and calories, so some might want or need a substitute for coconut sugar. 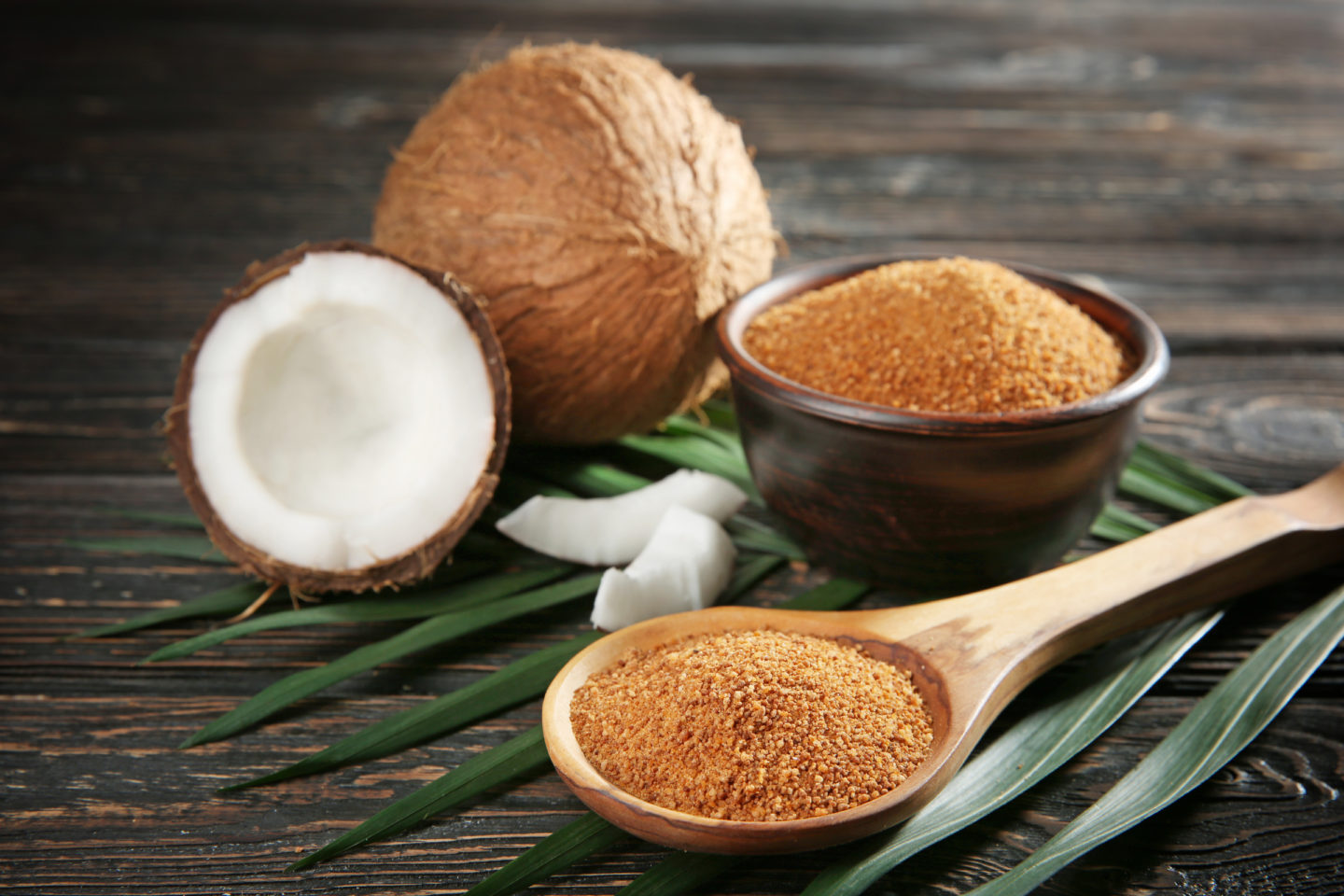 Organic coconut sugar adds a subtle sweetness and hints of caramel without overpowering other flavors in the dish. It’s often used in baking, cooking, or sweetening drinks and beverages since it is easy to dissolve. Coconut sugar is also known as coconut palm sugar, coco sugar, coco sap sugar, or coconut blossom sugar.

If you need a coconut palm sugar substitute, you can use brown sugar, sucanat, maple sugar, date sugar, monk fruit sugar, stevia, turbinado sugar, demerara sugar, or white table sugar. You can also use liquid sweeteners such as raw honey, maple syrup, and agave syrup. No matter which one you choose, remember to use them in moderation.

Light brown sugar is overall the best coconut sugar substitute. It contains molasses that give it a similar flavor and color to coconut sugar. Plus, it’s easy to dissolve, affordable, and a kitchen staple readily available in grocery stores.

Sucanat, short for “sucre de canne naturel” or “natural cane sugar,” comes from sugar cane. This is a raw sugar option that undergoes few processing steps and is much more unrefined than white sugar. It has slight hints of caramel and a light golden color similar to coconut sugar but with larger crystals and a coarse texture.

It doesn’t dissolve as easily as finer sugars do, so you might want to run it through a grinder or food processor before using it. You can sprinkle it on baked goods as it is or use it in other recipes once ground.

Maple sugar is another natural sweetener that can be used to substitute for coconut sugar. It has a complex flavor, mainly tasting like maple with slight hints of caramel, butter, and vanilla. Maple sugar also has a similar texture to granulated sugar.

Maple sugar is simply maple tree sap boiled until only granules remain. It has a lower glycemic index than regular sugar and won’t cause your blood sugar level to spike after consumption. But of course, consume it in moderation.

Use maple sugar in a 1:1 ratio as a coconut sugar substitute. You can stir it into drinks and beverages or sprinkle it over baked goods.

It’s liquid and lacks the slight caramel flavor of coconut sugar, but you can use raw honey as a coconut sugar alternative. Just make sure you buy raw honey and not processed honey.

Honey comes in a liquid form instead of coconut sugar’s granules. To keep the texture as consistent as possible, use ¼ cup of honey for each cup of coconut sugar needed. Note that you might need to reduce the other liquids in the recipe.

Like maple sugar, real maple syrup comes from maple sap. However, the sap is boiled just until it thickens into maple syrup. It has a similar flavor as coconut sugar, but maple syrup has a more maple flavor, like its sugar form.

You can use maple syrup as a substitute for coconut sugar if you have it. Like honey and yacon syrup, pure maple syrup is preferred over commercial maple syrup since it does not contain other ingredients such as artificial sweeteners.

Replace each cup of coconut sugar with just ¼ cup of maple syrup. You might also need to reduce the amount of other liquids used in the recipe to make up for the added moisture.

Agave syrup, maguey syrup, or agave nectar is a natural sugar option made from the agave plant. It is more similar to honey than coconut sugar, but you can still use it as a substitute. Although it goes through a commercial process, agave nectar does not contain any artificial sweetener.

Additionally, agave syrup has a lower glycemic index than coconut sugar and granulated sugar. People with diabetes won’t have to worry about spiking blood sugar levels when they use agave nectar, but moderation is key.

Agave syrup tastes sweeter than refined white sugar, so use it in a 1:4 ratio. For each cup of coconut sugar needed, use only ¼ cup of agave nectar. You might also need to reduce how much of the other liquids you add to make up for its moisture.

Date sugar is a sweet powdered sugar that you can use as a substitute for coconut sugar. It has a sweet butterscotch flavor with hints of caramel and the same consistency as caster sugar. However, since it's made from ground dried dates, date sugar differs from the date palm sugar made from sugar palm tree sap.

Date sugar has a lower glycemic index than coconut sugar, meaning it won’t cause your blood sugar level to spike when used in moderation. Date sugar does not dissolve as easily as coconut sugar or caster sugar, but you can soften it in hot water first to help it along.

Use in a 1:1 ratio when replacing coconut sugar in a recipe.

Monk fruit sugar is a natural sweetener that you can use as a coconut sugar substitute. It tastes like brown sugar but may have an aftertaste that some people dislike. Its fine granules also resemble those in cane sugar.

Although sweeter than regular sugar, monk fruit sugar contains no fructose, glucose, or calories. Plus, it has a zero glycemic index, meaning it cannot cause a blood sugar spike.

Since it is sweeter than refined white sugar, use ¼ cup of monk fruit sugar for each cup of coconut sugar that the recipe needs. You can simply add more if you feel the need to.

Stevia is another all-natural sweetener that can be used to substitute for coconut sugar. It comes in powdered or liquid forms and tastes a lot sweeter than coconut sugar. However, it may have an aftertaste that some find bitter.

It contains no sugar, carbohydrates, or calories, making it a healthy alternative to coconut sugar and refined sugar. In addition, using stevia won’t affect your blood sugar levels as long as you do so in moderation. Because of that, stevia serves as an ideal sweetener for people with diabetes. It's also perfect for those keeping an eye on their calorie intake.

You can use stevia in a 1:1 ratio, but you might want to start with a small amount since it is sweeter. Then, gradually add more until you find out how much stevia is just right for you.

It has coarse, sparkly granules, which keep their shape even when heated. Turbinado can be used interchangeably with demerara sugar. That's a good thing because it is easier to find in the U.S. than demerara.

To use turbinado as a coconut sugar substitute, replace it in a 1:1 ratio.

Demerara sugar is sometimes referred to as turbinado but is actually a different sugar. It tastes a little milder, contains fewer molasses, and has slightly larger crystals than turbinado. Nevertheless, you can use it to substitute coconut sugar.

Both demerara and turbinado are less processed than regular sugar. However, turbinado is healthier than demerara. Demerara sugar has a similar glycemic index to regular table sugar, so be careful when using it in large amounts.

Since demerara is as sweet as table sugar, you can swap it in a 1:1 ratio with coconut sugar.

It has finer granules and a different color than coconut sugar, but you can use regular sugar as an alternative in a pinch. Health-conscious individuals and people with diabetes may want to steer clear, but it won’t do any harm in a one-time use.

Unlike some coconut sugar substitutes, you can easily find and purchase granulated sugar in any grocery store. Simply swap refined sugar for coconut sugar at a 1:1 ratio.

Many people like to use coconut sugar in their recipes as a healthy alternative to refined sugar. However, if you didn't have it, then check out the following list of substitutes for coconut sugar.

What makes coconut sugar a better option than white and brown sugar?

Coconut sugar is healthier than both white and brown sugar. It has a much lower glycemic index than brown and white sugar, so it won’t cause energy spikes or sugar crashes when consumed in moderation. Coconut sugar also contains more nutrients since it is less refined than table sugar.

Can you use coconut sugar after the expiration date?

You can use coconut sugar even after its expiration date. When improperly stored, it might form clumps or turn rock-hard, but sugar does not go bad.

Does coconut sugar lose its flavor or quality of taste after some time?

Coconut sugar will taste the same even when stored for a long time. Just make sure to keep it properly in a dry, clean area. Store it in a jar or airtight container to prevent it from hardening into clumps.

Can you make a simple sugar syrup using coconut sugar?

This syrup will last for six months and is a much better sweetener for drinks and beverages than regular coconut sugar.