The main difference between ssamjang and gochujang is their taste; ssamjang offers a well-balanced savory taste, while gochujang provides a sweet and spicy flavor profile. These sauces also differ in the ingredients used; ssamjang consists of several components like doenjang, gochujang, sesame oil, sesame seeds, and sweetener. On the other hand, traditional gochujang only has chili powder, fermented soybeans, barley malt powder, and salt. 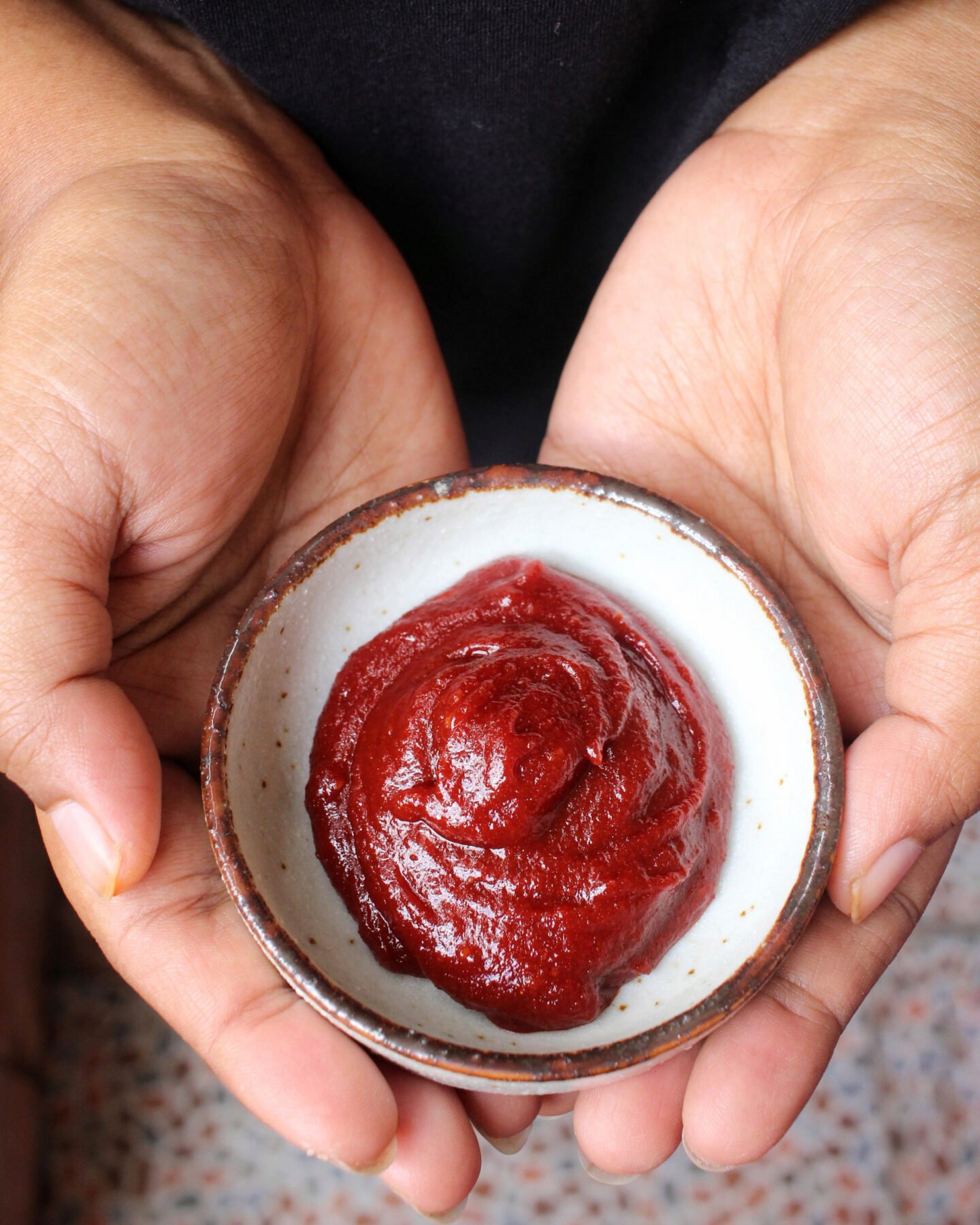 Their flavor profiles also influence their applications; ssamjang is best used as a dipping sauce in Ssam, a traditional way of eating lettuce with rice and meat. On the other hand, gochujang works best when mixed with other things, like in stews, soups, and as the main ingredient in bibimbap, a Korean rice dish that is spicy and savory.

Read on to learn about the differences between ssamjang and gochujang, their flavor profiles, uses, the best brands for each sauce, and other related topics.

A Comparison of Ssamjang and Gochujang

Ssamjang is a salty, spicy sauce that is a mix of gochujang and duenjang, combined with sesame seeds, garlic, and sesame oil. It has a mildly sweet and nutty undertone, but the dominant flavor is pungent umami—the result of fermented soybeans. It has a very smooth texture, although you’ll sometimes find bits in it, such as chili seeds.

Like most sauces, there are many different recipes for making ssamjang. A range of additional ingredients can be used to make the sauce, including anchovies, brown sugar, ground beef, or dried shrimp. However, they always have the core ingredients: gochujang and duenjang.

Gochujang is a Korean fermented chili paste that is a mix of hot, sweet, and savory all rolled into one. Although it does have a kick of heat, it isn’t overwhelming like some others, such as ghost sauce.

It has a smooth texture, making it ideal for use as a flavorsome dip. The ingredients in gochujang vary depending on who makes it, but the main ones are chili peppers, fermented soybean paste, rice powder, and salt. We previously wrote about the best substitutes for gochujang in case you need an alternative.

Related article:
Find out what the best ingredients are if you need to replace sambal oelek in a recipe.

Comparing Their Uses in Cooking

Ssamjang is commonly used as a dipping sauce. Barbecued meat and vegetables will both benefit from this condiment’s spicy, umami flavor. Also, fried octopus benefits from the addition of ssamjang—this dish is called jjukumi ssamjang.

A favorite use is to make ssam, a popular dish in Korea. Leaves from lettuce or cabbage are used to wrap small pieces of meat, rice, and a little dollop of ssamjang paste. Everything is rolled into a ball, making it easy to eat out of hand – the ideal street food.

Gochujang is excellent in stews, soups, dips, and as a marinade for meat dishes. One of its best-known uses is in bibimbap, Korea's national rice dish. It is a plate that includes rice, gochujang, soy sauce, kimchi, and a selection of chopped vegetables. An egg is usually added to the plate for extra color and flavor.

Doenjang is a brown paste that is made from fermented soybeans and shares similar flavor characteristics to miso. However, doenjang has a punchier flavor than miso. Even though it is used in ssamjang, it is a great way to give rice, vegetables, meat, or soup a deeper flavor.

What brand is best to buy?

Chung Jung One is a South Korean producer that makes ssamjang. Their brand is a mild version, ideal for Korean ribs, barbecue meat, or bulgogi. You can check Chung Jung One out here, along with loads of customer reviews.

If you're in need of gochujang, then this Korean Chili Sauce is a great option. Perfect for adding to chicken wings, bibimbap, or as a dipping sauce.

Just so you know, we earn a small commission on the links above.

Can I use ssamjang instead of gochujang?

Both are spicy Korean sauces that have similar uses in the kitchen. A Korean who's grown up with these sauces could quickly tell the difference between the two. However, the average newcomer to Korean sauces would never know the difference. Each sauce could be used interchangeably in recipes. Indeed, you wouldn't ruin your food by replacing one with the other.

Ssamjang and gochujang are both Korean bbq sauces that are delicious used for dipping or to spice up vegetables and meat. They have similar flavors, with around half of ssamjang being made of gochujang.

So which one should you buy? If you’re looking to make bibimbap, or want a dipping sauce that’s spicy with a hint of sweetness, choose gochujang. Need to make ssambap or enjoy pungent, umami flavored dipping sauces? Then opt for ssamjang.

There’s no need to over-think these sauces, though. They are similar in appearance, texture, and taste. For most non-Korean eaters, the differences would go unnoticed at the dinner table.

Have you tried either of these sauces? Let us know what you think of them in the comments below.