This Whole30 and keto kale is an incredibly simple, hearty, and healthy dish that can be made in less than 20 minutes. And even though kale is a bit high in carbs, it is also loaded with fiber and nutrients, making it possible to eat it on keto in small servings.

I'm not a fan of kale, but this low-carb kale recipe is a real game-changer. The cream cheese, bacon, onions, and garlic make a huge difference in the way kale tastes.

You can serve this kale as is, or if you want, omit the bacon and serve it with some pork chops, salmon, or chicken fritters.

Can You Eat Kale on Keto?

Yes, you certainly CAN eat kale on the keto diet! However, still, it does have some carbs, so you won't be able to eat too much kale.

One cup of raw kale has around 0.9 grams of carbs. But for the same serving size, kale has just 0.07 grams of net carbs, making it compatible with the keto diet.

Besides being low carb, there are also numerous advantages of eating kale. Of course, it is also low in calories - only 31 calories per 1 cup of raw kale. Moreover, it is loaded with various vitamins and minerals: vitamin C, vitamin A, vitamin K, manganese, calcium, etc.

Here's What You Need

With my recipes, I like to keep things simple and quick. Therefore, you'll need only 5 ingredients to make this keto kale recipe. And you can basically buy these products in any grocery store.

Here's what you need to make this sauteed keto kale:

And, well, of course, you'll also need some salt and ground black pepper. Sometimes I like to make my sauteed kale spicy. In such a case, I just add some red pepper flakes or cayenne pepper. Additionally, you can also add some cheese. Parmesan cheese, shredded mozzarella, provolone, or cheddar will taste perfectly in this kale recipe.

But keep in mind that when you make some changes to this recipe, the nutritional value of the meal will also change.

How to Make Sauteed Keto Kale

Once you gather all the needed ingredients, you can start cooking your low-carb kale. Here's what you should do next:

It's best to serve your kale right away. Or just reheat it before serving since it doesn't taste as good cold as it tastes when served warm.

You should store this low-carb kale in an airtight container or on a plate covered with some food wrap in your refrigerator. It can be kept this way for up to 2-3 days.

If you want, you can also freeze this low-carb kale. Just place it in a container or even a zipper bag, and then place it in your freezer. It can be stored like that for up to 2 months.

Whenever you want to serve your frozen kale, just place it in your refrigerator to thaw overnight, and then throw it on your skillet for a few minutes for the extra moisture to evaporate. 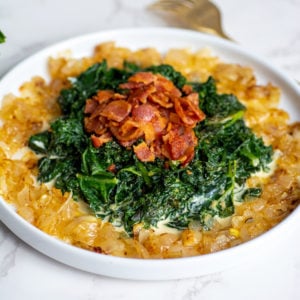 This Whole30 and keto kale is an incredibly simple, hearty, and healthy dish that can be made in less than 20 minutes. And even though kale is a bit high in carbs, it is also loaded with fiber and nutrients, making it possible to eat it on keto in small servings.
5 from 4 votes
Print Recipe Pin Recipe
Prep Time 5 mins
Cook Time 15 mins
Total Time 20 mins
Course Dinner, Lunch
Cuisine American
Servings 5
Calories 173 kcal