Rye (Secale cereale) is a grass grain that has been grown and used as food since Neolithic times in Asia, having since spread, like wheat, barley, and other grains, all over Europe. It has been traditionally consumed as food made with its flour (such as bread), fermented items (like spirits and probiotics), animal fodder ,or just cooked as whole grains.

Like most grains before it, rye became one of the wonder-foods of the past decades, allegedly capable of fighting insulin resistance, controlling appetite and promoting weight loss, decreasing inflammation, and many other benefits.

Rye flour is what it says: flour made from rye grains.

Does rye flour offer all the benefits attributed to it? Yes, it does, not unlike other whole grain flours. Each one of the grain flours offers a higher or lower benefit in one of those health issues. They all do so not because there is something magical about the grain itself, but because it is whole grain instead of refined flour, which most industrialized starchy foods are made of.

Observe the picture below: 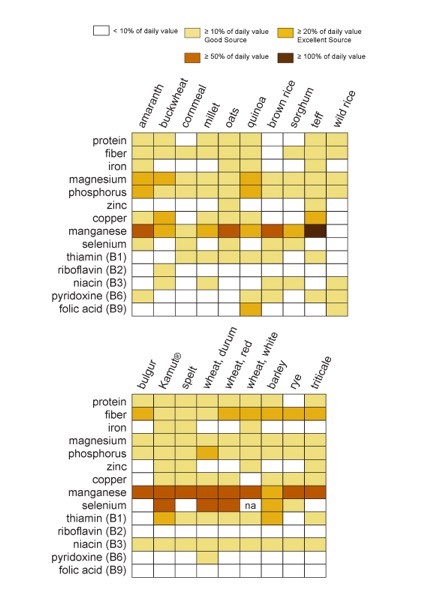 Consensus among the medical and nutrition sciences communities about the importance of higher fiber consumption and whole grain consumption is not recent (21, 20, 10). Whole grain products (flour, bread, pasta, etc.) are made from flour that pulverizes the grain itself, including the endosperm, the bran, and the germ.

This is a whole grain: 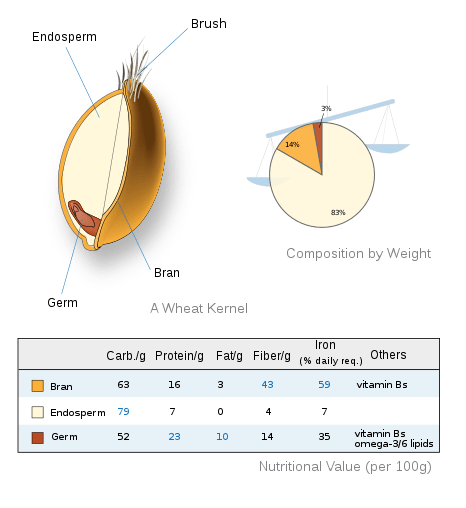 A wheat kernel and its nutritional value. Data sources: Illustration and composition of wheat kernel is based on (and simplified from) Berghoff (1998), cited by muehlenchemie, as well as other sources on the internet. Nutritional value: Endosperm Germ Bran Berghoff W, 1998. Längsschnitt durch ein Getreidekorn. aid infodienst Verbraucherschutz Ernährung, Bonn. By Jkwchui - Own work, CC BY-SA 3.0,

Regardless of the type of diet that is best for you – your metabolism, your intolerances, your genetic makeup, etc. –, what concerns both the medical community and evolutionary biologists is that humans have been consuming grains for at least a good ten thousand years, but only refining them for the last 100 years. When grains are refined, most of the bran and germ are eliminated.

The refined product is mostly the starchy endosperm (21). In the grain-refining process, the bran and germ are removed, resulting in the loss of dietary fiber, vitamins, minerals, lignans, phytoestrogens, phenolic compounds, and phytic acid. These are all compounds that have been associated with positive biological activity.

This has become such an important problem that medical and dietetics societies, as well as government health agencies, have been issuing statements encouraging the population to eat more fiber (23). They recommend the consumption of whole grains to prevent chronic diseases. Epidemiologic studies suggest that whole grains are protective against cancer, especially gastrointestinal cancers, such as gastric and colon cancer, and cardiovascular disease.

The benefits derived from consuming whole grains are not just the preservation of the fibrous part but also compounds with antioxidant activity such as trace minerals, phenolic compounds, and phytoestrogens, with potential hormonal action. Other potential mechanisms include the binding of carcinogens and modulation of the glycemic response (10).

Rye flour and rye consumption, in general, have been shown to be beneficial. Also, each grain is slightly different in its composition and, therefore, in its biological properties. These different properties will be discussed in the items below.

As the graph from the “Whole Grains Council” shows, most whole grains studied up to now show important benefits to human health.

Research into rye, specifically, is not particularly new. As the sequence of graphics below demonstrates, the interest on rye was almost constant during the past 70 years. Constant and small. The research into specific aspects of rye’s biological activity did peak in recent times. However, as is suggested by the sequence of images, this interest reflects much more a general interest in the importance of whole grains than in any special power rye may have.

Recent research on rye has been published in reputable peer-reviewed journals (11, 12). However, for reasons not hard to understand, they are mostly comparisons of whole grain rye with refined wheat (18, 7).

Considering methods and outlet, it is not bad research. Nevertheless, it is not a sufficiently strong basis to promote rye as such a special grain in comparison to other whole grain foods.

There is no doubt that the substitution of refined grains by whole grains can help with weight loss. One of the most important factors in this effect is the presence of “resistant starch.” Starch is a long chain of glucose molecules. If it is fully broken down into its monosaccharide units (glucose), all its energy is available.

However, if a part of the starch in your food can’t be broken down, in practice you ingest less energy. What happens to resistant starch in your body? You don’t digest it, but your friendly gut bacteria do. For the good and for the bad: their metabolism can release useful products, such as short-chain fatty acids, but they can also cause digestive discomfort (14, 5, 15).

Whether rye is more helpful than any other whole grain flours or preparations for weight loss, we can’t say.

Will It Help Control Appetite?

There is ample published evidence that rye products produce prolonged satiety. But compared to what? The published studies point out that there is accumulated evidence that more fibrous meals are associated with appetite control (as are fattier meals). The emphasis on rye is that it hadn’t been studied for this effect as much as oats, whole wheat, and other whole grains (8, 6, 25).

Will rye products help you control your appetite? Yes, they will. And so will many other whole grains. The mechanism, again, is related to the different digestive processes that take place on foods containing whole grains compared to refined grains, not only because of the presence of fibers and resistant starches, but also because of other components as well as gut microbiota activity.

Will It “Regulate Glucose”? What About “Gene Regulation” and Inflammation? 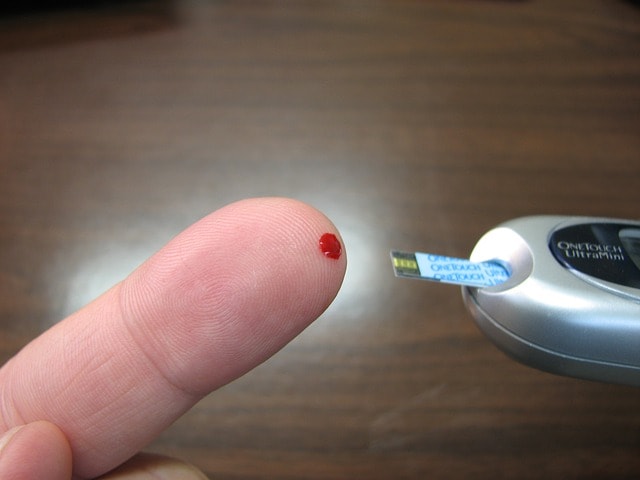 Here we need to stop and introduce a few more scientific enigmas, as well as some certainties. Also, we need to dissect the study mentioned by the proponents of the claims concerning glucose, insulin, and gene regulation, as well as inflammation modulation.

First of all, let’s clarify that these three issues are all interrelated: insulin and glucose regulation, gene regulation, and inflammation (11, 12).

Metabolic syndrome is a set of conditions that usually leads to type 2 diabetes and/or cardiovascular disease. These conditions are abdominal obesity, high blood glucose levels, high blood pressure, high serum triglycerides, and low high-density lipoprotein levels. It is a snowball of metabolic disasters that includes dysfunctional insulin response (insulin resistance, but also post-prandial – which means after having a meal – hyperinsulinemia, etc.).

In one study (12), 47 people who already had metabolic syndrome were the experimental subjects of a 12-week diet intervention consisting of:

GROUP 1: consumed oat and wheat bread and potato (this is the high postprandial insulin response group, which is bad and related to the worst outcomes of the syndrome)

GROUP 2: consumed rye bread and pasta (this is the low postprandial insulin response group, which is good and goes the other way)

What this study showed, was that GROUP 1 had higher inflammatory mediators, higher insulin response, and slower glucose response (decrease after meals). To make things worse, the genes responsible for this bad outcome were increased in function (“up-regulated”). In other words, this group was in bad shape as compared to GROUP 2.

Considering that the relationship between diabetes, its related degenerative conditions, and inflammation is consensual today (19, 2, 28), it looks like low post-prandial insulin response is relevant. Does that mean rye is essential? No. It means exactly what it says: low post-prandial insulin response is important. Does rye promote that? Yes. And so do innumerable other dietetic alternatives, including radical reduction of carbohydrates in general.

Let us examine the takeaways here:

Will It Help With Gallstones? 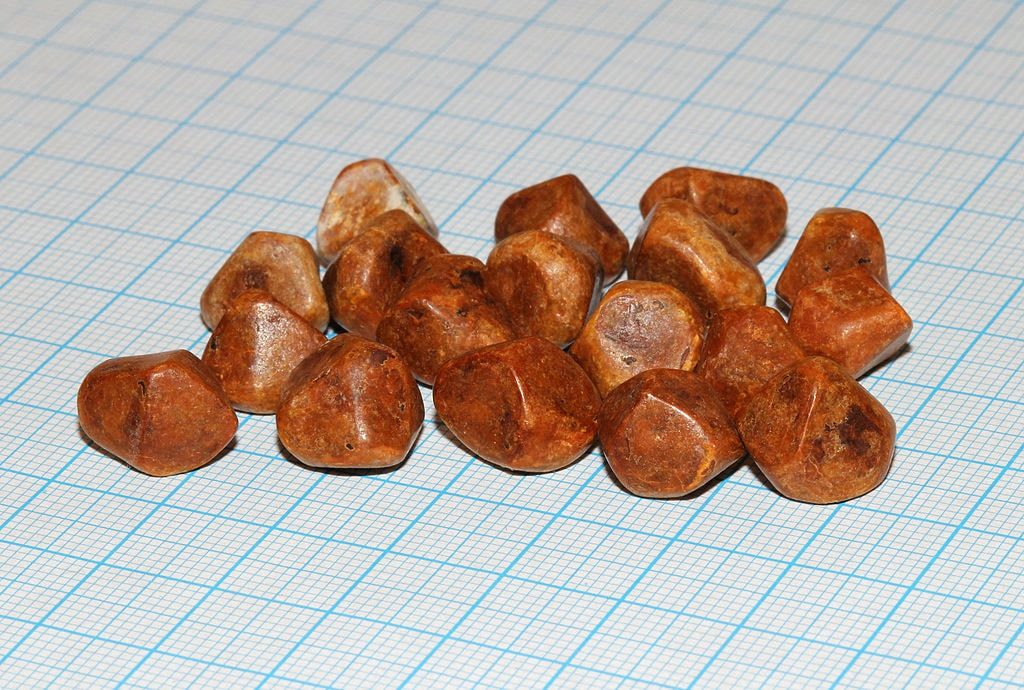 There are several studies that strongly suggest a gallstone-suppressing or -protective effect of rye as compared to other grains, and all whole grains as compared to fiber-free diets. All these studies were conducted on hamsters (26, 27).

Does It Have Anticancer Properties?

Apparently, it does. There are several studies associating rye consumption with lower cancer incidence in the line already pointed out here that relate whole grains to cancer-preventive effects. However, there are some studies associating specific components of rye with anticancer biological activity.

For example, an in vitro study on the prostate-cancer suppressor activity of benzoxazinoids, which naturally occur in high concentration in rye, encourages more research on the matter (22), especially considering the accumulated evidence of the positive effects of whole grain rye consumption on the evolution of prostate cancer in elderly men (4).

Here is the take-away: nutrition and cancer researchers have known for a long time that there is a correlation between higher fiber consumption in food and lower cancer incidence. This is, however, epidemiological information. That means that when we look at big data, we see a trend. That does not mean that we can predict any outcome on any specific individual. What should you do, then? It sounds like a good idea to keep a diet with higher fiber content and, especially if you have been diagnosed with prostate cancer, rye is a good choice.

But as we emphasize here all the time, this is a rational, evidence-based decision about doing the best you can to prevent or manage your condition. It doesn’t mean rye will cause anything that will cure your cancer. We don’t know that, and we won’t know it for a very long time.

Rye contains gluten. Unless you have some form of gluten intolerance (or its more serious manifestation, celiac disease), rye flour is safe. Of course, the reaction of your friendly gut bacteria to it is unpredictable. You can feel great, or you can feel some bowel discomfort.

You may also feel discomfort only at a certain frequency or quantity consumption. This is not specific to rye: we are pretty unique when it comes to how we metabolize food.

According to the present review of published scientific evidence, there is no indication that rye flour consumption can predictably make an important difference in quality of life, providing great benefits. For a healthy individual, it may or may not: again, biological individuality is king when it comes to how we metabolize food.

We are not thinking about obese or overweight people, or those making the transition from very unhealthy diets, highly dense in refined sugars and trans fatty acids, to a healthier lifestyle. For those, rye (or any other whole grain) will be wonder-food. Just like any exercise, even just walking, may be a wonder-move for inactive people.

Anyway, educate yourself on the benefits of whole grains and their importance in your meals. It is about much more than just avoiding constipation (10).