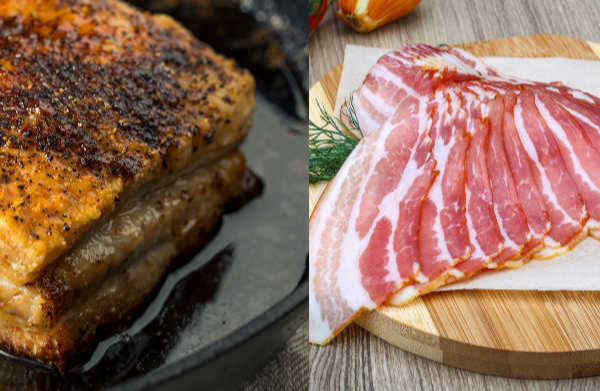 Unless you have dietary restrictions, there's an excellent chance that you've had your share of bacon over the years. It's quick and easy meat to cook for breakfast with eggs. The salty flavor also complements pizza, quiche, asparagus, baked potatoes, and many more savory and sweet dishes.

Pork belly doesn't have the same level of fame, but that doesn't make it any less of a contender in the kitchen. If you'd like to know the difference between pork belly and bacon, keep reading for a full comparison.

What is pork belly?

Pork belly is a large slab of uncured and unsalted meat that comes from the underside of a pig. It has a large layer of fat that still has the skin on, and underneath this is a layer of pork.

Once cooked, pork belly provides a delicious meal. Moist pork combined with rendered fat and crispy, salty skin is an incredible mix of flavor and texture. 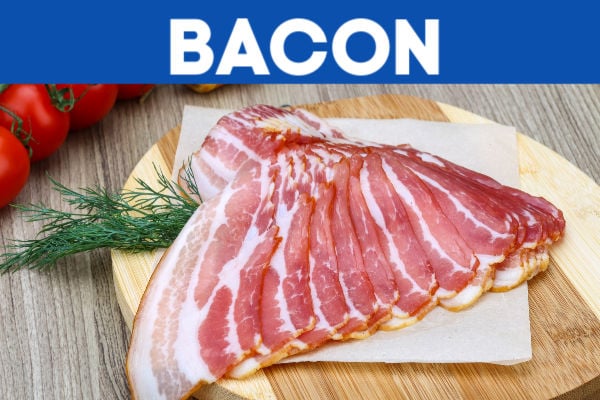 Bacon is a cured meat that can come from different parts of the pig. A popular variety in the United States is streaky bacon (aka American bacon), which comes from the pork belly. Other popular parts of the pig for bacon making are the back, cheeks, shoulder, and loin.

Bacon is made by salting and seasoning cuts of pork, then leaving for a week before removing the seasoning, drying, and smoking it. The final result is thin, long strips of salty meat that can be fried or grilled within minutes. The texture of bacon, once cooked, can range from firm through to crispy if cooked longer.

Related post:
Need to know how many slices of bacon in a pound? Check out our article to learn more.

What is the difference between pork belly and bacon?

Pork belly and bacon are very different types of meat. The only comparison you could draw between the two is that they both are derived from pork. Also, the most common type of bacon (streaky bacon) comes from the pork belly. However, bacon also comes from various other parts of the pig.

Let's look at the key differences.

How the meat is sold

The first glaring difference you'll notice is how the meat is sold in stores. Bacon is sliced into thin strips and produced in small packs. Pork belly is usually a large chunk of meat. It will have nothing added to it, unlike bacon that has been cured with large amounts of sodium and nitrates added.

A major difference between these two types of meat is how they're prepared. Let's start with bacon. It is almost impossible to cook it wrong. Toss it in the frying pan, and within a few minutes, it's ready to consume. An absolute novice cook can cook bacon.

Pork belly, on the other hand, is the polar opposite. You'll see recipes plastered over the internet and in cookbooks for making pork belly. Usually, they explain how easy it is. Okay, so there aren't a lot of steps to roasting pork belly. But that doesn't make it easy to cook. I have eaten many servings of pork belly that have dry meat or crackling that isn't crispy. Getting them both right isn't easy for a beginner chef. 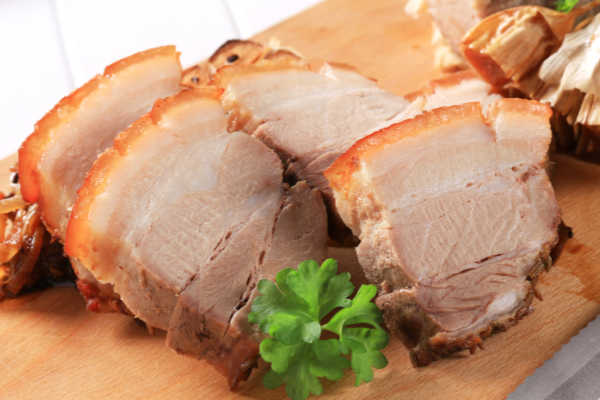 Pork belly will also take a lot longer to cook. The large quantity of fat will take time to render down. So, if you're in a hurry to eat, choose bacon. If time is on your side, pork belly is an option.

Bacon is like a Swiss army knife in the kitchen – it can be used in dozens of potential meals. Use bacon as the star of the dish or as a supporting ingredient in burgers, casseroles, soups, pizza, and many more recipes. Bacon even has a place in sweet food. The saltiness of bacon pairs deliciously with sweet vanilla or chocolate homemade ice cream.

In most cases, pork belly will be the hero of the dish. Cooked well, it looks stunning on the plate paired with a side of vegetables. You wouldn't use pork belly in many recipes that you'd use bacon. A pizza topped with pork belly wouldn't be right.

Pork belly and bacon are both cuts of meat that come from the pig. Although bacon is made from pork belly, it can also come from other parts of the pig.

So what's the most significant difference between pork belly and bacon? I think it's that bellies are sold as a large slab, raw; bacon is sold cured, in thin slices.

If you're entertaining, you won't want to cook a pork belly for the first time – unless you have forgiving guests. Cook it wrong, and the meat will be rubbery, dry, and unpleasant. In saying that, once you've made a few bellies, you'll find that cooking them becomes more straightforward. Creating consistently moist meat with a crispy outside will be child's play!

What's your favorite, pork belly or bacon? Let us know in the comments below.