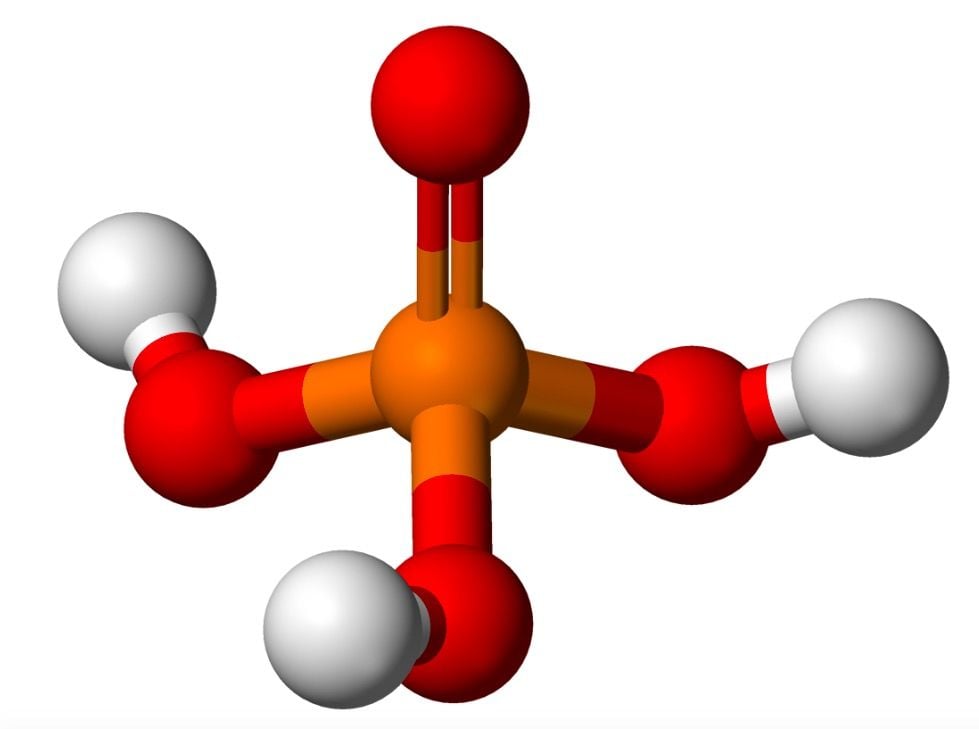 Too many people in the natural health world treat phosphoric acid as ‘public enemy number one’. This is simply misinformation that comes largely from tabloid-style blogs that sensationalize and manipulate science.

So what is the real backstory to phosphoric acid and health? What does the scientific literature have to tell us about the effect of phosphoric acid on our health and wellness?

What is Phosphoric Acid?

Phosphorus is a non-metal which has an atomic number of 15 on the periodic table (remember that table from science class). It is shortened to the letter P or P15. It is said to have been discovered by Hennig Brand in 1669 by evaporating urine.

Phosphorus is not found uncombined in nature. It binds to 4 oxygen molecules to make phosphate (PO4). Phosphate is essential for cell growth and structure. Phosphate is the sugar backbone of DNA and RNA and as such is essential to our very existence. It is also the backbone of ATP (adenosine triphosphate key) which is key to energy transport in humans.

Essentially P, PO4, H3PO4 can be seen as a continuum. Is it good or bad? In reality, it can be good or bad. It is good when left to nature. Phosphate is essential for human survival and so classifies as good. However, man can manipulate phosphorus and cause harm. Phosphorus has been used in bombs (not as nature intended) and phosphoric acid is used as a food additive (also not as nature intended).

The issue is less about whether P/PO4/H3PO4 is good or bad but what we as humans do with it. The real problem is that humans both manipulate and overconsume phosphorus.

What Has Phosphoric Acid In It?

Phosphate is found in:

Here are examples of estimated  phosphorus content (per 100mg) for selected foods:

While each item may only seem to have a modest amount of phosphorus, what matters is the cumulative intake. Think of a ‘meal deal’ with frozen pepperoni pizza and soda followed by cookie ice-cream!

There are two main kinds of phosphorus in food: natural (organic) and added (inorganic).

When an organism consumes anything lower in the food chain (animal/plant) then the higher-order organisms obtain the phosphate from the lower order entity.

Plants are a rich source of organic phosphorus. The main form of storage of phosphorus in plants is phytate. Phytate requires enzymatic digestion. Humans do not express the enzyme phytase which is required to break down phytate. This means that phytate is not easily digested and absorbed. (Hu). This limits the amount of phosphorus ingested from natural sources of phosphorus. It is estimated that only approximately 50% of ingested phosphorus from plants is absorbed into the body (1).

The extraction ratio of phosphorus from organic animal products is higher than that of plants. It is estimated that 80% of the phosphorus in animal produce can be absorbed by humans (2, 3, 4, 5).

The 350 ‘Generally Regarded As Safe’ phosphate-based products are used in the food industry for:

That’s a lot of inorganic phosphorus.

How Much Is Known About Phosphoric Acid Consumption?

Phosphate intake in the US is measured by the National Health and Nutrition Education Survey. The typical western diet far exceeds the recommended daily allowance for phosphorus of 700mg/day.

One research study looked at 38 chicken products and found that the estimated phosphorus intake underestimated the actual phosphorus content by 84mg/100mg of chicken (16).

Clinical interest in a high phosphate intake dates back to the 1970s when it was noticed that animals fed a diet high in phosphate had lower bone density than would be expected (10).

Studies in diverse groups such as baboons, Finnish women and Gambian children all support the extra dangers of a low calcium intake when phosphorus intake is high (Petitfor, 1, 9).

Studies show that a high phosphorus intake stimulates the secretion of parathyroid hormone and FGF-23 which in turn leads to bone mineral density loss and heart disease (2, 3, 4, 5, 18)

Summary: There are data to support the claim that phosphoric acid lowers bone density.

Does Phosphoric Acid Cause “Kidney  Issues”?

There is also emerging data that phosphorus itself can damage the kidneys. A meta-analysis of 25,546 patients enrolled in 12 studies showed a statistically significant relationship between increasing phosphate levels and the risk of renal disease (Da).

Summary: There is evidence to support the claim that phosphoric acid damages the kidneys.

Does Phosphoric Acid Decrease Nutrients In The Body?

There are very limited data available on the effect of phosphoric acid on the absorption of other nutrients. One study is commonly quoted as a reference to support the fact that a high intake of phosphorus reduces the absorption of iron, copper, and zinc . However, a subsequent study did not support this data (15). The Snedeker study involved giving nine men a range of calcium/phosphorus diets. The study showed that plasma iron, zinc, copper, and transferrin levels were not affected by changing the calcium/phosphorus content of the food.

Summary: There is no convincing evidence to support the fact that phosphoric acid decreases the absorption of nutrients in the body.

The body works hard to regulate phosphate levels. When phosphate levels rise, the body responds by depositing calcium-phosphate in body tissues. Specifically, high phosphorus levels turn the smooth muscle of blood vessels into a bone phenotype. This results in calcification of the blood vessels. This is known as ‘osteochondrogenic differentiation’ (8).

Calcification of the blood vessels can be seen on plain X-ray as white lines that run like train tracks down the legs. Calcified blood vessels do not function as efficiently as native blood vessels and can cause end-organ damage.

Summary: The body has inbuilt homeostatic mechanisms that limit the effect of phosphoric acid on the body’s acidity.

Some branded drinks contain a mixture of fructose, sucrose and phosphoric acid. These drinks are advertised as anti-nausea drinks. There is nothing in the medical literature to support the benefits of these drinks.

Summary: There is no science behind the claim that phosphoric acid has an antiemetic effect.

Are  There Any Other Uses?

A 2019 study from Brazil showed that phosphoric acid can be used as a dental acid etchant to prepare teeth with caries for photosensitization (21).

Are There Side Effects to Consuming  Phosphoric Acid?

High phosphate intake has also been shown to be associated with heart disease. (2, 3, 4, 5). A comprehensive meta-analysis shows that high phosphorus intake is associated with a higher risk of cardiovascular disease in patients. This association holds true for patients with renal disease and for patients in the general population with normal renal function (13, 11).

Summary: High phosphorus intake is associated with an overall increased risk of death and a higher risk of heart disease.

Nature is amazing. Plants are designed to store phosphate in a cellular matrix to limit its absorption in humans. The human body is equipped with a backup mechanism to regulate phosphate levels in case of excessive phosphate consumption.