When it comes to breakfast, I like simplicity and convenience. For many years, instant oatmeal was my go-to dish, thanks to its fast preparation and delicious flavor. However, these days, I need something even quicker and easier to eat.

Now that I have a high-quality blender, making breakfast smoothies is my favorite thing. All I have to do is toss some ingredients together, press a button, and I'm ready to walk out the door with a tasty and filling drink.

So, I thought, why not combine my love of oatmeal with my passion for quick-service smoothies? With a bit of creativity, I came up with the oatmeal breakfast smoothie, and I think you're going to like it as much as I do.

The Lowdown on Drinking Oatmeal for Breakfast

Depending on how thin you make your oatmeal, it's roughly one or two steps above a smoothie anyway. I was never really into cream of wheat myself, but that is even more of a smoothie than my instant oats, so there is a bit of precedence here.

There are two things that I really appreciate about this smoothie:

First, I don't need any unique ingredients to make it. Practically everything that goes into it is what I use for my morning oatmeal anyway.

Second, it is hearty and filling, which helps me power through the morning and avoid snacking before lunch. As far as meal replacement beverages go, the oatmeal smoothie is an excellent choice.

As a bonus, you can use flavored oatmeal if you want to add extra zest to your final product. I typically use standard rolled oats but feel free to use instant oatmeal packages if you're feeling jazzy in the morning.

The recipe for my oatmeal breakfast smoothie is super simple. All you need is a banana, some oats, almond butter, almond milk, and some cinnamon. I'll get into how you can customize this recipe later on, but these core ingredients are perfect as-is.

Technically speaking, you don't have to cut the banana, but you should break it down into smaller parts. Doing this will make it easier for the blender to work, and if you're using a single-serve model (like I do), the banana won't fit if you put the whole thing in one piece.

Here is a pro-tip for peeling a banana, by the way - start from the tip, not the stem. If you've ever struggled with ripping the stem open, you know what I mean. The end is much easier to break, and better yet, you get a peel fit for a cartoon afterward.

While you could buy a jar of fancy almond butter, I prefer to save money by using the machines at my local grocery store. These devices crush almonds into a thick paste right in front of you, so you know it's fresh and delicious. That said, unsweetened almond butter can be an acquired taste, so if you want to add some sugar, I recommend pouring a little honey into the mixture and stirring it up. Depending on where you go, you can get both in the same cup at the same time.

Step Three: Pour Some Oats on Me

As I mentioned, I like to use regular rolled oats, but you can get as creative as you like with flavored instant oatmeal packages. The more you add, the thicker the consistency, so keep that in mind. Some mornings, I like my smoothies to be thick and oozy, while other times I prefer thin and creamy.

I can't get enough almonds in my smoothies, so I always use almond milk. Since I try to avoid too much sugar in my diet, I prefer unsweetened vanilla milk, but you can opt for something with a little more flavor. Chocolate almond milk can be extra tasty for this recipe if you need a boost.

Finally, you can top off your oatmeal breakfast smoothie with a little cinnamon. I usually do this at the end and blend the cinnamon into the fully-mixed smoothie, but you can do it before if you want. When I'm feeling extra fancy, I also put a dash on the surface so that the cinnamon is the first thing I taste. 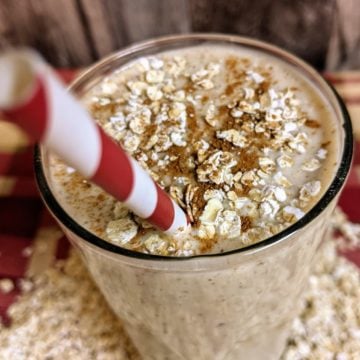 But, How Does it Taste?

The first time I tried this, I was amazed at how well it tasted like puréed oatmeal. The banana and oats give it some thickness, while the almond butter adds a little nutty crunch to the mixture. As I mentioned, you can make your smoothie thicker by pouring more oats in, which really gives it a hearty flavor profile.

My smoothies are relatively mild, but you can make yours sweeter by using flavored milk and sweet almond butter. The banana and cinnamon are usually enough for my tastebuds.

Can I Customize It?

There are a few ways that you can make this oatmeal breakfast smoothie your own, including: