Marmalade is a citrus fruit preserve that is commonly made from Seville oranges or other fruit like grapefruits, lemons, or limes. Depending on the type of fruit used, the flavor will vary; however, it is usually a combination of sweetness from sugar and bitterness from citrus fruit peel.

If you don't have any marmalade in the kitchen or you don't enjoy its taste, then you're going to need an alternative. We've compiled a list of our favorite marmalade substitutes so that you can complete any recipe without the original spread.

What can I use to replace marmalade?

To replace marmalade in baking or as a topping on toast, your best options are to use a jam, jelly, or a preserve. They will provide a similar flavor and texture although you won't get the same bitter punch that you get from marmalade - for many this may be a positive. Citrus zest is another good option for adding fruity, bitter flavor to recipes without the sweetness. Finally, chutney or orange juice could also be used for marinades and sauces where there is liquid involved.

Do you need to replace marmalade with an ingredient that closely mimics marmalade? A good quality orange jam will work well. It is made in much the same way and has similar applications in cooking. The main difference between the two is that jam is a mix of fruit, sugar, water, and pectin, cooked until thick; marmalade is similar, but it also includes the peel

Jam won't provide the same bitter flavor you get from marmalade. But you can still use it in the same way on toast and scones, stirred into puddings and desserts, spread on top of brownies, and used as a glaze.

Finding orange jam can be a challenge in supermarkets, but several brands do exist. If you can’t find any, check online or choose another flavor than orange. For example, if a cake calls for the addition of marmalade you could add apricot jam for results that are just as delicious.

Jelly will also work in place of marmalade although its texture is much smoother, and it also lacks the bitter burst of flavor. In most recipes, this textural difference will barely be noticeable.

Recipes for fruit preserves vary depending on who makes it. But you will usually find that preserves have whole chunks of fruit, so the texture isn't as smooth as jam. Instead, the fruit is preserved in a jar with chunks immersed in syrup or gel.

Use preserves in much the same way that you would use marmalade. They are delicious spooned into croissants and topped on scones or toast. Swirl any preserve into homemade ice cream and cake or use for fruity flavor and sweetness in puddings like fruit cobbler.

As with jam, a fruit preserve won't have the same level of bitterness that marmalade provides. If you want something with a bit more tangy, bitter flavor then keep reading.

Citrus zest is excellent for adding a zesty flavor without the sweetness. You can add it to baked goods, marinades, meat rubs, and even pasta sauce. If you're trying to replace orange marmalade, then your best option is to use orange zest; alternatively, use grapefruit or lemon zest.

This option will provide more bitterness than what you would get from a jam or preserve. Zest won't be appropriate if you need a marmalade alternative to use as a glaze. 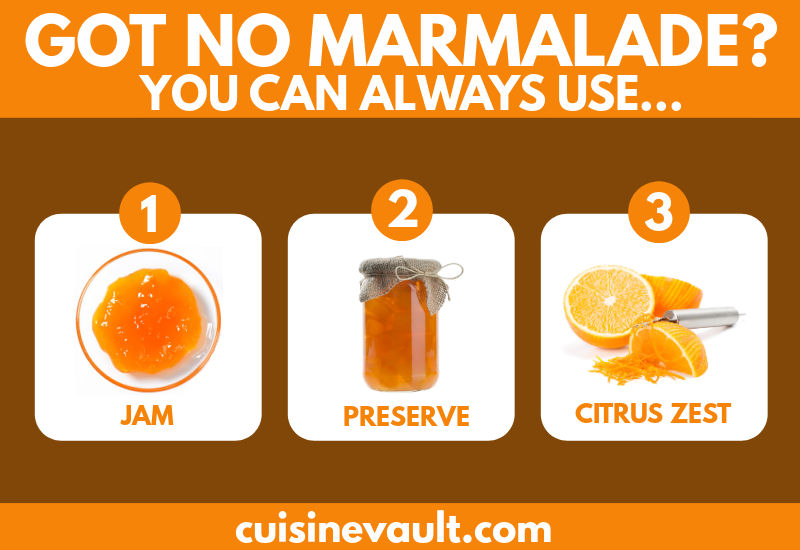 Chutney is an everyday item at the supermarket, but it is also easy to make at home. Cook mangoes, sugar, onions, mustard, white vinegar, and ginger on a low heat until the fruit softens. This sauce is excellent for savory applications like flavoring curries or coating roast meat. For spreading onto toast or using in sweet recipes like ice cream or puddings, you're better to use jam or a preserve.

In a pinch, you could use orange juice as a substitute for marmalade; however, this will only work in limited recipes where the liquid won't ruin the dish. Some good options for using juice include sauces and marinades. To help intensify the juice’s flavor and thicken its texture you can reduce the liquid in a small saucepan before adding it to the other ingredients.

If you enjoy marmalade but can't find any at your local store then making a batch at home is an excellent option. 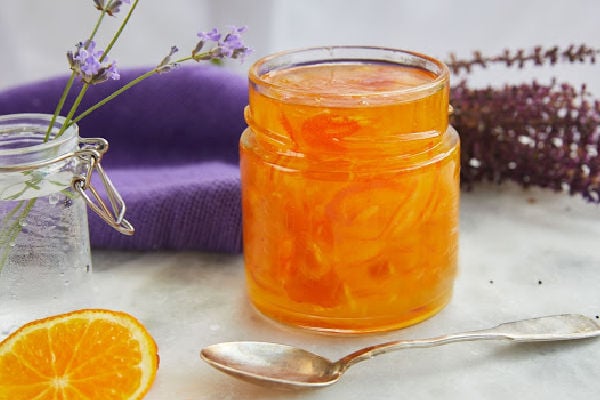 Orange marmalade has a sweet, citrusy taste but it is different from jam thanks to its strong bitter flavor which comes from the use of rind.

What is marmalade used for?

The most common use for marmalade is spreading onto scones or toast. It is a versatile ingredient that can be used in sweet recipes like cakes and puddings. Marmalade can also be spread between layers of cake or pancakes for extra sweetness and flavor. In savory dishes, marmalade adds a sweet and bitter taste to meat and poultry rubs and is delicious incorporated into homemade barbecue sauce.

Although marmalade is a common ingredient in some parts of the world, you may not be able to find it at your local store. If you're having trouble locating a jar or you simply don't like the taste, then use jam or preserve as a tasty substitute. Citrus zest is great for adding a similar flavor without the sugar.

To get the authentic taste of marmalade then you’ll do well to make your own at home. Get yourself some citrus fruit and preserving jars then follow our simple recipe above for a delicious tasting condiment.

What recipe are you currently working on that calls for marmalade? Please let us know in the comments below.