This keto moussaka is low-carb, gluten-free, and insanely flavorful. Yes, you will need an hour to cook this dish, and it may seem a bit tricky to make it, but the outcome is definitely worth the effort.

This dish consists of layers of fried eggplant with a delicious meat sauce topped with homemade low-carb bechamel sauce. You can use any kind of ground meat to make the sauce, but I do recommend sticking with beef.

If you’re craving delicious homemade comfort food, then this low-carb version of the Greek moussaka hits the spot. The traditional version of the dish has about 30g net carbs, so I had to make some changes to make it more keto-friendly.

Moussaka is a traditional Greek dish. When it first made its appearance, it was a fairly simple dish consisting mainly of vegetables and meat. Then after some time, bechamel sauce also became a part of it.

This dish is quite similar to lasagna. One can even say that moussaka is to Greeks what lasagna is to Italians. It consists of fried eggplant layers (just like pasta sheets in lasagna) and a rich tomato meat sauce. Traditionally, this dish requires either ground beef or ground lamb for the meat sauce.

Traditional moussaka is not keto-friendly mainly because of the bechamel sauce. The main ingredient in the sauce is flour, which is definitely not a keto product. Also, some like to layer the moussaka with potato slices. In that case, the number of carbs in the dish skyrockets.

So to make moussaka keto compatible, I had to make some changes, which include making a low-carb bechamel sauce, skipping the potatoes, and using the right ingredients.

How to Make Low-Carb Moussaka

This keto moussaka consists of mainly three layers—the eggplant base, the tomato meat sauce, and the bechamel sauce. To make it, you’ll need the following ingredients:

And that’s it! For a more detailed description of the exact amount of ingredients needed for this recipe and for the cooking instructions, check out the recipe card below.

There are four main steps to making the moussaka:

What Baking Dish to Use?

For this moussaka recipe, I used a 9 x 12-inch baking dish. However, if you want the moussaka to be thicker and have more layers, you can definitely use a smaller baking dish. With that in mind, I don’t recommend using a larger one since the moussaka will turn out too thin. If you have a larger dish, you might want to use more ingredients.

From the ingredients in this recipe, you make a moussaka that can be divided into eight servings, so there might be some leftovers. Keep in mind that you can store the keto moussaka leftovers in your refrigerator for 3-4 days. Whenever you wish to serve it, simply place a slice of the moussaka in your microwave for a minute or two to reheat.

If you want to make this moussaka beforehand and freeze it, you definitely can. Simply follow the instructions, assemble the moussaka, wrap it with food wrap, and place it in the freezer. Then whenever you want to cook it, place the baking dish with the moussaka in the oven preheated to 350 F, and bake for 50 minutes. Or, you can also cook the dish first before freezing it.

My favorite way of serving this low-carb moussaka is with a salad made of chopped tomatoes, cucumbers, parsley, and with a vinaigrette salad dressing. There is definitely nothing that would taste better than a fresh salad with this dish.

Or, if you're craving a nice loaf of crusty bread, you can also toast a slice of the keto feta bread. 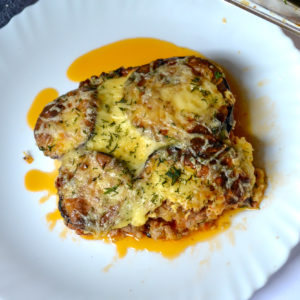