This keto eggnog recipe is sugar-free, low-carb, vegetarian, and takes only 20 minutes to make. It tastes exactly the same as the traditional eggnog, except healthier. And the best thing about this eggnog is that it has less than 1 gram of carbs per serving. 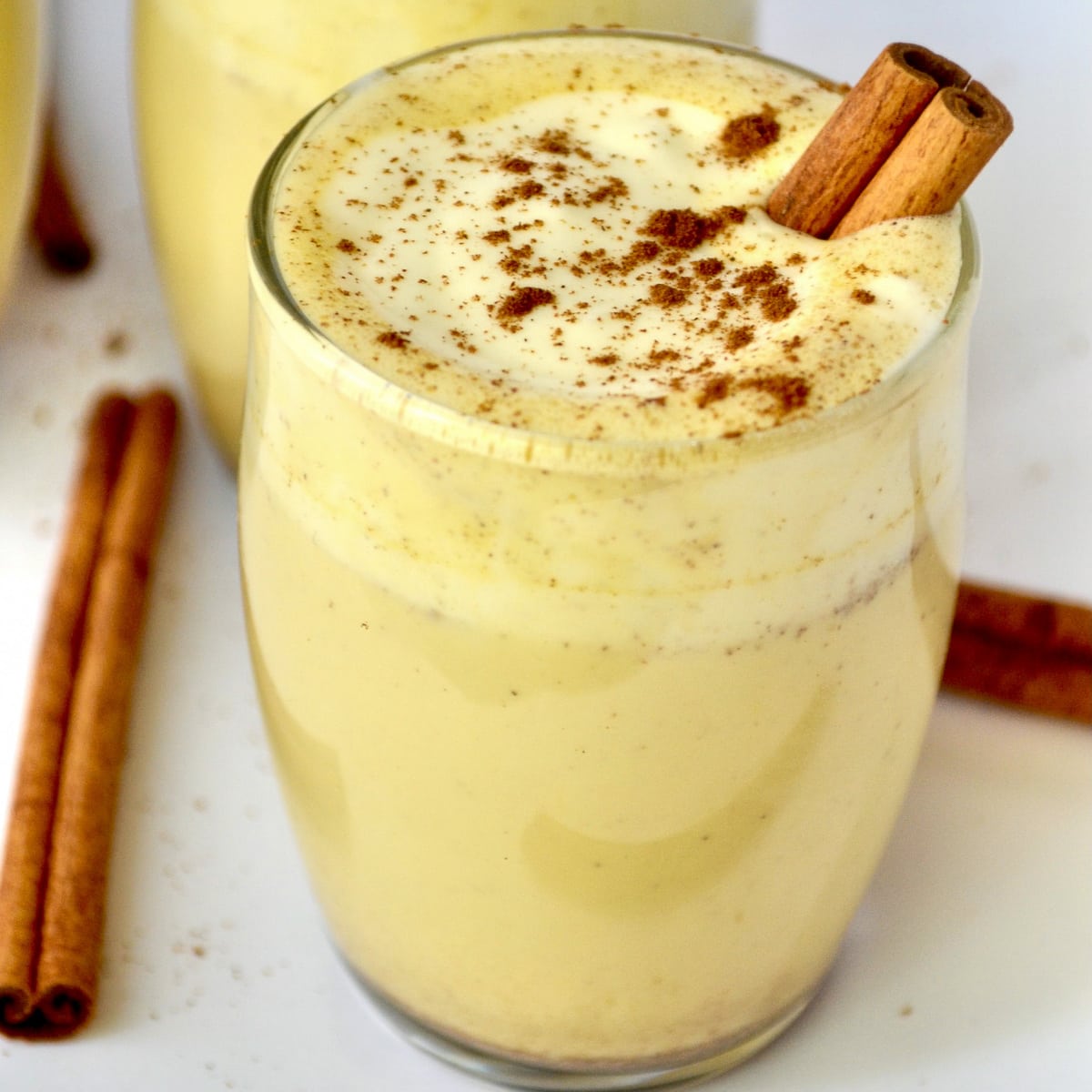 The season doesn’t matter; you can make this delicious drink at any time of the year. And you can enjoy it either hot or cold—it is incredible in both ways.

The texture of this low-carb eggnog is also ideal: it’s thick, creamy, and at the same time, isn’t too heavy. Even though there’s no sugar in it, it is just as sweet as the real thing, and thanks to some nutmeg and cinnamon, it is also slightly spicy—just how the traditional eggnog should be.

Just to be clear, the traditional eggnog recipe is much higher in carbs and calories than this one. Usually, one cup of eggnog has around 20 grams of carbs, making it completely unsuitable for those following the keto diet.

But, one serving of my low-carb eggnog recipe has less than 1 gram of carbs and 239 calories,  which is quite impressive. So, if you are trying to stick to the low-carb lifestyle, this eggnog recipe is the one that you should go with.

How to Make Low Carb Eggnog

And there you have it. With these simple ingredients and just a bit of effort, you’ll be able to make the most delicious low-carb eggnog. As you might’ve already noticed, I went for a healthy alternative to the traditional eggnog, so there is no alcohol in the recipe.

The keto eggnog cooking process is quite similar to the usual one. Let me walk you through the main steps:

That’s it. Once done, you can put your eggnog in the fridge to thicken up.

It’s okay to store this eggnog in the fridge for up to 2-3 days. Whenever you wish to serve the eggnog, you can either pour it into glasses and serve cold right out of the fridge or reheat for a minute or two in the microwave.

Also, this keto eggnog is freezer-friendly. So, if you have too much of the eggnog left and you don’t want it to go to waste, you can freeze it. It can be kept in the freezer for 6 months. Just remember to place it in a container that has free space left since the eggnog will slightly expand when it freezes.

My favorite way of serving this low-carb eggnog is the traditional way—with some whipped cream on the top. Also, since it pairs perfectly with pastry and cookies, you should definitely try serving it with a low-carb brownie or some no-bake coconut cookies.

Personally, I think that this keto eggnog will pair up ideally with some oven-baked almond flour cookies. The best part about serving it this way is that you’ll be able to dip these cookies into the eggnog. 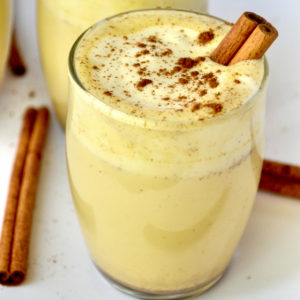 This keto eggnog recipe is sugar-free, low-carb, vegetarian, and takes only 20 minutes to make. It tastes exactly the same as the traditional eggnog, except healthier. And the best thing about this eggnog is that it has less than 1 gram of carbs per serving.
5 from 6 votes
Print Recipe Pin Recipe
Prep Time 5 mins
Cook Time 15 mins
Total Time 20 mins
Course Drinks
Cuisine British
Servings 3
Calories 239 kcal