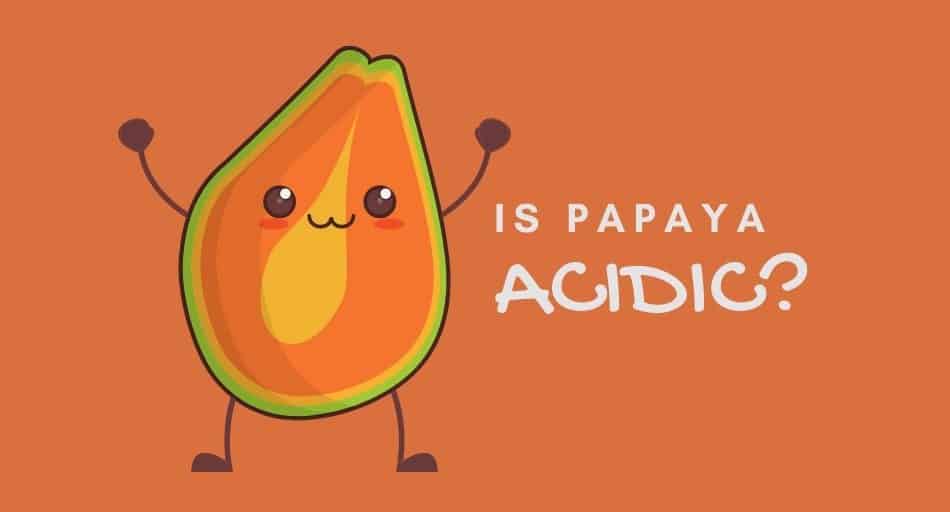 As wonderful as fruit is for us, sometimes fruits have some negative attributes, like being acidic. When you eat and drink overly acidic things, it can damage the enamel on your teeth, cause acid reflux and heartburn.

None of these things are fun to deal with, which is why knowing what's acidic and what's alkaline are important to help prevent you from feeling heartburn. Papayas are one of the most delicious and juicy fruits.

Whether you're eating the fruit as is or enjoying a glass of freshly squeezed juice, you can't go wrong. But is papaya acidic?

Papayas are technically an acidic fruit. Since they have a pH that's lower than 7, they fall under an acidic classification. The good news is that papayas have a pH of about 5.5 to 5.9. Since their pH rating is so close to being neutral, they're a lot safer for those who suffer from acid reflux and heartburn to eat. They're one of the least acidic fruits, making them a perfect choice for everyone.

Are Papayas Good for You?

Besides being one of the least acidic fruits, papayas have plenty of other health benefits you may want to know about. Papayas are rich in nutrients, like many other fruits. Some of the key vitamins you'll find in these fruits include vitamin C, vitamin E, and vitamin A.

Something a little different about papaya is that it's rich in beta-carotene. There's research that shows those who consume a lot of beta-carotene are at a lower risk for developing asthma. This same antioxidant that can help reduce your risk of asthma can also reduce your chances of developing certain types of cancer.

Papaya is great for your digestive system! Not only is this fruit rich in fiber which helps to prevent constipation and help things move smoothly, but it's also rich in papain. Papain is often used as a meat tenderizer, but when you eat it, it helps to aid in the digestion of food.

While people in the United States and Central America call papayas, papayas, that's not what they're called all over the world. Check out some of the other common names for papayas:

RELATED: Is Mustard Acidic or Alkaline?

Where Are Papayas Originally From?

Most of us probably get most of our fruit from the local grocery store or maybe even the farmer's market. But it's always interesting to learn about where your favorite fruits originated from.

Papayas, while grown in many parts of the world now, originated in Mesoamerica. It's thought that it originally came from what we now know as Southern Mexico.

There's no concrete proof that its origins are from Mesoamerica, but with what information historians do have, it's assumed by many that it's true. To give you an idea of how long ago Mesoamerica existed and when papayas possibly were discovered, Mesoamerica began in 1200 BC.

It's said that while these ancient civilizations would eat the papayas for food, they were also used for a variety of medicinal reasons.

Because of its components that make your digestive system run smoothly, it was commonly used to prevent gastrointestinal issues back in the day.

What Country Produces the Most Papayas?

Even though papayas are said to have originated in Southern Mexico, Mexico is no longer the largest producer of papayas in the world. The country that leads the world in papaya production is India. Following behind India are Brazil, Nigeria, Indonesia, and Mexico.

If you're wondering where the United States falls on the global papaya production map, they only account for about 0.1% of the world's papaya crops.

Are There Different Types of Papayas?

There are! There are two different types of papayas in the world, the Hawaiian Papaya, and Mexican Papaya. If you see papayas in your grocery store, you most likely see Hawaiian papayas.

Can You Eat Papaya Seeds?

You definitely can. If you're interested in trying papaya seeds, be prepared that they're not going to taste like the delicious fruit you're also eating. I've never eaten papaya seeds, but many people say that the black seeds taste like pepper, from what I can tell.

If you love pepper, then you may love this. In some countries, people use papaya seeds in place of peppercorns in many dishes.

Adding Papaya to More of Your Diet

I'll be honest; papayas aren't the first fruit I'm grabbing when I walk into the produce section. As delicious as they are, they can be a little intimidating if you don't eat them often. If you want to add more papaya to your diet, here are some great options.

One of the most delicious ways to enjoy papaya is to wrap slices of prosciutto around slices of papaya. Many people do this with cantaloupe melon, but papaya is just as delicious of an option. If you want to take it a little further, drizzling balsamic glaze or lime juice over the prosciutto-wrapped papaya is fantastic.

It's a perfect appetizer to bring to a potluck or for bringing as a snack for yourself at work.

I think it's safe to say that everyone loves dessert. If you're looking for a reasonably healthy dessert, you need to try this. You'll need mature papaya and then cut it into fourths. You'll place it in a baking dish and sprinkle it with sugar and cinnamon. You'll bake for about 35 minutes and then serve it hot. It's very tasty.