Even though sea moss is not usually on the list of the most popular seaweeds, it is a great source of antioxidants, vitamins, minerals, and essential fatty acids. This seaweed is popular in Ireland, where it got its common name, "Irish sea moss." Since sea moss is an organic product, you should expect it to go bad even when properly stored. 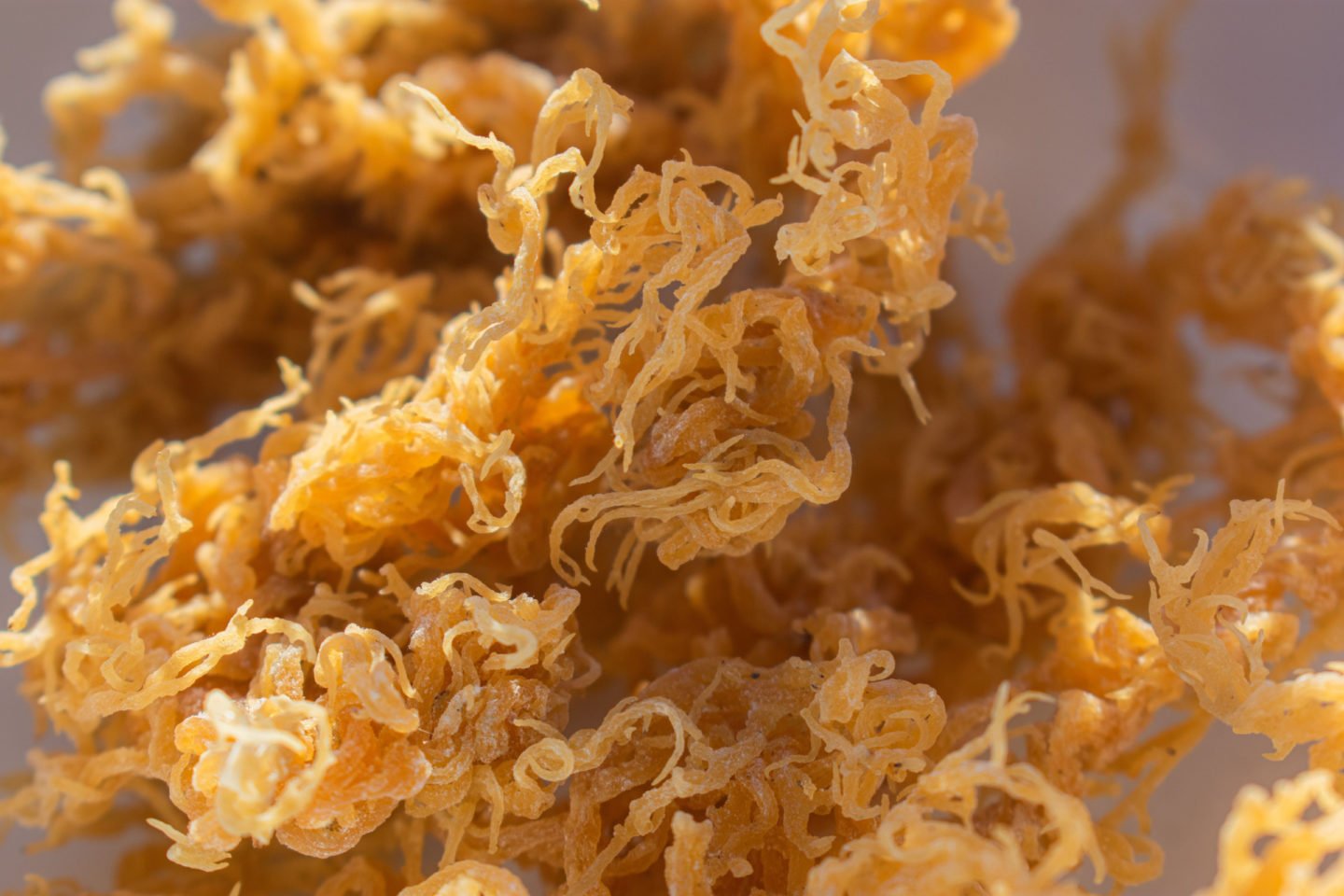 Raw, dried sea moss lasts at room temperature for about three months and up to one year when stored in a cool, dry place. How long your sea moss will last depends a lot on how wet it is; the more wet it is, the shorter its shelf life.

Gel sea moss has a shorter shelf life, as it only lasts about one month in the refrigerator but lasts up to 6 months when frozen. Read on to learn everything you need to know about sea moss' shelf life, storage tips, and when your sea moss has gone bad.

What is Sea Moss?

Sea moss is a type of seaweed found in both the Pacific and Atlantic oceans. Even though it's not as well-known as some other types of seaweed, sea moss has been used for many years as a natural way to treat a number of health problems. It is a rich source of antioxidants, vitamins, minerals, and vital fatty acids.

Among the most well-known sea mosses is Irish sea moss, also known as carrageenan moss or red algae. Chondrus crispus is the scientific name for this moss. It is a red algae that has long been used to thicken milk products like ice cream. When in powder form, cooks use it to thicken soups, smoothies, and other foods that need natural thickening agents.

How is Sea Moss Made?

Sea moss occurs naturally in the Atlantic and Pacific oceans. However, to help preserve it, manufacturers process soaked sea moss into a gel form, powder, or dried sea moss. Sea moss is often used in facial serums and food supplements like gummies and capsules because it is high in antioxidants.

Yes. Since sea moss is a natural product, it eventually goes bad, even when properly stored. Once the sea moss has been processed, however, the expiration date will depend on the type of product made and the notes from the manufacturer. Although sea moss deteriorates naturally, some practices either hasten or prolong the process.

How Long Does Sea Moss Last?

Raw sea moss deteriorates the fastest among all sea moss products. Due to its moisture content, raw sea moss goes bad within 2-3 weeks of refrigeration. To preserve your raw sea moss, you can place it in ziplock bags and freeze it. Doing this extends the shelf life by up to 3 months.

But keep in mind that once you open the bag, you let in moisture and bacteria, which makes the food go bad faster. As a result, I recommend putting sea moss in Ziploc bags only large enough for a single use.

Sea moss powder is one of the most common commercial forms of sea moss. Although this is more expensive than other sea moss products, it tends to have a longer shelf life. When stored correctly, sea moss powder usually lasts between two and three years. This is because it contains other ingredients that keep moisture from building up and make it last longer.

Also, the shelf life of sea moss powder depends on the company that makes it. Some can last forever, especially if they haven't been opened.

Sea moss in gel form, also known as Irish moss paste, is among the common products you can buy online and in your local stores. Once sealed in the refrigerator, sea moss in gel form remains viable for one month or over three months when frozen. Most sea moss gels are made from raw sea moss that has been soaked, so they don't have any additives and don't last as long as dried or powdered ones.

Sea moss serums improve the health of the skin by adding antioxidants and antimicrobial compounds that keep acne and skin irritation from happening. Since these products are packed in capsules to keep out moisture and have extra preservatives, the expiration date depends on what the manufacturer says. Just make sure to buy ones with printed expiry dates to avoid confusion.

Like sea moss capsules, sea moss gummies have different shelf lives depending on the manufacturer. Most sea moss gummies last up to two years, but they are prone to melting, especially when stored in a humid place, shortening their shelf life.

Sea moss serums improve the health of the skin by adding antioxidants and antimicrobial compounds that keep acne and skin irritation from happening. While this still depends on the manufacturer, most serum products last up to 2 years when unopened. However, you have six months to utilize the serum once it's opened.

How to Tell If Sea Moss is Bad

Since sea moss has its own natural color, the first way to tell if it has gone bad is to look at its color. As a rule of thumb, the sea moss's color darkens when it turns bad or expires. This is true for gold sea moss, purple sea moss, green sea moss, red sea moss, or Irish sea moss.

The smell is another great indicator for identifying spoiled sea moss. Although raw sea moss has a naturally slightly fishy and sea-like smell, it develops a strong fishy scent and a foul odor once it's spoiled. Once you notice the foul odor when smelling the container or plastic that it comes in, it's a good idea to toss it out.

Even without the fishy or foul smell, spoiled sea moss often develops a sour scent, like the ones you smell with rotten meat or vegetables. When this happens, avoid using the sea moss.

Even though fresh sea moss is slimy by nature, extra slime is a sign that it is going bad and needs to be checked. When a gel sea moss goes bad, the extra gel or water that comes from it usually rises to the top of the container. Once you notice this, give your sea moss gel a quick sniff to confirm your suspicion.

Another great thing to consider is the appearance of mold. Molds grow on moist surfaces like sea moss, making them one of the most common causes of shortened shelf life. Molds often appear as green, light gray, or white blooms on your sea moss's surface or sides. If you start seeing growth like the ones you see on spoiled fruits and vegetables, that's a sign that the sea moss has spoiled.

Top 3 Ways to Extend the Shelf Life of Sea Moss

Storage is the most important thing to consider if you want to extend sea moss shelf life. Store it in a cool, dry place where it won't gather moisture. Even though freezing sea moss helps it last longer, you have to use it right away because thawing it adds moisture.

3. Keep Humidity and Heat at Bay

Heat and humidity damage the integrity of sea moss. Heat turns sea moss to gel, while humidity results in moisture that damages your sea moss. Keep the sea moss in a cool, dry place to prevent this.

What Happens If You Eat Expired Sea Moss?

You might not always become sick if you eat expired or spoiled sea moss. However, it depends on what caused the spoilage. You can expect mild symptoms like gassiness, abdominal discomfort, diarrhea, nausea, vomiting, and fatigue or tiredness.

Moreover, if certain microorganisms cause spoilage, you may experience worse symptoms.

Sea moss is a nutrient-dense food. Aside from being a low-caloric food, sea moss is rich in vitamin A, vitamin K, riboflavin, folate, and minerals like calcium, iron, magnesium, phosphorus, zinc, copper, and manganese. Moreover, sea moss is an excellent source of iodine, with 47 mg of iodine per gram of sea moss.

Sea moss is also a great source of amino acids, which are protein-building blocks. In a study, sea moss demonstrated the presence of arginine, glycine, threonine, and citrulline. Lastly, sea moss is one of the best plant sources of omega-3 fatty acids.

Sea moss supplements are excellent for weight loss. It contains essential vitamins and minerals with low calories. Sea moss is also a great addition to your diet if you have thyroid problems like hypothyroidism, as it stimulates the production of thyroid hormones. Aside from that, sea moss strengthens the immune system, helps keep the gut healthy, and contains antioxidants that stop cells from aging and cancer before they should.

Even though it is safe to eat sea moss, it has a lot of heavy metals and trace elements that could mess up how your body works. Moreover, avoid including sea moss in your diet if you have hyperthyroidism.

How long does it take sea moss to spoil?

Raw sea moss spoils in about three weeks in the refrigerator, while dry sea moss lasts up to a year when stored properly. Sea moss gel lasts a month, while other sea moss products like sea moss powder, capsules, and gummies last more than a year, depending on the manufacturer's notes.

How long can sea moss last in the fridge?

When refrigerated, raw sea moss lasts about a month. However, this still varies depending on how often you open the container.

Is sea moss the same as Eucheuma cottonii?

Eucheuma cottonii, also known as "guso," is a type of sea moss commonly found in the Philippines. Eucheuma cottonii is a soft sea moss that can be eaten. It is usually blanched and then eaten with salt and vinegar.