Golden Corral is the godfather of pot roasts. Founded in North Carolina back in 1973, this fast-food chain specializes in buffet and grill-style food in a family-friendly environment.

The Golden Corral pot roast is well known for being tender and full of flavor. The meat melts in your mouth. So wouldn't it be good to make your own at home? As you'd expect, the official recipe is kept under lock and key with very few exposed to the exact details. But that doesn't stop us from creating our own masterpiece of a meal at home that's just as good as the original. 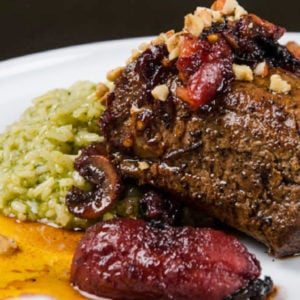 Keyword golden corral pot roast, pot roast
Tried this recipe?Let us know how it was!

It's true, the steps required to cook a pot roast are very simple. So why do so many fail to live up to expectations? There are a few reasons - so let's look at how you can make an aromatic, tender roast every time.

Forget about those expensive cuts of ribeye that'll dry out when cooked all day. You want to find a really cheap chuck roast that has plenty of fat. This cut of meat would be a disaster fried, but slow cooking causes the fat and meat tissue to break down magically.

Hint: Cut off any large chunks of fat but keep everything else.

After several hours, the fat, tendons and tough muscle tissue will break down and form a thick gelatinous liquid that is packed with umami flavor from the beef. Later, you'll discover how to use this for the perfect sauce.

2. Sear to seal the goodness

Another word for searing is browning. Heating a pan and searing the meat on all sides seals in the flavor and juices and caramelizes the outside of the meat. This process is known as the Maillard Reaction - a technical term for making meat taste very good!

Don't overdo the searing process. You want to briefly brown each side, if you leave it on the pan too long you'll cook the meat which isn't what you want.

3. Low and slow is your path to perfect meat

Time is your friend when it comes to slow cooking. Rushing the cooking process won't help. Your goal should be to cook on a low heat for around 8-10 hours. This will vary depending on the size of your meat and the slow cooker you use. After 6 hours test the meat by trying to pull it apart. If it begins to pull away easily then it's ready; if it still feels a little tough, keep cooking.

Hint 1: Avoid the temptation to remove the lid and test the meat throughout the day. Just leave it and trust that the end result will be delicious.

Hint 2: A slow cooker doesn't require much water when cooking meat so avoid the temptation to add lots of water at the start.

Hint 3: Keep the lid on tight, not slightly off. You don't want any steam to be released as this will contribute to dry meat.

Once you remove the meat and vegetables from the slow cooker, you'll notice leftover bits of meat and some liquid that doesn't look very appealing. This is the beginning of your gravy.

Scrape all the leftovers into a frying pan and begin heating on a medium heat. Add a cup of beef stock and continue heating. As the liquid heats, mix 1 Tbsp of cornflour with a little water so that it makes a slurry. Whisk this mixture into your gravy to help thicken it up. Use this sauce resource to learn more about making the perfect gravy.

To add some additional depth of flavor to your gravy, add a cup of red wine, a splash of lemon or vinegar, and some salt and pepper to season.

Cooking a Golden Corral pot roast is well worth the effort. Even a novice chef could easily follow this recipe, so long as the tips are also followed. The biggest challenge to making a good pot roast is time: you need to be organised and have all your ingredients ready to go early in the morning. Then it's simply a case of tossing everything into the slow cooker and letting it work its magic on the meat.

I can't stress how important it is to buy a cheap cut of meat with plenty of fat content. No matter how well you cook the meat, quality lean beef will dry out if cooked all day.

Admittedly, cooking the Golden Corral version is tricky to achieve the exact same flavor. However, you will be able to make a version that's just as tender - I'm talking "melt in your mouth" style meat!

Do you have a favorite recipe for cooking a pot roast? Let us know in the comments.