Looking for something sweet to do with your morning tea or coffee? Make this keto cinnamon bread! It's insanely moist, vanilla-flavored, and has the perfect cinnamon swirl in the center of the bread.

This keto cinnamon bread is not only low-carb but also gluten-free, paleo-friendly, and can even be made dairy-free with one small little change in the recipe. The best part about it is that one slice of this cinnamon bread contains just 7 grams of carbs, therefore allowing you to include it into your diet without any harm.

And if you think that keto dessert can't be as good as the sugar-loaded type, you're entirely wrong. The truth is it the opposite - not only is it delicious and sweet, but also absolutely healthy.

Can You Have Cinnamon on Keto?

Yes, definitely! It is a great low-carb spice that can be safely added to your keto dessert. In fact, it is strongly encouraged to add cinnamon to your diet since it brings many amazing health benefits.

Here are some advantages to including cinnamon in your meals:

So cinnamon won't kick you out of ketosis but only bring benefits to your health and diet.

Yes and no. Everything depends on the type of bread you're thinking about. There are lots of store-bought keto bread types that not only don't do anything good for you but may even cause harm. So if you choose to buy keto bread at a store, always double-check the label to make sure that there are no harmful ingredients listed.

However, if you choose to make your own keto bread (for example, this keto cinnamon swirl bread), then you can be sure that it is completely healthy and will have a great effect on your weight loss journey.

If you like this keto quick bread recipe, then give it a try to this keto feta bread and this amazing keto bread for French toast recipe.

To make this keto cinnamon bread, you should prepare 12 healthy and simple ingredients. When you buy everything and are ready to start cooking, it is best to measure each ingredient in a separate small bowl to make it easier to follow the recipe instructions and to make sure you don't skip an important ingredient.

Here's what you need for this low carb cinnamon bread recipe:

The best part about this keto bread recipe is that there's no xanthan gum in it.

That's it! When you prepare all of these ingredients, you can move on to the main process.

Let your keto cinnamon bread cool down completely before slicing it and placing it into the refrigerator. You can store the bread in your fridge for up to 3-4 days. Just make sure that you either place it in an airtight container, a ziplock bag, or cover it with plastic food wrap.

Also, this low-carb cinnamon bread is freezer-friendly. You can store it in your freezer for up to 3 months. Then, whenever you want to serve it for lunch or dinner, simply thaw the bread slices in your refrigerator overnight or use your microwave for the job. 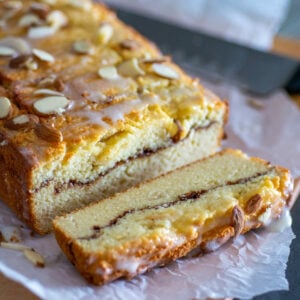 This keto cinnamon bread is not only low-carb but also gluten-free, paleo-friendly, and can even be made dairy-free with one small little change in the recipe. The best part about it is that one slice of this cinnamon bread contains just 7 grams of carbs, therefore allowing you to include it into your diet without issue.
5 from 3 votes
Print Recipe Pin Recipe
Prep Time 10 mins
Cook Time 50 mins
Total Time 1 hr
Course Dessert
Cuisine American
Servings 12 slices
Calories 225 kcal

For the cinnamon swirl: