Epazote is a herb that is often used in Caribbean and Mexican cuisine. It is excellent for adding earthy, pungent flavor to food with a subtle taste of anise. This ingredient is useful in stews and soups but is best known for its use in beans - it can “alleviate” the gaseous effects of this dish.

The epazote herb is a lot like cilantro. Some love it, others loathe it. People even go as far as to say that it tastes like gasoline! If you don't enjoy the taste of it or you can't find it where you live, then you're going to need an alternative. We've pulled together a collection of our favorite epazote substitutes so that you can finish any recipe without the original ingredient.

What can I use to replace epazote leaf?

If you've got no fresh epazote then your next best option is to use one-third the amount of the dried variety. The flavor won’t be as good, but it is the closest you will get to the real thing. The next best alternatives are cilantro, papalo, summer savory, or fennel. They won't perfectly mimic the taste, but these replacements won't be out of place in most Mexican recipes. Mexican oregano, flat-leaf parsley, or lemon verbena will also work if you're in a pinch.

Cilantro, or coriander, has a distinct flavor that some consider bright and lemony while others describe it as metallic and soapy. Its unique taste won’t mimic epazote, but Mexicans consider it an acceptable substitute. Add cilantro to soups, beans, and other slow-cooked food, or sprinkle it into tortillas and tacos to add freshness.

When comparing their flavor, you’ll find that they both share a similar citrus undertone, but epazote is much more bitter.

Finding fresh cilantro at grocery stores in the United States is much easier than sourcing epazote. Use in equal quantities as you’d use the original herb.

Papalo has a flavor that’s a cross between cilantro and arugula. It has a strong bitter overtone with subtle lime notes. Like cilantro, this ingredient has a different flavor profile to epazote, but it can be used in the same applications. Salsa, carne asada, and chili are great options for chopped papalo, or sprinkle it over dishes as a garnish. Add it towards the end of cooking as it tends to lose its flavor when over-cooked.

Choosing young leaves is essential as the mature ones develop an overwhelming bitter taste that can spoil your food. You may find it difficult to find, so search for a local Mexican market and you could get lucky.

We suggest using half the amount of papalo to avoid any awkward flavors. You can always sprinkle on extra when serving if you think it needs it.

Did you know? Papalo offers similar digestive benefits as epazote.

Summer savory is a useful epazote replacement and is wonderful paired with beans, meat, and mild food that you don’t want to overwhelm with flavor. This herb is hot and peppery but isn’t as potent or bitter as the winter variety.

To use fresh summer savory, we recommend adding equal amounts as you would epazote. 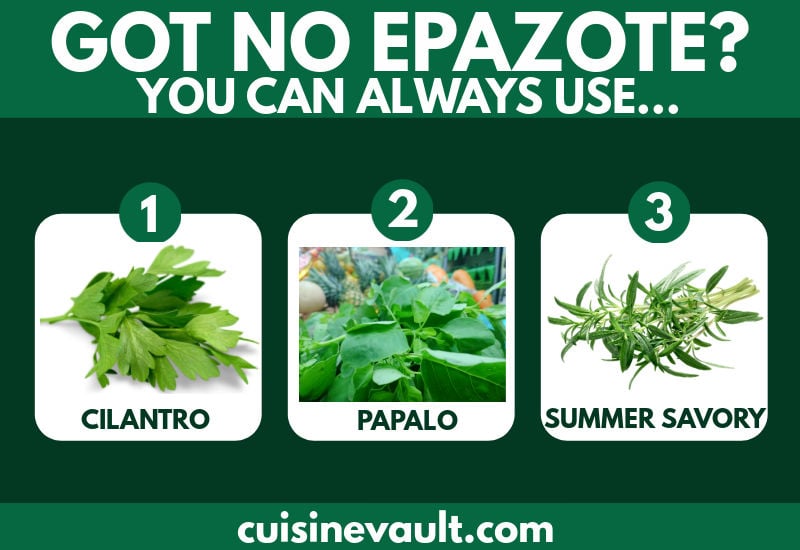 Fennel provides a more subtle flavor and won’t overwhelm the ingredients it is added to. It makes a handy substitute thanks to its anise flavor, which can also be tasted in epazote. Fennel also offers digestive benefits; a common reason people add epazote to their food.

Fennel is an everyday vegetable that can be found in most supermarkets. When using this plant, a 1:1 ratio is recommended, then taste test and add more if you think it’s necessary.

Mexican oregano is another herb that brings lemon and licorice flavors that work deliciously well in Tex-Mex and Mexican cuisine. If your recipe calls for epazote on chili peppers, soup, chili con carne, or salsa then Mexican Oregano will make a great alternative. It doesn’t have the same taste, but it won’t detract from the dish's authenticity, especially if you’re making Mexican food.

To round out the flavor, add a little boldo for enhanced bitterness. This will take your substitute combination of herbs closer to the flavor you’re trying to replicate.

Use equal quantities of Mexican oregano as you’d use epazote in recipes.

For an easy-to-find replacement that brightens heavy dishes without adding a lot of flavor, parsley is a great option. It won’t bring the same pungent bitterness and will appeal to kids and others who don’t enjoy strong flavors.

Use flat-leaf parsley in equal or greater quantities than you’d use epazote. It is a good option for sprinkling over tacos.

Culantro has a range of common names including recao, ngò gai, long coriander, Mexican coriander, and shadow beni. Culantro and cilantro are from the same family and have a similar bitter, citrusy flavor, although culantro is much stronger.

When culantro is added to slow-cooked food it will retain its flavor much better than cilantro. Use this herb in moderation to avoid overpowering meals.

Lemon verbena makes a refreshing tea that is popular in Mexico, and it has additional medicinal benefits. Its lemon flavor means that it can also be used to replace epazote in savory dishes. This ingredient has a strong lemon kick so use a light hand or your food will be out of balance.

Related reading:
What are some useful dill alternatives?
What are the best substitutes for tomatillo?
Lemon thyme vs thyme - how do they differ?
How do I replace tarragon in cooking?

Epazote is a unique herb that is fairly popular in Mexico but is difficult to find in most other parts of the world. If it’s not available at your local store, then try growing your own. This plant grows like a weed and the biggest challenge will be keeping it under control.

For those that want a quick solution, we suggest using dried epazote to replace the fresh variety. Cilantro, papalo, summer savory, or fennel are also good substitutes.

No herb or spice will exactly match epazote, but it’ll bring a new flavor that should work in most recipes. If you’re not happy with a different taste, forget using a substitute at all. It’s one of those ingredients that won’t make or break the dish.

What are you going to cook that calls for epazote? Please let us know in the comments below.