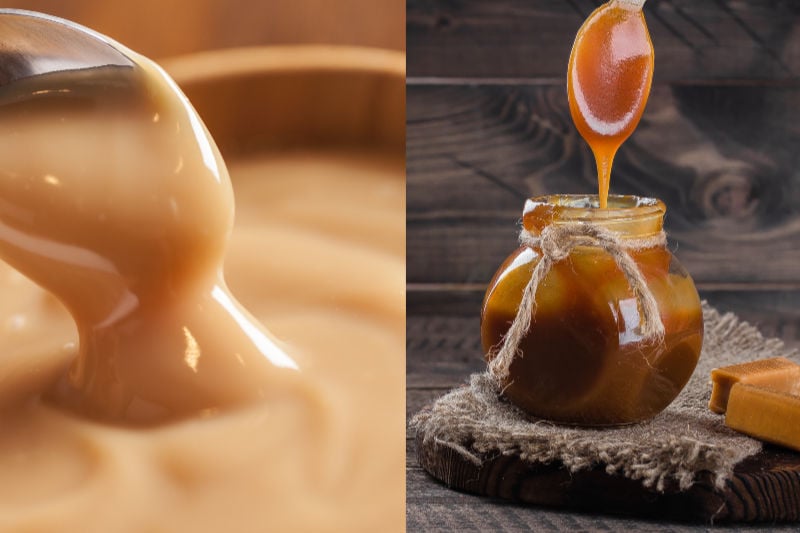 In the United States, if you enjoy the occasional sweet treat, then you’re probably familiar with caramel. Everyone’s had it at some point, right? But dulce de leche is much less known. Many at-home cooks and even chefs think of the two as the same thing. In fairness, they are both light brown colored sweet-tasting sauces, and in most recipes, they can be used interchangeably. But are they really the same? Keep reading as we compare dulce de leche vs caramel. Spoiler alert: no, they are not the same.

Dulce de leche, or “sweet milk,” is a sweet light brown sauce made by heating milk and sugar for around two hours on low heat. The sugar slowly cooks, providing a characteristic golden brown color. The milk provides a slightly runny texture which will thicken when refrigerated. It can also be made by using sweetened condensed milk instead of sugar and milk. Dulce de leche has a sweet, rich flavor that goes well with most dessert dishes. 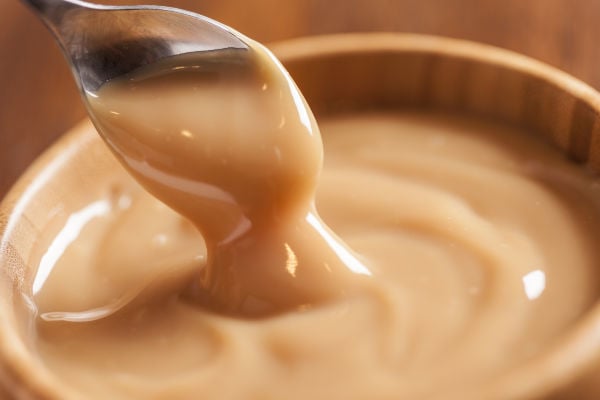 Caramel is made by cooking sugar on a high heat for around 10 minutes until it caramelizes. The color of the liquid could range from light brown to a dark orange shade depending on the cook’s preference and how long they choose to heat it. As the color darkens, the flavor intensifes until it eventually reaches an unpleasant bitter taste. This is a signal that the cooking time was too long.

Usually, extra ingredients such as cream and butter can be added at the end of the cooking process to create a runnier liquid. This extra step makes it ideal for ice cream, trifle, crème brûlée, chocolate bars, and many other dessert and baking recipes. 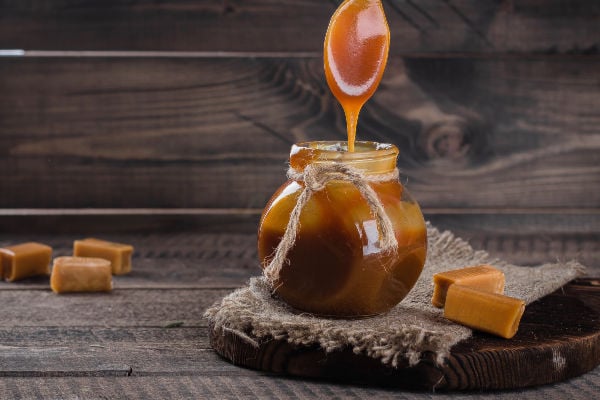 Caramel is a versatile sauce suitable for a wide range of desserts.

Both sauces have a lovely sweet, rich taste with a glossy, thick appearance. In most situations, either of these sauces could be used in a recipe, and most wouldn’t know the difference. For example, if a recipe calls for you to add dulce de leche as ribbons into ice cream, using caramel would be okay.

How do caramel and dulce de leche differ?

There is no universal agreement on who invented Dulce de leche. Most would agree it came from South America in the 1800s, although it is also popular in Spain. Caramel is a much older creation, and there is also disagreement on which country discovered it. A prevailing theory is that the Arabs invented caramel in 1000 A.D¹, initially using it for hair. The name caramel derives from the Spanish word “caramelo.”

Dulce de leche offers a thicker and denser consistency than caramel. When using it as a sauce, you don’t need to use as much for a dessert topping as you would caramel.

Caramel is generally cooked for a much shorter time by heating sugar on its own. Cream and butter get added at the end of the cook. Dulce de leche involves heating milk and sugar for a longer time. This process takes advantage of the Maillard reaction, producing a caramelized end product.

They are both versatile sauces that have an almost unlimited number of uses. 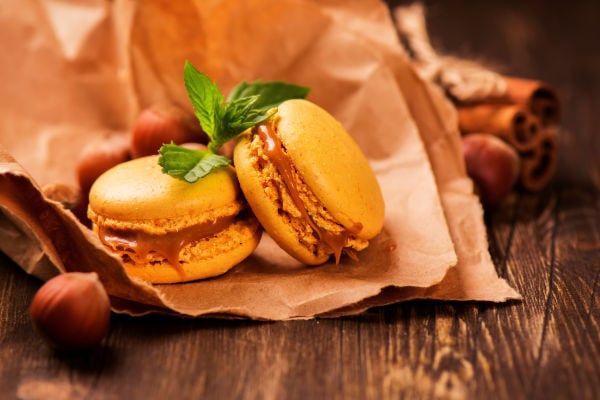 Macarons are amazing filled with caramel.

Dulce de leche: Can be used in any recipe that calls for caramel. In South America, it is spread on toast for breakfast and added to pastries and biscuits.

Can you swap one for the other?

In 99% of recipes, people won’t notice the differences. As a decadent layer in a cake or poured over cookies and ice cream, use either. Do you want to cook an authentic South American, French, or Spanish recipe that calls for dulce de leche? Try to use the correct ingredient and you'll earn cooking karma points. ???? 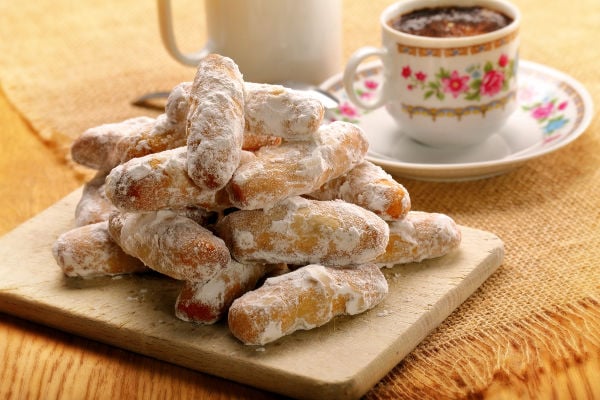 How to make dulce de leche

There’s a very delicious way to make dulce de leche, and the best part is only one ingredient is used. Check out this easy recipe and give it a try!

Quick Tip:
Frequently check the water level to make sure it is above the can. Top the pot up with extra boiling water as required. 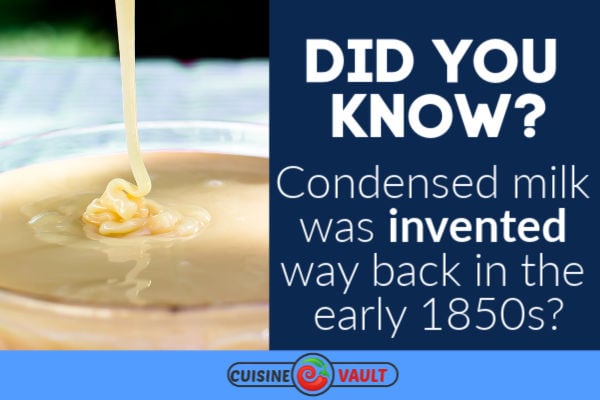 Condensed milk was invented in the 1850s.

Cajeta is a similar confection to dulce de leche, with the main difference being that cajeta is made from sweetened goat’s milk that is caramelized. Dulce de leche uses cow’s milk as its main dairy component. 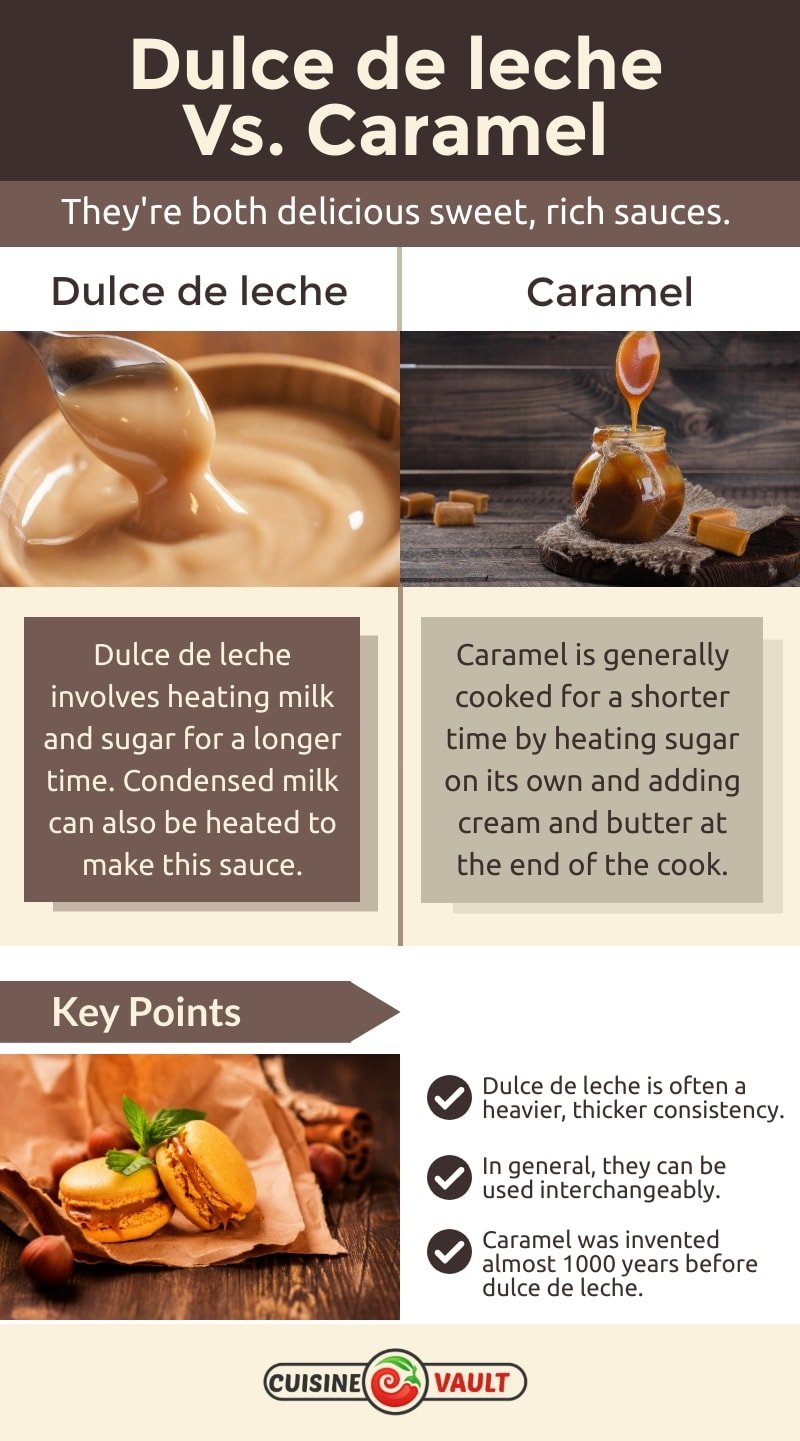 Further reading:
How to keep donuts fresh
A guide to types of chocolate

Caramel and dulce de leche are both popular sauces used in a wide variety of desserts. The tastes of both are popular around the world. In general, they can be used interchangeably in recipes, even though they have their differences.

If you decide to make your version at home, then caramel is the best choice. It is a widely used American food and is quick and easy to make in around 10 minutes. If you’re in a big hurry, there are even recipes online for making microwave caramel that takes 2 minutes to whip up. Perfect if you have an urgent ice cream drizzled in caramel craving.

Have you tried a dish using dulce de leche and caramel? Which do you prefer? Let us know in the comments below.