Are you sitting at a restaurant that's got crocodile on the menu? Maybe you've just discovered it at your local grocery store and are wondering if it's worth your money? To find out what crocodile meat tastes like keep reading to get all the details. We bought croc meat and taste tested it so that you don’t get any unexpected surprises. 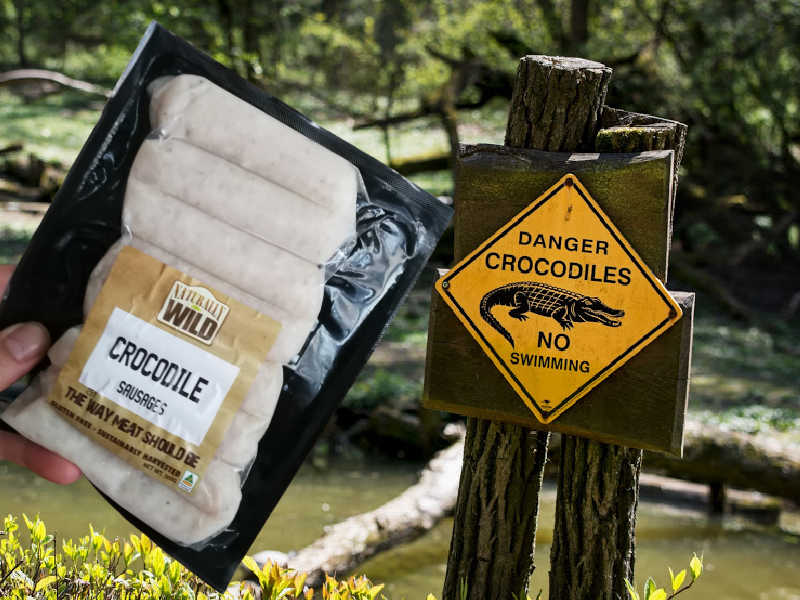 How does crocodile taste?

Crocodile meat is mild in flavor and is often compared to chicken. Depending on where the croc is caught and how it is processed, it may have a slight fishiness. Its white flesh has a firm, tender texture and flakes apart with ease compared to beef or lamb. However, it will not come apart as easily as fish does.

The cut of meat will affect quality significantly. If possible, try to get the tail as this is considered the choicest, tenderest part of the animal. Once cooked, flesh that is still on the bone will fork away easily, a lot like slow-cooked ribs.

Australian saltwater crocodiles are from the porosus family and are revered for their light flavor and clean white meat. It tastes a lot like calamari only less chewy. Try to buy this product if it’s available in your location.

Is your croc sustainably harvested?

In some parts of the world, saltwater crocodiles have drastically lower numbers than they did in the 19th Century. This is brought about for a range of reasons, but the biggest issue is humans poaching them for their skin which fetches a high price. If possible, check that the meat you're buying is CITES approved to ensure sustainable farming is taking place.

Some people find that crocodile is quite chewy and tough. The most common reason is that it has been overcooked. Other types of protein, like seafood, will also turn into leather when left on the heat too long.

If you're cooking this meat at home, we suggest pan-frying it on a high heat for a short time. Two minutes on each side or until it reaches medium-rare is perfect. Allow the crocodile to stand for a couple of minutes before serving.

If you've bought frozen fillets some at-home “chefs” recommend cooking from frozen rather than thawing as it loses moisture and flavor when defrosted.

Special tip: Some people find crocodile has a subtle funky, gamey taste to it. To neutralize this flavor, it is best to soak the fillets for three hours in a pint of milk mixed with one tablespoon of salt. This will result in milder tasting meat and a softer, moister texture.

Crocodile and alligator meat has a similar flavor which is often compared to chicken. However, crocodiles are farmed in seawater, so they take on a subtle fishy undertone, while gator meat has a gamier, swampy taste. Brining the meat of either reptile for several hours in milk and salt will pacify these flavors.

Is crocodile healthy to eat?

Crocodile is considered a healthy food - it is lean meat that is low in fat and high in protein.

• It offers a good source of Omega-3 fatty acids and is high and dietary fiber.
• It contains useful levels of potassium, phosphorus, vitamin B12, and niacin.

Although they’re reptiles, crocodile meat is surprisingly similar to chicken or calamari. When cooked correctly it has a tender, soft texture that is easy to chew.

Is it worth spending a lot of money on? Based on our experience, we don't think so. While the meat doesn't have any pungent or overwhelming flavors, it also doesn't have a "wow factor." Paying extra for blue crab or lobster is a great investment if you're looking for a special treat. But a crocodile doesn't offer a similar mouth-watering food extravaganza. If you can find it for a reasonable price, say something comparable to chicken, it's definitely worth a shot.

The combination of high protein, low-fat meat will make it appealing to bodybuilders and those looking to shred fat. For this group of consumers, it may be good value, even when paying a little extra.

It’s worth pointing out that we tested crocodile sausages and burgers, which have a softer texture than a steak. However, we were still able to get a good idea about meat’s flavor. To get the full picture, we also reached out to one of our online food groups to get their opinions about crocodile meat.