We’ve all been there–standing in the produce aisle, unable to find the last item on our shopping list. If that happens to be cremini mushrooms, you may have to change plans from your pasta or risotto recipe. That is unless you have one of the best cremini mushroom substitutes readily at hand. 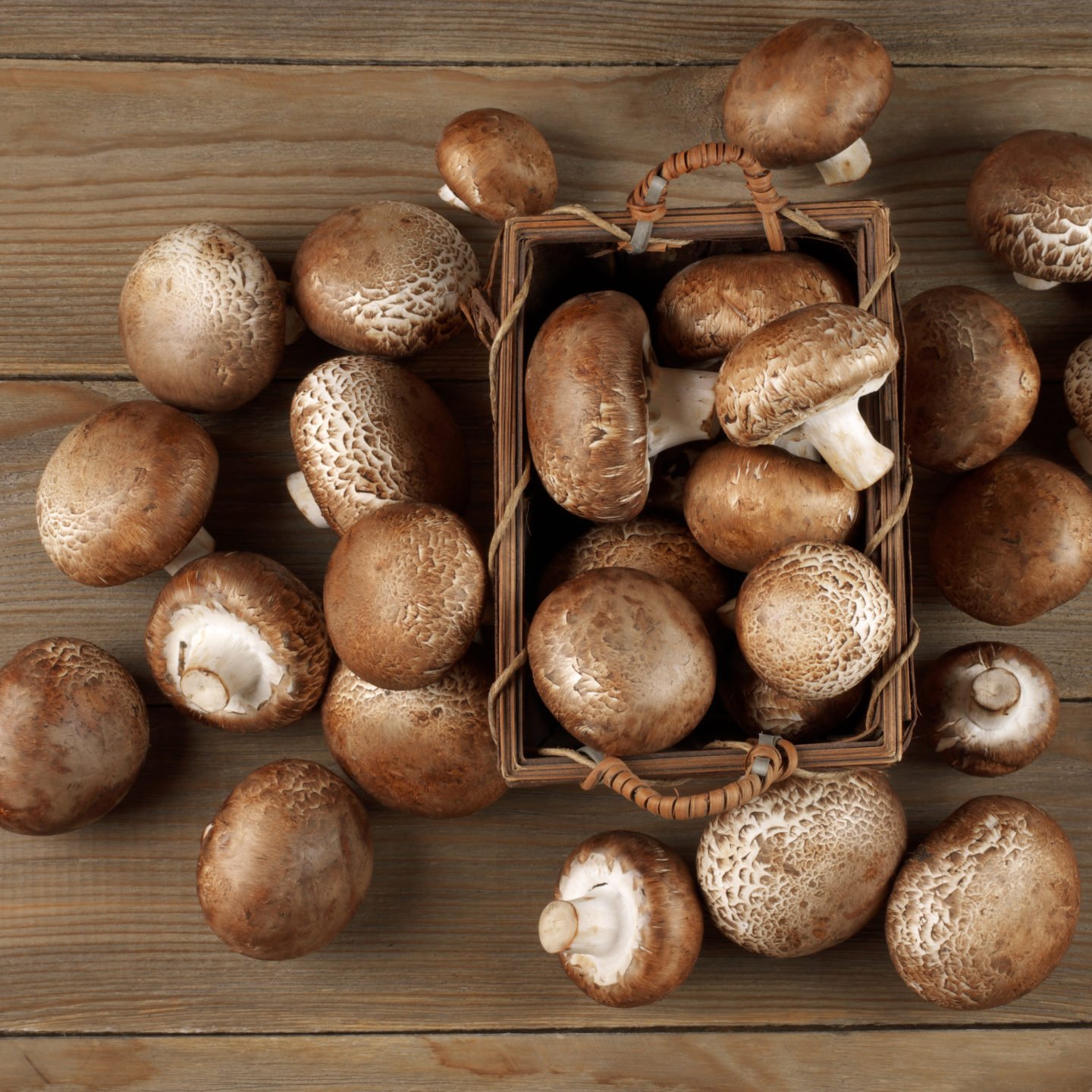 The best substitute for a mushroom is often a different variety of mushrooms. Portobellos and white button mushrooms belong to the same species, but one the older and one the younger. If you’re looking for a non-mushroom substitute, zucchini is a highly versatile option that's easy to find.

But suppose none of those options work for your recipe. You can choose from other cremini mushroom substitutes such as shiitakes, porcinis, morels, maitake mushrooms, oyster mushrooms, enoki mushrooms, chickpeas, lentils, tofu, cauliflower, potatoes, and eggplants. No matter the dish, the perfect cremini mushroom alternative is out there waiting.

Portobello mushrooms are just full-grown creminis, so you can use them in the same way. Just keep in mind that they have a slightly stronger flavor, so they work best in big and bold dishes. You may also want to chop their caps into bite-sized pieces to make them easier to eat.

White button mushrooms, on the other hand, are younger cremini mushrooms. If the size is your main concern, these are the perfect choice as they are just a bit smaller than creminis. They’re the classic mushroom used on pizza, but they also work well roasted, sauteed, or in soup.

Shiitake mushrooms are slightly different from the previously mentioned varieties. They have a mild but complex flavor that is rich and buttery. Even so, you can use shiitakes in just the same way, as long as you remember to remove the stems first.

Keep in mind that shiitake mushrooms are firmer. This makes them good for soup and stirfry, especially when you’re worried about them losing their shape. They’re commonly used in Southeast Asian cooking but are available worldwide.

Porcini mushrooms have a bolder flavor than creminis, so they’re better used in dishes with strong flavors or in small doses. They work especially well shaved over salads and are famous for their use in Italian cuisine. They are similar in size to cremini mushrooms and can be cooked whole or sliced.

Morel mushrooms are prized for their smoky, earthy flavor and delicate texture. Like porcinis, they are stronger in flavor, so they may not be ideal for every dish. They work best alongside stronger flavors, especially beef.

Since they are relatively delicate, they may not be ideal for stir-fry, as they could fall apart. You may also want to soak them in saltwater for several minutes before cooking to ensure no pests remain.

Also known as hen of the woods, maitake mushrooms are well-loved by foragers for their peppery flavor and firm texture. They’re much different than cremini mushrooms but add delicious flavor to any dish they’re a part of.

When preparing maitake mushrooms, the first step is to pull apart the cluster into bite-sized pieces. Once done, they can be sauteed in butter for 10 minutes until they have developed a golden brown color.

Oyster mushrooms have a deep umami flavor that some have compared to the taste of seafood. They are firm in texture which means you can use them similarly to cremini mushrooms. They are commonly fried but can also be roasted, sauteed, or used in soups.

Enoki mushrooms are much different from the others described above, with a long, straw-like shape and very mild flavor. They won’t fool anyone into thinking they’re creminis but can still be a nice addition to food, especially soup. They are quite tough and add a nice texture when used in dishes.

Chickpeas may not have all of the pungent flavors of mushrooms, but they can still be a handy way to fill out a dish. Their mild flavor and firm texture make them a good match for creminis. You can use them in dry and liquid dishes.

You can use canned or dry chickpeas as a substitute, but I find canned has a more similar texture to sauteed mushrooms. If you plan on using dried chickpeas, make sure to soak them overnight before cooking.

Lentils are similar to chickpeas in flavor, offering a mild, earthy taste that goes great with many types of flavors. Of course, they are much smaller in size, so they aren’t a great match for creminis in texture. Still, they can help bring a familiar feel that goes well in braised or boiled mushroom dishes.

Tofu is another product derived from legumes, though it comes in a different form. Soft and very light in flavor, it’s a good way to add body to any dish, especially soups and dishes with a sauce component.

If you want to match the texture of mushrooms more closely, try slicing your tofu and baking it before cooking. This will cause it to shrivel and become a bit tougher.

Make sure to pay attention to its softness when choosing tofu. Soft and medium-soft tofu is ideal for soup, while the firmer variety helps it hold its shape in stirfry.

Cauliflower is crispy when eaten raw, though it can become softer and more similar to cremini mushrooms in texture after it's steamed or baked. Since it’s white in appearance, you might even be able to fool your dinner guests.

Cauliflower is mild in flavor, so it’s best to cook alongside other flavorful ingredients when substituting for cremini mushrooms. You can try brushing it with a little soy sauce before baking to add some umami depth.

While they’re not the most similar to mushrooms in flavor, potatoes are versatile enough to mimic mushrooms in the right dish. The key is pairing it with the flavors that will let it shine. Beef broth is a good option to consider, which goes well with both potatoes and mushrooms.

You can also brown your potatoes too, giving them a little more bite as well as caramelized flavor. The major advantage of potatoes is that they’re always readily at hand. Russet potatoes are a good way to go, but I find fingerlings mimic the shape of cremini mushrooms even better.

If the texture is your main concern when choosing a cremini mushroom substitute, sundried tomatoes could be a good choice. They are sweet and tart in flavor, which is unlike mushrooms, so be sure to pair them with bold flavors. Dishes that already have a fair amount of acidity, like pasta sauce, are a good bet.

Their chewy, meaty texture makes them a good match for cremini mushrooms. They work well in both wet and dry dishes.

Since zucchini are so mild, you can put them in a wide variety of mushroom dishes without overpowering the flavor. Note that they have a firm texture when raw and can take some time to sautee properly.

The great thing about zucchini is that they change their texture depending on how you cook them. A light sautee makes them firm and opaque, which is closer to cremini mushrooms. If you want them softer and a bit sweet, just cook them a little longer.

Like zucchini, eggplant is a mild vegetable that can easily slip into many mushroom dishes. It has an even higher moisture content than either zucchini or mushrooms and can take a long time to cook.

For best results, remove the outer skin of the eggplant before cooking. It is edible, though it is a bit firm and tough, completely unlike the texture of mushrooms.

When compared to other mushrooms, creminis are considered mild and earthy. This, combined with their firm and meaty texture, makes them highly versatile.

How should cremini mushrooms be cooked?

Cremini mushrooms have a relatively low moisture content, which means you can cook them a bit faster than other varieties. Try sauteing them in butter for 8 to 10 minutes or until golden brown. You can leave the stems on as they are tender and delicious.

Can you eat cremini mushrooms raw?

Many people eat raw cremini mushrooms, though you may want to think twice before picking one off a veggie tray. They contain a chemical called agaratine, which is toxic to humans. It breaks down during the cooking process but can harm you if eaten raw.