If you struggle with heartburn, you know how hard it might be to find foods that don’t worsen your condition. Then, there’s also another issue – everyone’s trigger foods are different, which makes this even harder to figure out. 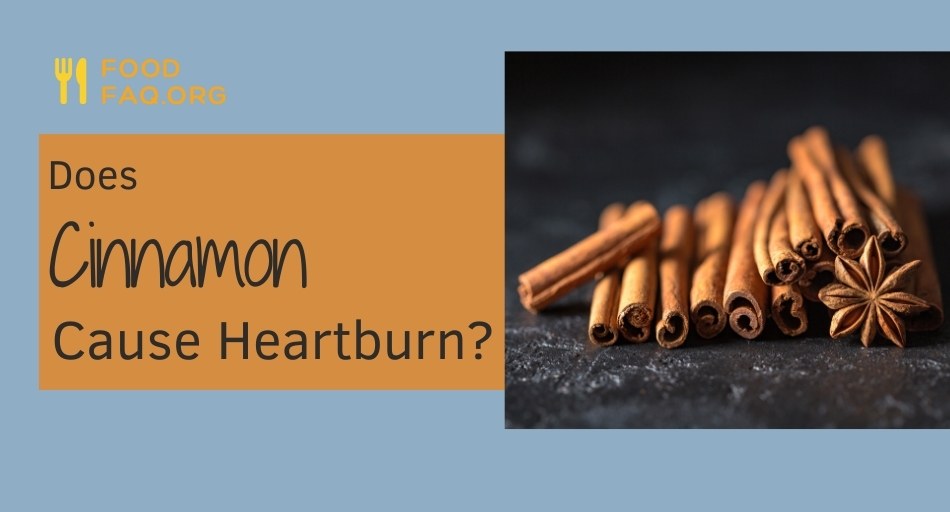 For example, one of the most common spices is cinnamon. Some people say it’s bad for heartburn, but some don’t mind it. So, what does the research say? Does cinnamon cause heartburn?

Does cinnamon cause heartburn?

Cinnamon is actually one of the most alkaline spices, which means that adding it to your dishes or water can help you avoid heartburn. But make sure to do so in moderation, as too much cinnamon can have the opposite effect on your acid reflux and GERD. On the bright side, cinnamon is high in antioxidants that contribute to good health, making this spice a great addition to a healthy, balanced diet.

The pH level of cinnamon varies, depending on its quality, source, and storage. With that said, most commercial cinnamon is alkaline. Because of that, eating it in moderation shouldn’t aggravate your acid reflux or GERD symptoms. In the same way, it likely won’t ease your symptoms either, but it means that cinnamon can be part of a healthy diet for people with heartburn.

Generally, there’s no evidence that cinnamon can trigger acid reflux, especially if you consume it in moderation. But some people may still find cinnamon to be a problematic spice for their digestive tract.

That’s why it’s essential to pay attention to how your body reacts to different foods and adjust your diet accordingly to avoid any unpleasant symptoms.

Is cinnamon good for you?

Cinnamon is loaded with antioxidants – plant compounds that help flush out free radicals from your body. This prevents oxidative stress and damage to your cells and reduces your risk of several chronic conditions like heart disease, cancer, or diabetes.

Because of that, cinnamon is often referred to as a “superfood” due to its high polyphenol content. In addition, since it contains so many plant compounds, cinnamon can also be used as a natural food preservative.

Aside from polyphenols and other antioxidants, cinnamon also contains anti-inflammatory compounds and substances. While occasional inflammation is significant to help your body fight infections, chronic inflammation may lead to various severe health conditions.

Some studies also show that eating cinnamon can help keep your heart healthy. Cinnamon has been shown to contain plant compounds that reduce the risk of cardiovascular disease as well as lower the levels of ‘bad’ cholesterol.

This spice may also reduce your blood pressure, which lowers your risk of strokes and heart attacks. As a result, cinnamon and cinnamon extracts can be very good for people who are especially prone to cardiovascular problems.

Cinnamon does so by preventing numerous enzymes break down carbohydrates after eating, and instead, it releases the slower, which doesn’t greatly impact your blood sugar levels. As a result, eating cinnamon is safe even if you have diabetes.

According to various research, cinnamon contains two special compounds that have been found to prevent the buildup of a certain protein in your brain. This lowers your risk of Alzheimer’s disease and Parkinson’s disease.

These serious neurodegenerative diseases affect the function of your brain cells, impairing your motor functions and negatively affecting the transmission of neurons and nerve signals. Because of that, consuming foods that can potentially protect you against these conditions is very beneficial.

How does cinnamon lead to heartburn?

Currently, there’s no research that proves eating cinnamon leads to heartburn. On its own, it’s an alkaline spice. But if you add it to acidic foods, it may cause acid reflux symptoms, including heartburn.

For example, many people eat cinnamon on bagels and donuts. These foods are high in calories, fat, and added sugar, which all tend to be triggers for heartburn. So, keep that in mind when eating cinnamon-flavored foods.

There are some people, though, that believe that most spices, including cinnamon, lead to heartburn. This isn’t supported by any studies, so it’s hard to determine whether it’s true.

So, if you suspect that the trigger for your heartburn is cinnamon, try removing it from your diet for about 3-4 weeks and see if your symptoms go away. If they do, cinnamon might be, in fact, your trigger, but if they don’t, there might be another cause.

Cinnamon can be a great replacement for other flavoring ingredients like sugar or nutmeg, which tend to be acidic and acid-forming. Replacing acidic spices with alkaline ones can help you control your acid reflux symptoms and even reduce their frequency.

So, while eating cinnamon may not directly prevent heartburn, it can help reduce it when used in place of acid-forming spices.

Some people also swear by water infused with cinnamon, ginger, and apple cider vinegar as a cure for heartburn. This type of water contains antioxidants and nutrients that help flush out free radicals from your body and dilute gastric acid in your stomach.

It’s very easy to prepare and taste great without adding any calories or sugars to your diet. Because of that, it can be a healthy, anti-heartburn replacement for sugary juices and sodas.

If you consume it in moderation, cinnamon shouldn’t cause or worsen your preexisting heartburn. This is because it’s an alkaline spice that doesn’t tend to lead to any acid-related issues in your digestive tract.

What’s more, cinnamon is loaded with antioxidants that help keep you healthy and away from many health conditions. So, between all of these benefits and how easy it is to add to any diet, cinnamon is great for you.