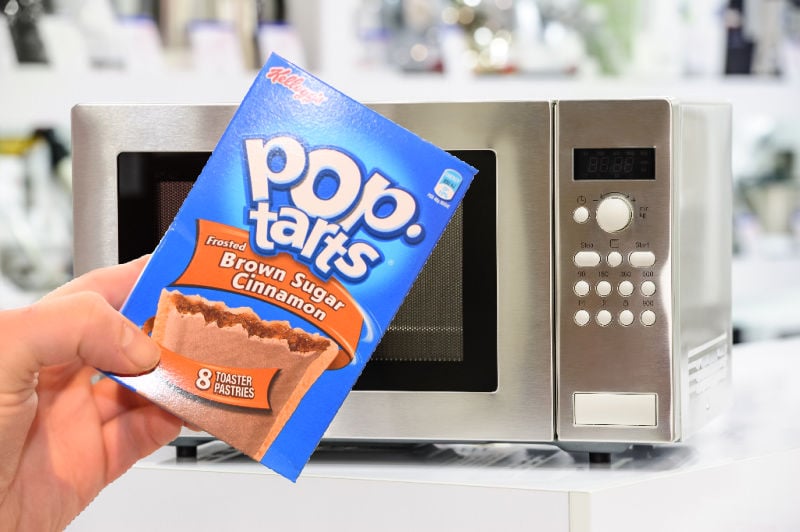 Since the summer of ’64, Pop Tarts have been an American favorite, flipped out of the toaster and onto the breakfast table. But are these pastries suitable for cooking in the microwave oven? We ran some tests and reached out to Kellogg Company to get their advice. Here’s what we discovered.

Are pop tarts suitable for heating in the microwave?

Although the recommended method for heating pop tarts is in the toaster, our tests found that they’re suitable for the microwave. Heat the pastries out of their wrapper on high for three seconds or until you’re satisfied with their temperature. The fillings will become very hot if cooked for too long so use caution when eating to avoid burns. 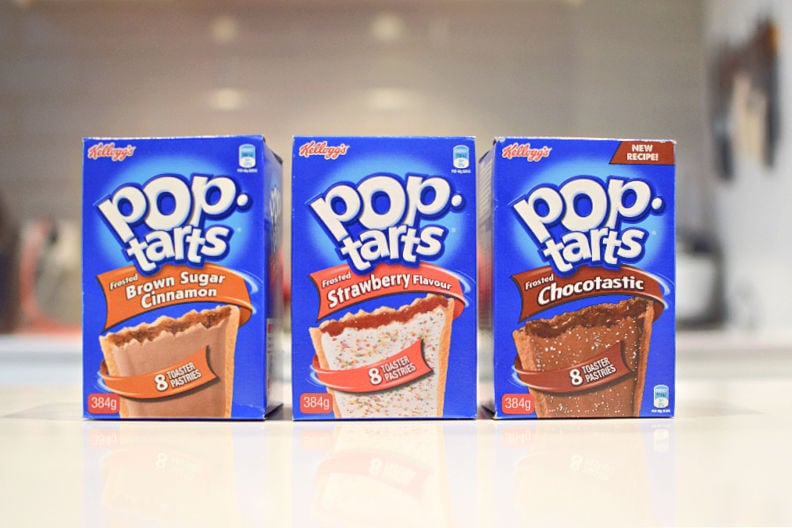 Boxes of Pop Tarts on our kitchen bench.

Kellogg’s, the creator of Pop Tarts, doesn’t seem to have a unified opinion on this question. Their packaging in North America recommends 3 seconds in the microwave. Admittedly, this is a very short amount of time! We can only guess this advice is provided to avoid legal suits resulting from customer burns.

Meanwhile, in other parts of the world like Australia, they’re not taking any chances. As you can see below, I was told not to microwave pop tarts.

Thank you for contacting us regarding Kellogg's® Pop-Tarts.

Please follow the Pop-Tarts Warming Instructions that are on the side of the box. Kellogg's® Pop-Tarts should not be heated in the microwave.

Nate, thank you again for your interest.

We decided the only way to get answers was to compare toaster heating to microwaving. This is what we found: 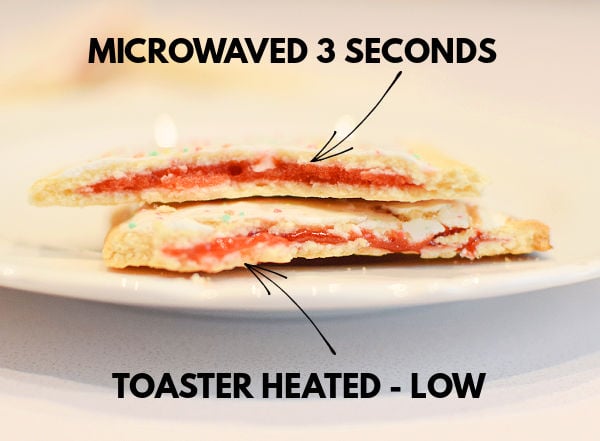 The inside won't be runny after 3 seconds in the microwave.

How do I heat Pop Tarts in the microwave?

Follow these instructions if you need to microwave your Pop Tarts. 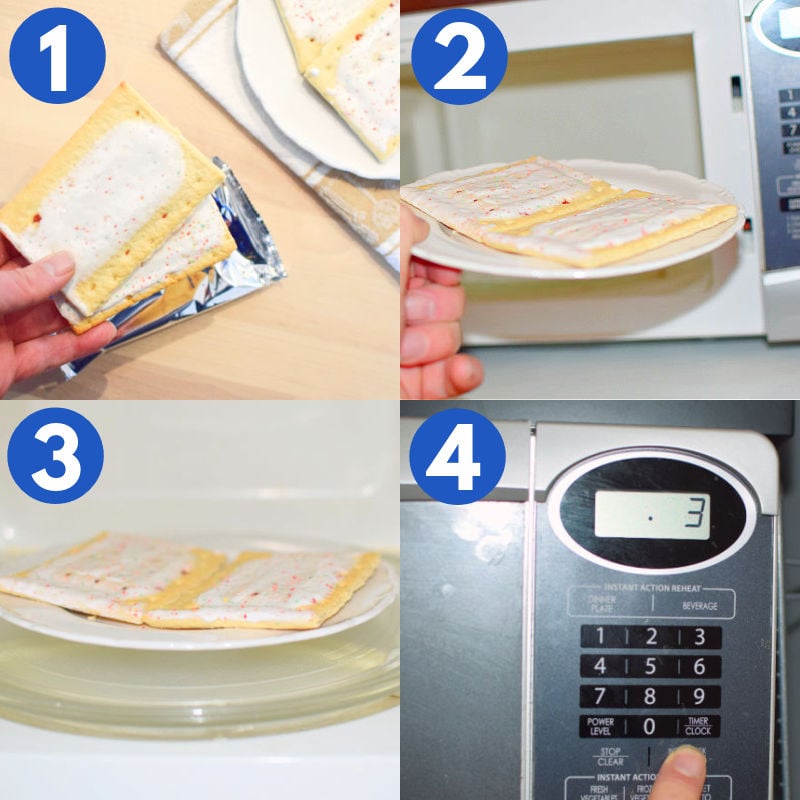 Safety advice: As previously mentioned, Pop Tarts can get dangerously hot inside, even when they aren’t hot on the outside. We strongly advise against heating Pop Tarts in the microwave and then giving them to children or anyone that won’t take caution. Allow them to cool a little before eating.

If you’re considering heating 3 or more Pop Tarts, try using the teepee method. The only difference from the above steps is that you’ll position each tart on its end against the other tarts, like a teepee.

Positioning them vertically will keep them off the plate. It won’t crisp their outside like a toaster does, but it’ll help to stop them from getting soggy.

Interesting reading: Can you microwave Nutella? We tested it out and photographed the results.

How long should I microwave Pop Tarts?

Cooking times in the microwave will vary depending on their brand and wattage. Using an 800-watt microwave, heating for 10 seconds should warm them through; cook for around 20 seconds to get a fully melted inside. 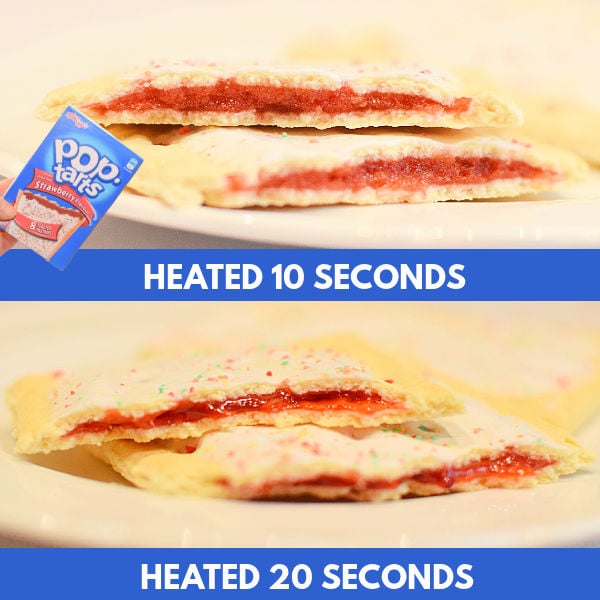 At 20 seconds, the inside was getting quite hot.

How to cook Pop Tarts in the toaster 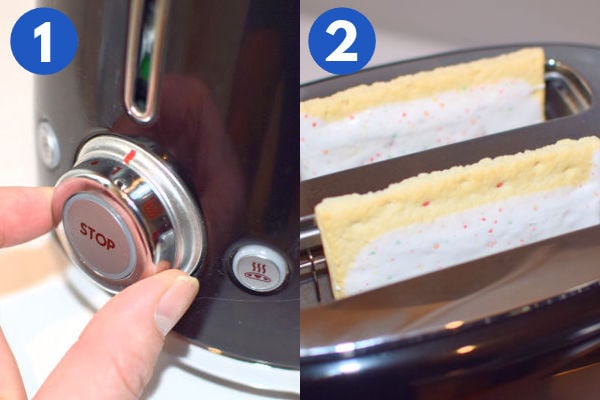 The frosting doesn't melt in a toaster.

Cooking for a crowd? Use a toaster oven to cook several packs in one go.

Watch how to heat Pop Tarts

If you’re unsure about how to heat Pop Tarts, check out this comedian’s effort to explain the heating process.

How to eat pop tarts

Pop Tarts are delicious eaten on their own or used as a substitute for Graham Crackers when making s’mores. They can be crumbled over desserts like parfaits, layered into trifles, or blended into a smoothie. 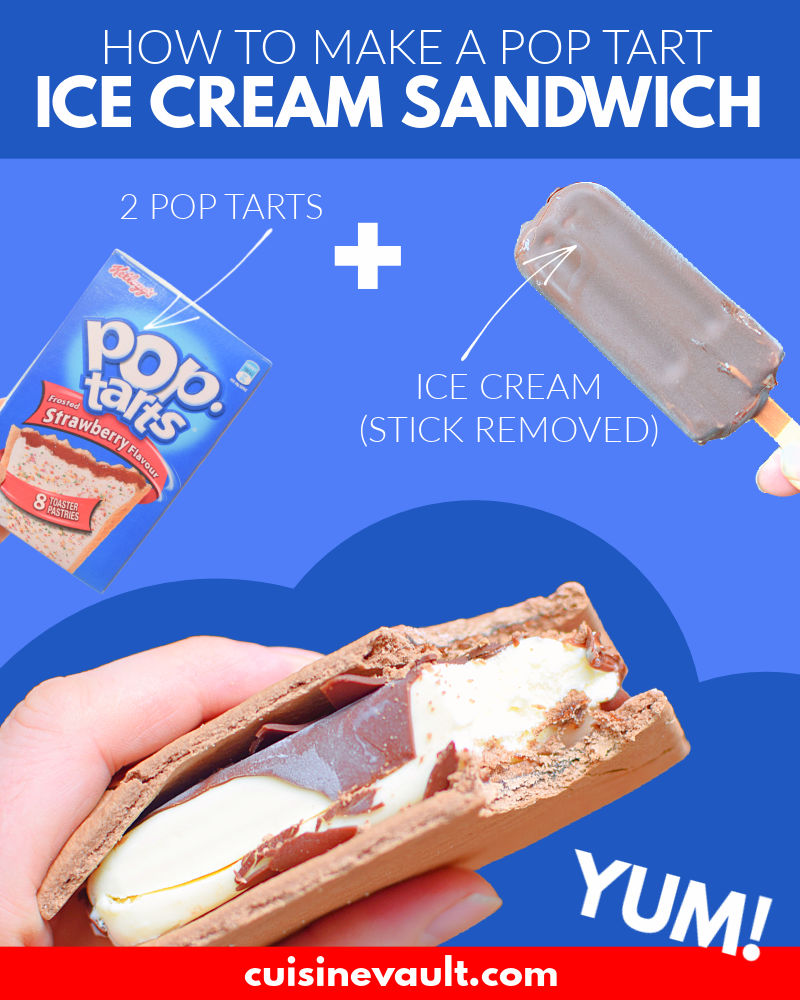 Are pop tarts supposed to be toasted?

Pop Tarts are already cooked, so they are suitable for toasting or eating straight from the bag. Some people enjoy freezing Pop Tarts and eating them directly from the freezer.

Where can I buy Pop-Tarts?

You can buy Pop Tarts at most grocery stores or other large retailers like Target or Walmart. If you have trouble finding them in a store near you, they’re readily available from online stores like Amazon.

When you toast Pop Tarts, does the frosting melt?

The frosting on Pop Tarts is made to be cooked in toasters, so it won’t melt or run. However, it will get very hot if cooked too long so take care once they’re cooked.

How do I store Pop Tarts?

Pop Tarts can be stored unopened in the pantry for 6-12 months. Once opened they’ll last 7-14 days before they lose their quality. Pop Tarts can also be frozen in freezer-proof bags or airtight containers.

The aftermath of our taste-testing. Now to go for a run.

While Pop Tarts can be heated in the microwave, it’s hard to think of a reason why you would. A toaster will give your snack a better taste and it’s almost as quick as a microwave. Toasting is also a safer option, heating from the outside in. You’re less likely to get an unpleasant surprise from molten fillings that scald.

If your only appliance is a microwave, then you can start by following the 3 second cooking time provided on the pack. To get your pastries warmer, heat in additional short bursts. In an 800 watt oven, two Pop Tarts will need at least 10 seconds to get some warmth through them.